Venessa Manzano (extreme right, in red) started the Filipino School of New York and New Jersey, which has students as young as 4-years-old to as old as 80. CONTRIBUTED

OAKLAND, California — Although most Filipino Americans, born and raised in the United States, have never heard to speak and understand Filipino (Tagalog), many of them are showing interest in classes that offer the chance learn their parents’ native national language.

Hawaii-born Venessa Manzano, who grew up in Massachusetts with parents from Silang, Cavite, began pondering with her friends how to raise children with their Filipino identity intact.Manzano works as a full-time fundraiser at an academic medical institution in New York City and currently resides in New Jersey with her husband and three children.

She thought of setting up a Filipino cultural school and conducted market analyses using online surveys, telephone conversations, emails, and face-to-face meetings with friends, peers, community leaders, and leaders of other ethnic cultural institutions (i.e. Koreans, Chinese, Filipino, French, Spanish). The research took her up to three years before she piloted a small class for children in 2008. 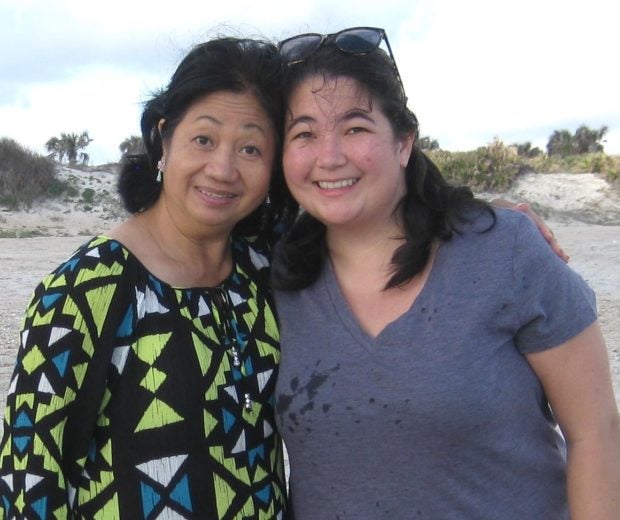 Mother and daughter Esperanza (left) and Jennifer (right) Elliot have started speaking more in Tagalog to help Jennifer practice the lessons she learned so far. CONTRIBUTED

“I may have been born and raised in the US, but I learned how to speak Tagalog fluently because my Lola on my dad’s side as well as my parents spoke to me in Tagalog at home. I also watched TFC and read Filipino comics while growing up, and wrote to my cousin in the Philippines (my pen pal) in Tagalog,” Manzano recounted.

Not a teacher by profession, she took a class on teaching bilingual education for elementary school children at Bank Street College of Education in New York City, where she learned how to write a lesson plan and recite it in advance.

Students at Manzano’s Filipino School of New York and New Jersey are as young as four and as old 80. They’re Filipinos and non-Filipinos alike, with some traveling from as far as Connecticut or Pennsylvania to attend her programs and events.

Manzano’s challenges included finding a space to hold a class that’s accessible and affordable and getting students to enroll, especially younger students who have many interests like sports, music lessons, etc. 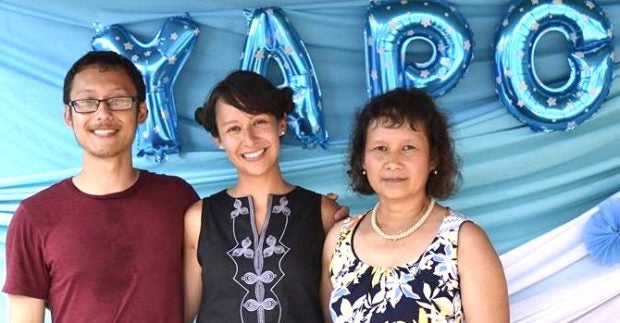 She said further: “We should encourage our parents and elders to continue speaking the languages at home and be more supportive of whenever someone who is trying to speak and learn it is not made fun of to discourage them. We need to work together with the Philippines in not just promoting food and travel, but the arts, languages and history of our people all over the world. This experience has also made me realized that the work I am doing is one of my life’s purpose.”

One of Manzano’s students is Jennifer Elliott, born and raised in Jacksonville, Florida, who is in her thirties and whose mother, Esperanza, lived in Hagonoy, Bulacan before coming to America.

“Although I grew up with my Filipino grandparents constantly present, and Filipino cousins I never learned Tagalog.  While my mom would speak Tagalog to my grandparents she would never speak it to my American sad as he did not know the language.  As a result, English was my first and only language,” Elliot recalled.

She went to college at the University of Florida majoring in theater and astronomy, and then on to graduate school at Seton Hall University majoring in museum professions all speaking English.

Several years ago, Elliot and her cousins in New Jersey discussed how they could all learn Tagalog. They looked into the online language learning programs such as Rosetta Stone but never actually followed through, until another cousin in Florida told her how much strengthened her language skills in time to go on a trip to the Philippines.

“So, I started looking I originally looked at local universities, but the cost was a little too high for my budget until I found the Filipino School of New York and New Jersey through a Google search.  The classes offered were much more reasonable in terms of cost and the time and location worked well with my job,” Elliot remembered.

Learning to be patient has been difficult for her.
“I am still very much a beginner in speaking Tagalog and I am (still) working on not letting that fact frustrate me.  What I have loved most is how it has brought me a little closer to my family and brought my family a little closer to me.  I practice speaking to my mom in Tagalog, and I text and email my cousins in Tagalog. Not being able to speak to my grandparents and relatives in Tagalog was something I always regretted, and not understanding my mom’s native language was something I felt I missed from my childhood.”

In California, co-founder of the House of Gongs (kulintang) Lydia Neff found that there is

a hunger among Filipino Americans to connect with their Filipino identity, especially since there are traumas related to living in the diaspora.

“I felt the need to address that through language. Most of those who attempted to learn have stories where, while growing up, when they attempt to learn or speak the language, they are often either made fun of, or not encouraged to speak the language at all because of their parents worrying about them having accents,” Neff related.

“These are examples that some people might just laugh about or maybe ignore because the reality is we are in an English- speaking country. However, I believe that language could be one of the bridges to giving them the confidence and the capacity to identify as individuals in the diaspora with Filipino roots.”

These firsthand experiences made Neff realize that she could make an impact as a teacher by creating a space where they can safely express themselves even just by attempting to pronounce simple/basic Tagalog words.

“The way Tagalog is expressed is just very different than just making a statement in English and I think that that’s one thing that a lot of Filipinos in the diaspora are longing for,” Neff observed.

Unlike Manzano, though, Neff her teaching began with a trial run for a three-week beginners’ class, and before she knew it, she had to put people on a waitlist and turn down many as she can only accommodate 30 students from about two hundred applicants.

As far as the manner of teaching goes, Neff decided it’s best for beginners to start from scratch, track iback to most Fil-Am’s childhood trauma as a part of their healing as well.

“I get different issues in every class I handle, but then again, when I’m faced with that, I start from the basic reason I’m doing this — healing and part of a decolonization process.”

“This is just as healing to me as it is to my students. I get to speak my language that I deeply miss and at the same time, I’m helping people heal themselves from language traumas. Being able to identify that gives me a good perspective of how I want to approach my future as well,” Neff sums up.

Neff’s student, Berkeley California resident Annalisa Yapo Belliss, an environmental educator in Alameda County, whose mother come from Nueva Ecija and who has lived almost her life in California, admitted feeling left out like her American dad in get-togethers with other Filipinos. It didn’t help that her mother, Tessie Yapo Belliss, thought it best to not teach Tagalog to her and her brother, Davy Jay.

“I had Filipina friends in middle and high school who taught me a few basic words but I never was able to learn how to speak or understand. When I went to college, I looked into taking a Tagalog course but it was not offered and only heard about Lydia Neff’s lessons through the I-Hotel in SF from a friend who had seen them on Facebook,” related Belliss. 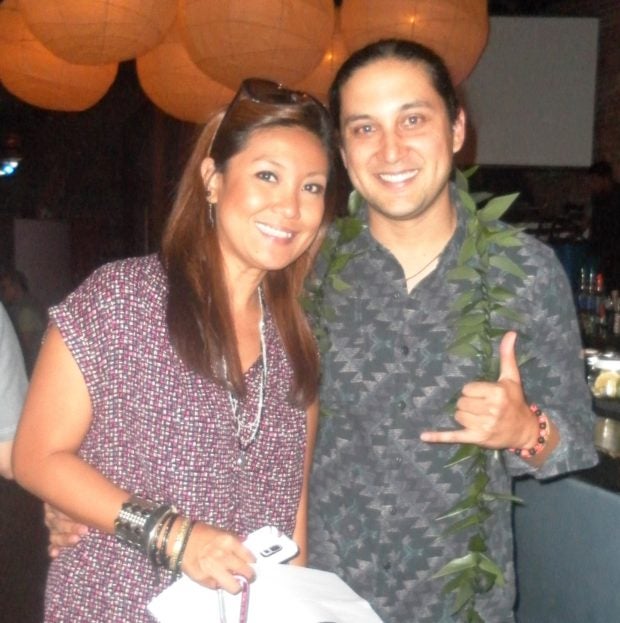 House of Gongs co-founders Lydia Neff (left) and Ron Quesada have been speaking more in Tagalog in their home to enhance each other’s grasp of the language.  CONTRIBUTED

“Being a hapa, or mestiza, I’ve learned that my appearance doesn’t usually reflect my Filipino heritage to others, caused me not to be able to connect with other Filipinos when I attend events or even go to Philippine grocery stores and restaurants have caused me pain. Having the ability to communicate in Tagalog, even if it is just saying ‘Salamat po’ gives me the opportunity to connect with kababayan, to communicate to them that I am one of you and we share a common home.”

Belliss also considered moving to the Philippines for a while to teach and work as an artist, so learning Tagalog now would help her prepare for it. She also is working on a project which incorporates Tagalog phrases translated into English in art and fashion to be exposed to Tagalog on a daily basis.

“I have only been attending Lydia’s lessons since the beginning of 2018, but I’ve already learned so much and I’ve found that it has really helped me reclaim my identity as a Filipina,” Belliss said.

“I actually had the chance to practice what I learned in the Philippines this summer: my mom, my kuya and I went to visit family there for three weeks. It was very empowering because I realized that I understand a lot more Tagalog than I thought I did! Many of my relatives are shy to talk to me in English because they think their English is bad, so it was a great opportunity to show that I am no expert in Tagalog either–it has definitely helped to bridge a divide that I felt often as a child. I felt a lot more part of the family, instead of an outsider.”

At the moment, the biggest challenge is making time to practice, and it’s a big help that Belliss has Filipino American coworkers with whom she practices her comprehension. She reads books by Pilipino authors and record vocabulary that she doesn’t know and revisit her list to remind herself of their meaning.

“I am sad to also learn that in the Philippines, students are being taught exclusively in English after a certain grade level–this made me very sad to hear, because I can foresee native Filipinos willing to lose their language in their home country! This makes it even more important for us to preserve our language abroad and take pride in it.”