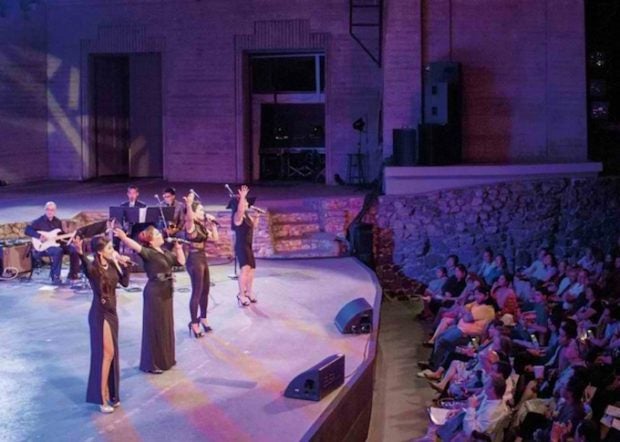 Serenata Ver. 2.0 will be at the historic Ford Theatres in LA. CONTRIBUTED

LOS ANGELES — Prominent Filipina American singers will get together for an evening of nostalgic Filipino hits and more on October 7 at the historic Ford Theatres.

Heading the pack are jazz diva Louie Reyes and vocalist Annie Nepomuceno, both of whom have graced the Ford stage multiple times.

High-caliber performers Reyes and Nepomuceno honed their vocal expertise and award-winning talent in the Philippines, where they established active music careers. Both singers continue to perform in the diverse cultural landscape of Los Angeles.

Reyes and Nepomuceno will put new twists on beloved songs, from Original Pilipino Music (OPM) to popular songs by artists that made an impact on both their lives. Backed by a live band led by musical director Lorrie Ilustre, the evening promises to be a vibrant celebration of the female voice.

Interestingly, both women played Lady Thiang in “The King and I,” for which Reyes made a celebrated move to Australia for the role in the early ‘90s, joined by her son Paolo, who played the young prince. Nepomuceno played the role opposite Deborah Gibson, an ‘80s icon who transitioned to Broadway, for the Thousand Oaks Civic Center run in 2009.

Reyes’ legacy is being the vocalist of choice for top American jazz artists that toured the Philippines. She has performed with Noel Pointer, Bob James, Joe Sample, Dianne Reeves, and David Benoit. She was pulled from the audience in a Stevie Wonder concert in his first concert in Manila at the ULTRA Stadium. Wonder was blown away by her singing pipes, according to the news article in Woman Today magazine (1988).

Both Reyes and Nepomuceno, also hail from popular singing groups. Reyes continues to travel to Manila for reunion performances with The New Minstrels, a popular vocal group which started in the late ‘70s.

Nepomuceno was the pop soloist and one of the official arrangers of the world-renowned Philippine Madrigal Singers, one of the most awarded choirs in the world. She continues to do commercial and session work and has made two albums with her pop vocal trio Three of a Kind, Bay Area champs of the Harmony Sweepstakes, a popular acapella competition.

Guest artists are hit-maker Odette Quesada, songstress Geneva Cruz, and host G. Tongi, who will round out the “Pinay Power” (Filipina power) theme. Quesada, often hailed as the “Carole King of the Philippines,” penned her first hit at the age of 17. Her vast catalog of hits, mostly written in English, continue to be remade and used in films and TV. She has won many songwriting competitions and is known for her hits “Don’t Know What to Do,” “Give Me a Chance,” “Til I Met You” and many others.

Cruz is from a celebrity musical family and started her career as a preteen in the celebrated group of Maestro Ryan Cayabayab, Smokey Mountain, where she performed the hits “Kailan,” “Mama,” and “A Better World.” Her solo career brought her more hit records “Pangarap Ka” (You are My Dream), “I Like You” and “Anak ng Pasig” (Child of Pasig River).

Tongi, a professional actress and former TV host on KSCI LA18’s “Kababayan Today,” will join in some songs aside from serving as emcee. In addition to stage roles in the “Vagina Monologues” and East West Players’ “Crying Ladies,” she has sung in concerts with Quesada and Maestro Cayabyab.