In death, Sen. McCain is given a pass

In death, Sen. McCain is given a pass 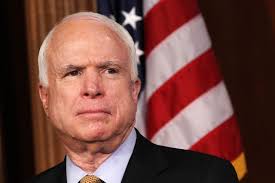 The ironies of history were all around us and at Dawn Mabalon’s wake and funeral in Stockton last week. It was hard to ignore all of them.

Dillon Delvo and Mabalon co-founded the Little Manila Foundation, a non-profit that successfully preserved the historical buildings in downtown Stockton that were once the center of Filipino American life in the U.S.  At his eulogy for Mabalon last week, Dillon Delvo took note of Mabalon’s vision.

One of the biggest hurdles for the community, he said, had been overcoming a colonial mentality, the hangover from centuries of colonial rule. Delvo defined it as the “internalized attitudes of ethnic inferiority from the effects of colonization and a corresponding belief that the cultural values of the colonizer are inherently superior to one’s own.”

It was a great line that struck a nerve among all who remember the Philippines as the U.S.’ first colony.

Yes, Dawn was among the most decolonized. But it was made even more ironic when her services were held in a Roman Catholic church, a church that without question supported strong xenophobic, anti-Filipino U.S. efforts to repatriate Filipinos back to the Philippines in 1934.

The church was not a friend to the community, and Dawn in her groundbreaking “Little Manila is in the Heart: The Making of the Filipino/a American Community in Stockton, California,” went into detail to show how segregated and racist the church was toward Stockton’s Filipinos starting from the ’30s, on. Add to that last week’s damning grand jury report of the Catholic Church in Philadelphia’s decades of sexual abuse, as well as reports that Pope Francis knew and participated in the coverup of the abuser, Cardinal Theodore McCarrick in Washington, D.C., and the thought that we were in a Catholic church to celebrate the life of an activist/historian, I’m sure, would have made even Dawn Mabalon walk out.

She would have preferred her memorial in a labor hall. But a Catholic church, a symbol of centuries of Spanish colonialism?

Our lesson for the day may be that even the most august institutions and individuals still need to be held accountable for all their sins. They don’t deserve a pass.

From the Catholic Church to the late U.S. Senator John McCain, it’s in the history.

Hard to forget the “gookiness” of McCain

When Richard Nixon died, I recalled writing his obit while working in Washington, DC. Here was the man who, until recently, may have been the worst president ever who considered himself above the law. But apparently, that’s like high-rise living. There’s always someone one floor above you.

Still, when Nixon died, people hardly dwelled on Watergate and seemingly everyone found something good to say about RMN. The EPA (Environmental Protection Agency) was started under his watch, hooray! What a nice Republican idea?

The idea of a deathbed conversion among the living is real when it comes to obits. With Nixon, it may have been a tad extreme.  But we can see it happening to a degree right now with the late Senator John McCain: war hero, principled Republican, and a man loose with the tongue when it came to Asians and Asian Americans.

Can you say “gook” without grimacing? John McCain could. Forgive and forget?  Does death give one a free pass? Were you feeling so deeply sympathetic that you were ready to declare “John McCain is the Republican I’d want to be!”

A little history is needed. Some of us still remember in February of 2000, Sen. John McCain was called on the carpet for his use of a racist slur to describe his Vietnamese captors.

McCain called them “gooks.” And when he could have apologized, he didn’t. In fact, he doubled down.

“I was referring to my prison guards,” McCain explained to reporters while campaigning in 2000, “and I will continue to refer to them in language that might offend some people because of the beating and torture of my friends.”

His defenders were his own political operatives, of course. “If people understood the context, they wouldn’t be upset,” Mike Murphy, a senior adviser to the campaign, was reported to have said.

But I understand the context. Here was a man who wanted to be president of all the people. And instead of comforting Asian Americans who would vote for him, he chooses to alienate them in the present with a slur from the past.

And what would he think if he saw an Asian face he didn’t know? What would his first thoughts be? “Gook”?

“Gook” is a historically offensive term, beyond McCain’s experience. It is the all- encompassing Pan Asian slur. One size fits all. It has been used to racialize and fan the hate in the inhumanity of war.

It was first used for the Filipinos during the Spanish American War. Does anyone remember that one? It spilled over to the Philippine Revolution and ended up with an estimated death toll in the Philippines at over a million civilians.

Since then, the name gook has applied to every Asian on the other side of an American gun. Chinese. Japanese. Vietnamese. Koreans.

That’s one hell of a hateful word. Makes the “N-word” seem tame. Essentially, it’s a hall of shame-worthy slur. But no one bothers saying, the “G” word. It’s not thaaaaat offensive, right?

When McCain had a chance to recant during a campaign push in 2000, McCain didn’t. It took him awhile, but as reported in the Washington Post, McCain did ultimately apologize a few weeks after the incident:

“I will continue to condemn those who unfairly mistreated us,” McCain said. “But out of respect to a great number of people whom I hold in very high regard, I will no longer use the term that has caused such discomfort. I deeply regret any pain I have caused.”

He concluded, “I apologize and renounce all language that is bigoted and offensive.”

Good enough? It doesn’t quite undo the pain. And surely, it didn’t alter the continued use in society of offensive ching-chong accents to diminish the status of Asians and Asian Americans.

To use an extreme example, if a murderer confesses and apologizes, and even if we forgive him, one person is still dead.

Sure, I can have some respect and compassion for McCain. Especially, when he has seemed reasonable on a few issues.

But even there, as a former colleague Norman Soloman has pointed out, McCain doesn’t have a particularly great record.

Remember Saddam Hussein and the Iraq invasion? McCain was part of the demonization of Saddam.

McCain also said the war would be over in short time. Famous last words. As Solomon points out, McCain was just plain wrong. But what did we expect? His donors show the true heart of a corporate politician with the standard influencers bankrolling him: Merrill Lynch, JPMorganChase & Co, Citigroup, AT&T, Goldman Sachs.

Standing up to Trump, and having both Bush and Obama deliver his eulogy, may seem uniquely high-road bipartisan in these troubled times.

But in the end, McCain, the great man, has always been a pure pol. He picked the ever-polarizing Sarah Palin in 2008 as his low road running mate to prove it.

Oh, he later regretted that move, too. Just t like when he had a chance to be inclusive toward Asian Americans and stop using a slur, he initially passed.

He was basically that kind of guy. His first move tells the truth.He cared about his own political skin, before he cared about any of us.

Even in death, we shouldn’t forget that.

Emil Guillermo is a veteran journalist and commentator. He remembers Dawn Mabalon during a performance of his “Amok Monologues,” plus a storytelling workshop.  Sunday, Sept. 2, 2pm at the Filipino National Historical Society Museum, 337 E. Webber in Stockton. In the workshop, people are invited to share their stories of Mabalon and/or Filipino history.

Donation $10 to benefit the museum and Little Manila.