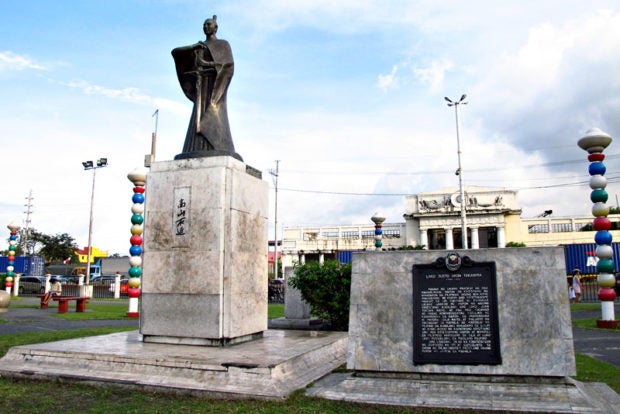 The statue of Justus Takayama Ukon, a 17th-century samurai lord, or daimyo, and a Catholic, in Plaza Dilao, Paco, Manila.

KANAZAWA, Japan—Some years ago, on my way to a lunch in Paco, an old district of Manila, I noticed a rather unusual statue in the middle of a small plaza that fronted the old railway terminal. Due to traffic, the taxi I was in barely moved, giving me time to note that the statue was of a man clad in a kimono, with a topknot, and holding a katana, or traditional Japanese sword.

Who and why was this Nihonjin being memorialized in Manila?

An Internet search revealed his identity: Justus Takayama Ukon, a 17th-century samurai lord, or daimyo, and a Catholic one at that, Justus being his baptismal name. The site was Plaza Dilao, or Yellow Square, most likely so-named because the district was where a majority of approximately 300 Japanese Christian exiles had settled in 1615, headed by Lord Takayama.

Takayama and his cohort of Christians left their native shores due to the Tokugawa Shogunate’s increasing hostility towards this religion brought from the West, Both Christian missionaries and their Japanese converts were deported but just as often put to death. Due to his noble status and faithful service to the Shogunate, Takayama was allowed to leave gracefully, along with his family and clan. And so they set sail for Manila in late 1614, where they were welcomed by the Spanish.

Lord Takayama and his family resided in the Jesuit guesthouse Casa San Miguel in the Walled City, or Intramuros. The other Japanese Christians settled in the encomienda of San Miguel, which formed part of the Jesuit parish of Quiapo. Many of them subsequently moved to PlazaDilao in Paco, joining an older and more motley Japanese community made up merchants, soldiers of fortune, runaways, and shipwreck survivors.

The Spanish saw in the daimyo(or lord) a potential ally should they attempt to invade Japan—an ambitious if foolish scheme that never got off the ground, mainly because Takayama succumbed to a tropical fever (possibly malaria) in early 1615, a little more than a month after arriving in Manila. 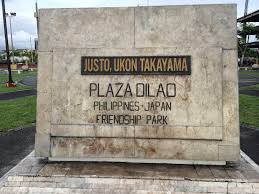 In Martin Scorsese’s film The Silence, based on Shusaku Endo’s novel of the same name, the perils of being a Christian in 17th-century, Edo-era Japan are portrayed graphically. Two young Western Jesuit priests agonize over whether to apostatize or not, given that their mentor, who had gone on ahead to Japan, had indeed apostatized, in order to be spared his life. The film has scenes of martyrs being crucified in the waters just off the shoreline, so that the incoming tides would drown them, if they hadn’t already died by then.

Indeed, the very first Filipino saint, San Lorenzo Ruiz, and three Spanish friars, a Japanese priest, and a leper—part of a mission to Japan—were canonized for their preternatural devotion to Christianity. On 27 September 1637, Ruiz and his companions were tortured by being hung upside down over a pit. Ruiz died from loss of blood and suffocation. His body was cremated, with the ashes thrown into the sea.

All this history bubbled up once again in my mind last week, as my wife Midori, myself, and Rebecca, a friend, took the express train from Kyoto to Kanazawa, to visit its contemporary arts museum and walk around its historic district and magnificent Kenrokuen Garden. I had no inkling that Takayama Ukon and his family had in fact been the rulers of Kanazawa. It was only in conversation with our cab driver that Takayama’s story came up, as the driver narrated a brief history of the Kanazawa Castle.

Early last year, for his refusal to abandon his faith, Takayama was beatified, and is now Blessed Justus Takayama Ukon. He is thus a candidate for sainthood, and the complex process of making him one has begun.

As interesting as Takayama’s odyssey is, I wonder at the fate of those Japanese Christians who survived him, including another nobleman: Lord John Tokuan Naito. What was his fate? Did he and any others return to Japan? Were there marriages with Filipinos? Where are their descendants today?

Long before the Filipino diaspora began in Japan, that of the Japanese in the archipelago had already formed. It’s a tantalizing thread of history that invites further examination.