LOS ANGELES — More than 400 friends, family members, community leaders and activists came to a memorial mass Feb. 5 at the Assumption of the Blessed Virgin Mary Catholic Church to celebrate the life of Gregorio G. Santillan, a scientist and an activist and a highly respected Filipino community leader in Los Angeles and Southern California.

On January 26, he quietly passed away in his sleep in his home in Pasadena, having succumbed to an extremely rare and aggressive cancer. He is survived by his wife, Elvie Castillo Santillan, his constant companion and partner, and his two adult children and their families – his son, Andy, and daughter, Lisa, and by his two brothers Leandro and Tirso, Jr.

While Greg, as he is known to friends, had spent most of his life in the U.S., he fought for the restoration of democracy in the Philippines while at the same time speaking out against discrimination and injustice in his adopted country. He co-chaired the Los Angeles Anti-Martial Alliance (AMLA), later known as the Coalition Against the Marcos Dictatorship, an alliance of individuals and groups opposed to the dictatorship of Ferdinand Marcos. He helped raise funds for political prisoners and locally pushed campaigns to end US support for the Marcos regime. 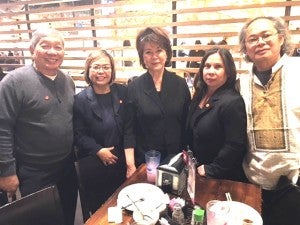 When Marcos was deposed in 1986, Santillan was among the initiators of Tulong Sa Bayan (Help for the Country) to help with reconstruction efforts in the Philippines and in responding to natural disasters. As an immigrant with family members and friends in the medical field, Santillan fought discriminatory practices against Filipina nurses who were being recruited to work in US hospitals. He advocated for fair licensure exams and better treatment for foreign nurse graduates in the 1970s.

A common denominator linked the attendees—diverse in ages and ethnicities–at Santillan’s funeral: deep sadness in losing their “light” and leader so early.

Retired professor Carol Ojeda Kimbrough remembered Santillan at the helm of the local chapter of the Union of Democratic Filipinos (KDP) in the ‘70s and ‘80s and as a protagonist in the politics of the Filipino American community of Los Angeles (FACLA) the renowned organization in Historic Filipino Town. Santillan, newly transplanted from Philadelphia, went straight into the thick of local Fil-Am politics, with the goal of making FACLA relevant to the community’s need for empowerment. 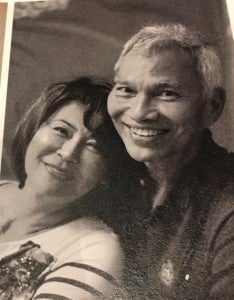 Santillan was born on September 27, 1947 as the youngest son of Tirso Santillan and Lilliana Guerrero in Manila. To date, family refers to him as “Winnie,” a nickname he earned as a toddler after his bald and chubby likeness to Winston Churchill and his fondness to giving speeches on top of a coffee table.

Retirement, however, was not part of Santillan’s vocabulary because, as a written tribute to him stated, “Although recently retired as a Chemistry Professor at Cal State Los Angeles, Greg never retired from being a husband, father, and grandfather to his three grandchildren, Dantes, Cybellia and Lilly.” Some of Greg Santillan’s fellow activists celebrating his life. FACEBOOK

Santillan’s wife, Elvie, sometimes forgets that he is no longer around physically and at times when someone mentions a great restaurant and a good place to visit, she said, “I instantly comment, I’ll tell him, he would like that.” She added: “His passing was so sudden I thought we would both have each other in old age.”

He may be gone, but Greg Santillan’s humility and commitment to justice would be remembered by members of the Filipino American community as standards for any one answering the call of service to the people.