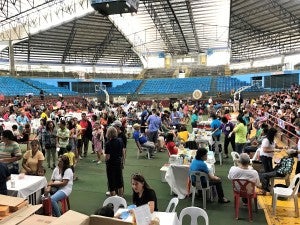 Over the five-day mission, outpatient medical services were provided at the Lamberto Macias Sports Complex from 7:00 am to 5:00 pm each day. CONTRIBUTED

ALAMEDA, California — More than 170 doctors, nurses, health educators and volunteers from Northern California have just completed a five-day medical mission to the Philippines, providing much needed medical, dental and surgical services to over 9,000 low income residents of Dumaguete and neighboring towns in the Negros Oriental province.

This was the first of many collaborations that have been initiated as a result of the sister city relationship between Alameda and Dumaguete. 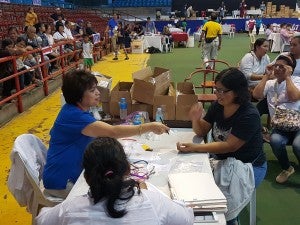 Dumaguete was selected in 2015 to be the site of the medical society’s 40th mission site after then-Dumaguete Mayor Manuel Sagarbarria –- now a member of the Philippine Congress person visited Alameda to initiate a sister city agreement.

Alameda Sister City Vice President Cynthia Bonta, who serves as chairperson of the Alameda-Dumaguete Sister City Committee of ASCA, reports that this was the largest mission to go to that area.

The Alameda side of the sister city partnership worked side by side with the local committees to host the 170 volunteers.

Each mission takes two years to plan: The Medical Society recruited physicians, nurses, and other health care professionals who were willing to volunteer their time including paying for their own air fare and expenses and solicited donations of medical supplies, equipment, and funds.

The host city took responsibility for outreach and pre-screening of patients, securing the facilities for surgical and outpatient procedures and assisting in logistics like housing and transit for the volunteers. 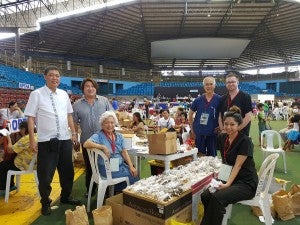 Negros Oriental Chinese Chamber of Commerce President Eduard Du (left) who acted as liaison between the province, city and the mission delegation with ASCA Vice President Cynthia Bonta (seated in blue) and other medical mission volunteers at the outpatient staging area. CONTRIBUTED

Major and minor surgical operations were provided at the Negros Oriental Provincial Hospital, and outpatient cases were seen at the Lamberto Macias Sports Complex.

The Alameda Sister City Association has pledged $5,000 to the mission to help pay for the supplies, hosting a meal for the volunteers and the purchase of two CPR mannequins to help in training health providers in the Philippines, one named Alameda and the other Dumaguete.

Donations are still being accepted.  Checks should be made payable to Alameda Sister City Association (ASCA), a 501(c)(3) nonprofit public benefit corporation for tax deduction to the full extent of the law and mailed to Cynthia Bonta, P.O. Box 6255, Alameda, CA 94501.For additional photos, visit the medical society’s Facebook page: https://www.facebook.com/pmsnc/