Kultura Festival is in its fourth year and is produced by food, media, and events company Filipino Kitchen.

Carefully curated to appeal to those who personally identify with Filipino culture and the merely curious or uninitiated, the festival aims to highlight the best in Filipino American food and arts in Chicago, the Midwest, and beyond.

This year, Kultura Festival is honored to be a part of the inaugural Chicago Tribune Food Bowl, a three-week long celebration of “chefs, restaurateurs, mixologists, innovators, entrepreneurs, critics, and connoisseurs who put Chicago at the forefront of the nation’s food and drink scene.”

Kultura Festival will showcase Chicago-based Filipino American chefs such as Elaine Townsend (pastry chef at The Bakery at Fat Rice), Top Chef and Chopped: Grill Masters alum Chrissy Camba, Cutthroat Kitchen and Chopped: Cheap Eats contestant Kathy Vega (A Taste of the Philippines), and Lawrence Letrero (proprietor of Filipino/Cuban concept Bayan Ko and former executive chef of Sable Kitchen & Bar). Chefs and restaurants visiting from elsewhere in the region and country include Meat on the Street (Milwaukee), Guerrilla Street Food (St. Louis), and Carlo Lamagna of the soon-to-open Magna (Portland, OR). On the international front, Kultura Festival will feature Manila’s own Chef Sharwin Tee (host of Lifestyle TV’s Curiosity Got The Chef) and regional Caviteño specialties from Gene’s Imus Longanisa. With over a dozen food vendors and two exclusive Filipino- inspired beers from Sketchbook Brewing Co., this year’s culinary options will be the most extensive ever. Additional chefs and the full festival menu will be posted soon on the event website. 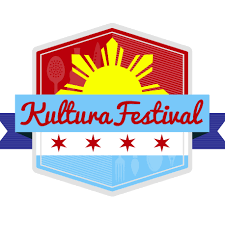 Kultura Festival has traditionally provided a platform for forward-thinking Filipino American musicians and this year is no exception. Bay Area rapper, producer, and spoken word poet Ruby Ibarra will headline the festival, bringing empowered, politically conscious rhymes to the Kultura stage in a rare Chicago appearance. NYC-based “Slaysian” pop singer K Rizz also turns up with heat with her sultry dance tracks, while Windy City emcee Jofred Estilo of the Grammy-nominated production crew Chinza//Fly spits real talk on the mic with a full live band in tow. 5 Magazine bossCZBOOGIE and the multi-talented DJ King Marie will set the tone by paying tribute to Chicago’s legacy both as the birthplace of house music and as a thriving hotbed of hip-hop culture.

In a first for Kultura programming, the public will be invited to exhibit their own talents during the Kultura Cypher Jam, an all styles dance battle featuring a cash prize and judged by a panel of respected veterans of Chicago’s breakdance community. The expanded arts lineup will also include “The Filipino Comedy Hour” sketch revue (featuring improv by Club Asia, Silly Point, and SPITFIRE plus stand-up from Amy Do and Stuti Sharma), a performance from community theater group CIRCA Pintig, and spoken word by Gretchen Carvajal (supported by National Poetry Slam 2018 Chicago team representative Chris Aldana).

Filipino American entrepreneurs will again offer their unique wares for purchase at the festival, including custom tailored Barong Tagalog formal wear from Pineapple Industries, Filipino history-inspired streetwear designed by Bayani Art, and bold statement pieces from the BRWNGRLZ and Reppin accessory lines. A new addition for this year will be the Sari-Sari Store pop-up shop, a handpicked collection of diasporic artwork, apparel, and other items produced by Filipino artisans across North America, such as the Los Angeles-based manufacturer of ancestral personal care products, Herbalaria.

Beyond just a celebration of food and arts, Kultura Festival is also a hub that unites Chicagoans who are passionate about creating positive social change on the local, national, and global levels. As such, space will be given to guests to connect with community partners such as the Alliance of Filipinos for Immigrant Rights and Empowerment (AFIRE), Asian Americans Advancing Justice | Chicago, 826CHI, i2i: Asian Pacific Islander Pride of Chicago, Our Music My Body, and many more.

General admission for Kultura Festival is $15. Seniors receive admission for $10, while students with ID and children under 12 will be admitted for $5. Entry is free for kids age 5 and under. Advance ticket sales and complete festival info are available online at kulturachicago.com.