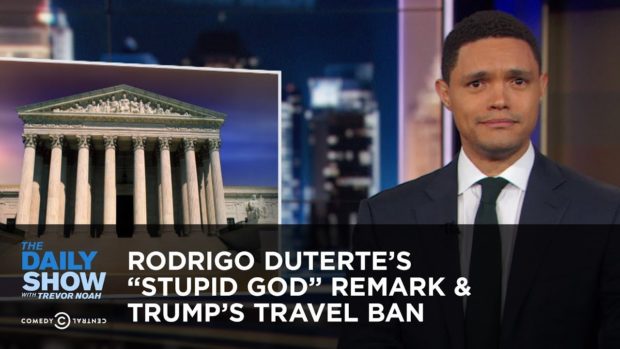 Even high school students of thousands of Catholic schools across the country, let alone the law students of San Beda, are discussing the series of public denials made by President Duterte vis-à-vis the Creation story, Heaven, and Hell.

The President claimed his “God” is different from our God, known as YHWH by the Jews, Allah by our Muslim brethren, or ABBA Father by all Christians (Catholics, Protestants, Born-again Christians).

To believe the President, who once jokingly promoted his own “Iglesia ni Duterte” and called Creator God in the first book of the Bible “stupid” is to reject the “the God of Abraham, Isaac, and Jacob” (Genesis 50:24; Exodus 3:15; Acts 7:32), who is also Our Father Who art in Heaven, the God who “so loved the world that He sent His only Son” (John 3:16).

To follow Duterte and to believe in his pronouncements is to reject the entire Sacred Scriptures, both the Old Testament and the New Testament. To joke about God and to laugh out loud (LOL) is worse.

Today, in a God-mocking administration, I don’t think the Filipino Christian can remain indifferent or mediocre, or stay in the safe and comfortable middle ground.

A lesson from the creation story: To deny that man is god or demigod.

In the creation story (which Duterte mentioned), “God created man in His own image, in the image of God He created him; male and female He created them” (Genesis 1:27, original text in Hebrew).

The Hebrew word Selem (image) implies a physical semblance or an exact copy. Thus, in the previous verse (26), the additional word “likeness” softens the force of the implication of the “imago Dei.”

Ergo, the word “likeness” was added to intentionally mean “similarity but not equality.” The hagiographers (original Bible authors), in adding “likeness” to imago Dei, want to emphasize something more, and that is to deny that man himself is God.

That small addition meant a huge difference. Among Israel’s neighbors in the ancient East, most rulers claimed being deities, gods, or demigods among men, such as the Egyptian pharaoh and the self-proclaimed Persian God-King Xerxes, whose word was everyone’s command, particularly in matters of life and death.

Against this historico-cultural background, the hagiographers intended to put forward the unmistakable story of human origin from the Divine Hands, lest proud men misjudge themselves to be some sort of a deity. And Pope Francis would express it emphatically in his 2015 encyclical Laudato Si: “We are not God!”

From our local media to the Washington Post, from BBC to Aljazeera, the Philippines once again was put on the global radar for infamous talks and startling news. When Russian citizens saw on TV how a “Christian” President taunted and cursed God, even the atheists among them made the “Sign of the Cross” and exclaimed “Jesus-Mary-and-Joseph” (hyperbole mine).

With a solid concentration of atheists, Russia didn’t have much experiences with leaders directly cursing God. They had strongmen like Vladimir Ilyich Lenin (1870-1924), Joseph Stalin (1878-1953), and Nikita Khrushchev (1894-1971), who butchered their own people for political gains; they were godless and fearless but did not curse God Himself.

“My God never created Hell because if he created Hell he must be a stupid God,” Duterte said in his speech in Clark, Pampanga.

A better version was once asked by Freemason and author Mark Twain: “How can the God of love send someone to hell?” (cf. The Mysterious Stranger, 44). However, when Twain asked the quintessential question, quite the opposite of the President, he was reflective and respectful.

Duterte claimed that God assured him that victims of extrajudicial killings will go to Heaven (Bukidnon, August 3, 2018) while he can go to hell, “if such a place indeed exists,” he added.

Mortal men in the hands of the Immortal God

King Xerxes, the Egyptians pharaohs, and all tyrants that existed from the beginning of human history are all gone. In recent history, Lenin, Stalin, Marcos, Mao Zedong, Idi Amin, and the other leaders who ruled like demigods have all been reduced to specks of dust.

After he advanced the idea of “God is dead,” German philosopher Friedrich Wilhelm Nietzsche (1844-1900) suffered from a psychiatric illness, with depression, and ended up with profound dementia and a stroke.

American-Latvian artist Mark Rothko (born in 1903) who said, “I curse God daily because men are born to die,” committed suicide in 1970. Careful if you must, Mr. President, and remember God’s most solemn command: “Thou shalt not take the Name of the Lord Thy God in vain.”