Where are the Filipinos in Harvard discrimination lawsuit? 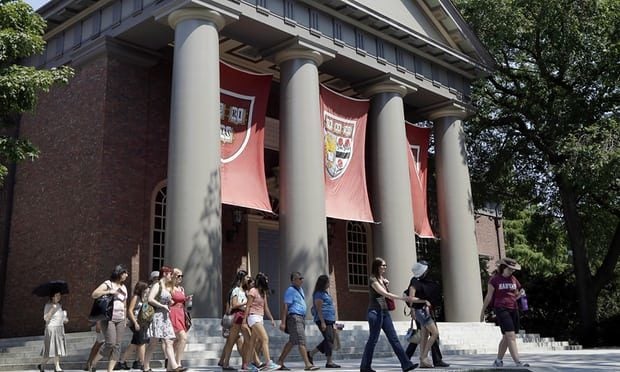 It’s worth mentioning my Harvard experience up front because Harvard is front page news with that lawsuit filed over Asian Americans’ admissions.

But where are the Filipinos?

Let me tell you.

I do a live one man show which touches on my Harvard days in “Amok Monologues: All Pucked Up” (in a special benefit for Manilatown/I-Hotel in San Francisco, one night only at 7:30 pm, Aug. 17).

The lawsuit in the news was filed by white conservative Ed Blum using Asians, mostly Chinese, as proxies to fight alleged discriminatory admissions practices at Harvard. Discovery has revealed a complex and unique admissions process at Harvard. But using race to determine admissions is legal, and the suit doesn’t really justify changing current law.

What has been exposed so far in the case is that even our top institution of higher education has struggled to deal with a very specific diversity issue: the explosive growth in Asian immigration since 1965 resulting in an Asian American population of more than 21 million. Filipinos are about estimated to be about 4 million.

FEATURED STORIES
Shooting kills 2 officers, one a Fil-Am, in Hawaii
What exactly did Vilma Bautista — Imelda’s ex-aide — do?
Ex-aide of Imelda Marcos is New York’s No. 2 tax cheat

Throughout history, Asian Americans have long been one of the most discriminated and misunderstood ethnic groups, starting with the Chinese Exclusion laws in the 1800s, to the subsequent laws that impacted other Asian groups, in particular Japanese, Koreans, and Filipinos.

These groups were kept out by biased immigration laws with ridiculous quota restrictions based on race. It wasn’t until 1965 when the immigration law changed that Asians were finally allowed in greater numbers, around the same time the country was adjusting to the notion of civil rights.

So, it shouldn’t be a surprise that Harvard has had difficulty with how to deal with Asian Americans from the start.

“Asians were an overlooked minority despite a long history of discrimination,” an article in last week’s New York Timesreported.  “As late as 1976, Harvard did not recognize them as a minority group and barred them from a freshman minority orientation banquet.”

I was a freshman in 1973. I don’t remember ever being invited to a Black, Brown, Yellow banquet for Crimson people of color.

In fact, most of the Asians I knew at school were foreign royalty, or from elite Asian families. Not many were Asian Americans like me with a free lunch background and parents who were both on SSI.

I don’t ever remember being referred to as being part of a “minority group.” Maybe if they saw me as Mexican?

The truth is they didn’t see me at all.  And if they did, I was just brown, and not white.

That Times article last week described how Asian Americans were viewed this way:

“They had a kind of neither-nor identity, denied both the solidarity of other students of color and the social standing of white people,” the article said.

Now that was the honest to God truth. Harvard didn’t know how to deal with Asian Americans. Not when I was there.

Retired Dean Henry Rosovsky, mentioned the dilemma over Asians in his 1990  book, “The University: An Owner’s Manual.”

He speaks of “underrepresented ethnic minorities” as “primarily blacks, Hispanics, native Americans, and to a lesser degree Asian Americans.”

Rosovsky said the “search for these students is the equivalent of affirmative action in employment.”

Later in the same chapter, he reiterated the point: “I think few will dispute that blacks, Hispanics, and native Americans—and some Asians—need the most positive reinforcement.”

Rosovsky explained in his footnotes that he separated Asians because Americans of Japanese, Chinese, and Korean descent are the most “overrepresented” groups in higher education.

Since publication, the numbers have risen dramatically just as the Asian American population has exploded.  Harvard currently has a freshman class around 22 percent. Berkeley’s Asian American numbers are around 40 percent.

So, some Asians are clearly doing well, but who are the ones Rosovsky refers to as “some Asians”?

Rosovsky mentioned them by name, when he wrote, “Vietnamese, Cambodians, Laotians, Filipinos, and Indians may need as much assistance as, say, blacks.”

Hmm, at Harvard I had soul brother equivalence.

When I read Rosovksy’s book the first time in 1990, it struck me how the university saw me.

Then again, I realized why I might have felt more comfortable taking courses in the college’s Afro American Studies Department. A creative writing course there was very different from one taught in the English Department. We told different stories.

The upshot is this: If we want to uncover real discrimination at Harvard, we shouldn’t be looking at the overrepresented Asians like the Chinese, Japanese, and Koreans.

If Blum was really looking to help Asian Americans, he’d be looking at those who make up Rosovsky’s “some Asians” list: Vietnamese; Cambodians; Laotians; Indians—and, of course, Filipinos.

Front and center.  Did they get the attention they deserve? Were they served?

That might be useful. But in his fishing expedition for victims, Blum got a handful of Chinese Americans who want to know why their perfect SATs weren’t good enough.

The truth is, Blum doesn’t care about any of them.

He’s not interested in exposing discrimination.  He just wants to preserve the white status quo. It’s the same group of people Trump calls his base, that will do anything to protect white privilege.

Blum couldn’t overturn affirmative action when the white victim he used to make his case failed to produce the result he wanted before the Supreme Court in the Fisher vs. Texas case.

So, he searched for and got Asian victims to act as white proxies. But the examples seem to be all mostly Chinese, among the most overrepresented Asian Americans at Harvard.

He needs Filipinos. But you don’t hear about them. Because they were helped and not discriminated by Harvard.

Blum prefers his Chinese American victims, which doesn’t help him.

It only proves the lawsuit is just another conservative ideologue’s wrongheaded attempt to end affirmative action.

Emil Guillermo is a journalist and commentator. He writes a column for the Inquirer’s North American Bureau. See him perform “Amok Monologues” at SF’s Manilatown, Aug. 17, 7:30 pm.