Filipino doc suspected of aiding ISIS to be extradited to U.S.

Filipino doc suspected of aiding ISIS to be extradited to U.S. 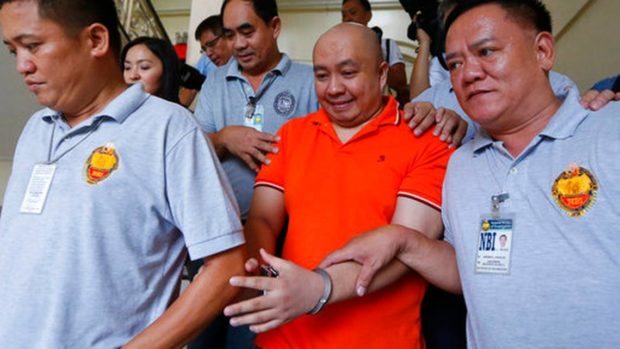 Russell Langi Salic, center, a Filipino doctor accused by U.S. authorities of plotting attacks in New York City, including in concert venues and Times Square, arrives at a trial court for his extradition hearing in Manila, Philippines. A Philippine court on Friday, July 27, 2018, granted a U.S. government request for the extradition of the Filipino doctor suspected by U.S. authorities of being an Islamic State group sympathizer and plotting bombings and shootings at New York City concert venues, subway stations and Times Square. AP PHOTO/Bullit Marquez

A Philippine court has granted a U.S. government request for the extradition of a Filipino doctor suspected by U.S. authorities of being an Islamic State group sympathizer and plotting bombings and shootings at New York City concert venues, subway stations and Times Square.

Presiding Judge Rosalyn Mislos-Loja granted the U.S. request in a July 23 ruling which The Associated Press obtained Friday and ordered Russell Langi Salic to be extradited to the U.S. to face the charges. Salic, who is detained in Manila, has denied the charges, opposed his extradition and can appeal.

In the 33-page decision, Mislos-Loja ordered the seizure and surrender to U.S. authorities of all items, documents and evidence connected with the offenses for which Salic is charged in the U.S., including cellphones, computers and documents.

Last year, U.S. prosecutors said Salic was one of three Islamic State group sympathizers who plotted bombings and shootings in 2016 in New York before U.S. agents thwarted the plot.

Salic was taken into custody in Manila last year. Canadian citizen Abdulrahman El Bahnasawy was arrested in the U.S. in 2016 and has pleaded guilty, and an American of Pakistani origin, Talha Haroon, was arrested in Pakistan in the same year.

Salic is alleged to have sent about $423 from the Philippines in May 2016 to an undercover FBI agent posing as an Islamic extremist to help fund the planned attacks. Salic told the agent he intended to continue sending money in support of the Islamic State group, according to court documents that have been made public in New York.

The documents said Salic, who used the alias Abu Khalid, allegedly told the agent his ultimate goal was to join the Islamic State group in Syria but that “it would be a great pleasure if we can slaughter” people in New York.

Transaction records obtained by the FBI show that in addition to the $423, Salic allegedly made multiple money transfers in 2015 and 2016 in support of the Islamic State group ranging from $180 to $435 to Australia, Lebanon, Malaysia and Palestine. He also sent money twice to Bosnia in April 2016, according to U.S. court documents.

The funds were sent through an international money transfer agency in southern Cagayan de Oro city, the records show. Salic had worked as a doctor in a hospital in Cagayan de Oro.

Salic told reporters after a Manila court hearing last November that U.S. authorities may have mistaken money he sent to a charity as funding for the plots. An FBI agent who posed as a Muslim online was behind the allegations against him, he said.

The U.S. government sent an extradition request in May last year. The Philippine government, through the Department of Justice, filed the request with a Manila court on behalf of the U.S. in September as specified under an extradition treaty.

Aside from the U.S. charges, Salic also faces separate criminal complaints for alleged involvement in the abduction of six sawmill workers, two of whom were later beheaded, in the southern Philippine town of Butig in Lanao del Sur province in 2016, an allegation that he has denied.

Salic, who is detained at the National Bureau of Investigation in Manila, could face either the U.S. or Philippine case first depending on the decision of Filipino authorities, justice department officials said.