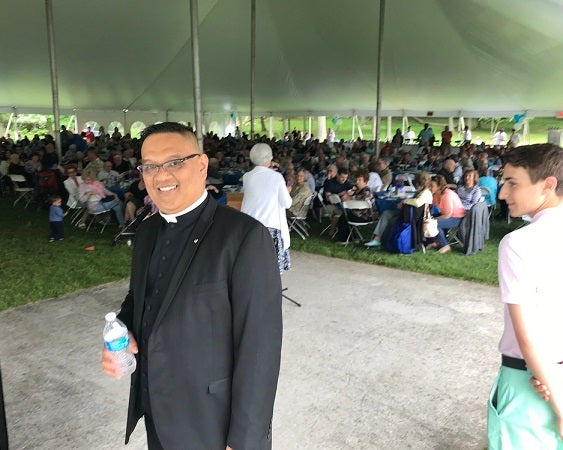 NEW YORK–Inside a huge white tent packed with community members, friends, and family, Father Adolfo Novio bid farewell to his parish in Shrub Oak, a hamlet in Westchester County, New York. It was a cloudy but humid day, and more than 500 people came to see him perhaps for the last time.

Having completed his three-year assignment in New York, Novio will soon join the Kennedy Catholic High School, a private school in Somers, New York, as a faculty member. He will also be the school chaplain as part of his pastoral ministry, moderating the school’s pro-life group and is expected to take part in the recruitment of students. At the same time, he will take courses on School Management and Leadership under Harvard Graduate School of Education.

The devout Catholic boy from Samar has come a long way.

Abandoned by his father at a young age and raised by nuns in an orphanage – his mother was a cook for the Daughters of Charity — Novio came to the U.S. in 2015 to study at the St. Joseph Seminary in Yonkers.

Within months after his arrival in New York City, he was ordained by Cardinal Timothy Dolan in a solemn ceremony held amid the ruckus of renovation work at St. Patrick’s Cathedral. He was one of 12 deacons who answered the call to priesthood. He celebrated his first mass on May 24, 2015 at Our Lady of Pompei Church in Manhattan.

His first assignment was with the Archdiocese of New York. He was named Parochial Vicar of the Saint Elizabeth Seton Parish in Shrub Oak, under the leadership of Pastor Robert Quarato.

“Father Novio met all the challenges of parish life and as you see the people love him very much,” said Quarato. “He was very effective in what he did. In particular, I appreciated his good work with the youth, the young adults and the teenagers.” 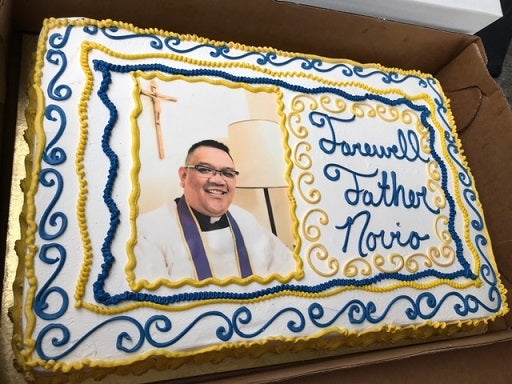 Novio’s rapport with the youth did not go unnoticed. Cardinal Dolan decided to send him to Kennedy Catholic High School for the next few years, which will be his new ministry.

Novio was presented with a plaque of appreciation by the parishioners of St. Elizabeth Ann Seton. “In remembrance of your time with us. In three short years, you have really made yourself a part of this parish” read the message on the plaque.

His popularity with the youth is known throughout the archdiocese. He can be counted on to sing, play the guitar and the piano, and this musical talent is how he is able to connect with teenagers. He is credited with reviving the Youth Ministry of the parish. It has been mentioned that he may have inspired some teens to become priests. 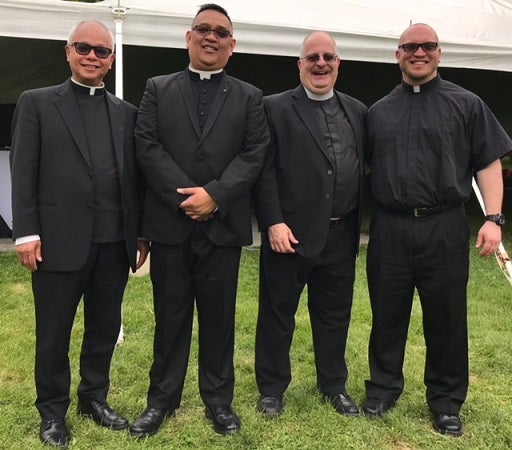 Adam Andreani of the Youth Ministry said, “He has brought the youth group together, taught me how to be a good priest. I’m not saying I’m a priest, but there is a strong possibility, because of Fr. Novio.”

“He is very funny, and tells lots of jokes,” added another teenager who spoke at the gathering.

Novio and Natania Oliverio, the cantor for the parish, sang a rendition of “Alleluia,” which resonated throughout the assembled crowd.

“In our first or second mass together, he just started singing with me (at mass), it was just unbelievable. He just jumped in while I was cantoring and he harmonized with me. I was like this is great. Ever since then, whenever we have a mass together, he tries to harmonize,” recalled Oliverio.

She said Novio has an “amazing voice” and that she was sad to see him move on to another assignment. “But he’s gonna be a great influence on the kids at JFK.”