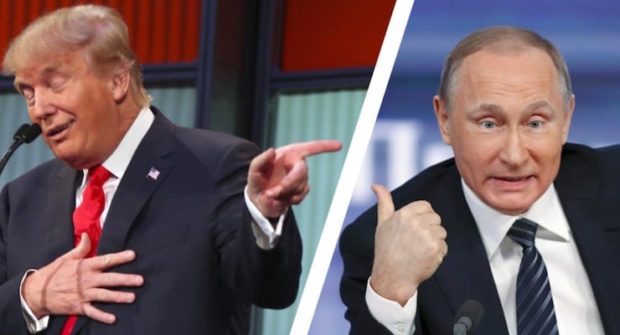 I never thought I’d say this, but let’s just be blunt.

The Philippines may have a president who is actually smarter than the president of the United States.

Considering we are talking about Donald Trump that may not be saying much. But the last few days has exposed the president badly. After that poor summit performance with Putin in Finland, the president has become an international laughing stock.

That’s not the kind of stock you want to see rising.

But it is funny when the most powerful man in the world says he trusts Putin, America’s arch enemy, more than his own intelligence agents. And all while heaping lavish praise in a news conference watched by all the world.

It’s made the president seek out what is known on the golf-course as a mulligan. A do-over, if you will.

But how pathetic is Trump when he tries to explain his own words about whom to trust, Putin or U.S. intelligence agencies.

“They said they think it’s Russia,” Trump said. “I have President Putin; he just said it’s not Russia. I will say this: I don’t see any reason why it would be.”

That’s what he said Monday.

On Tuesday, Trump tried to correct himself. “The sentence should have been, ‘I don’t see any reason why it wouldn’t be Russia,’ sort of a double negative.”

And that’s supposed to, as Trump added, clarify things “pretty good.” (He means “pretty well,” but that’s another grammar error).

The new sentence, “I don’t see any reason why it wouldn’t be Russia,” doesn’t clarify anything.

If he’s doing anything, he’s very softly suggesting a refutation of Putin, but  in a way no one can understand.

What’s lacking in Trump is a declarative verbal strike to correct the matter.

That statement didn’t do it Tuesday.

And on Wednesday, Trump was asked again at a cabinet meeting in Washington if Russia was still targeting the U.S. and Trump said, “No.”

No? It was yet another clear negation of the assessments at the highest level of U.S. intelligence.

Again, the president bungled it. And then two hours later, spokespeople tried to clean up saying he meant “Yes.”

Do you see what trouble democracy’s in when the leader of the free world can’t speak in a declarative sentence that would clearly and definitively show you that you just don’t mess with the U.S.?

We have a confused leader who is only showing his lack of fitness to do his job.

All this of course began at this week’s summit in Hell-stinky, where Trump did nothing more than solidify his bully status.

The way you beat a bully is merely to stand up to him. Even when you’re shorter with less hair like Putin. The Russian president never had to take off his shirt. He never flinched. He knew exactly how to play a trump hand.

Putin stood his ground at that monstrous event we might as well call the birthing of some new two-headed world monster. Because there they were–the two leaders, one supposedly of the free world and the other of the less free.

And there they were both speaking as one. Trumputin.

How could that be? Putin–the man behind the taking of Crimea, the unrest in the Ukraine, innumerable human rights violations, the suppressor of free speech and a free press–he and the president of the free world were one?

At this presser, they were.

Especially on the subject of Russian interference in our 2016 elections.

Putin boldly said (in translation) that Russia “never interfered” in the U.S. election. He referred to it all as the “so-called interference,” conveniently dismissing the indictments issued by the Mueller probe against 12 Russian military hackers.

Instead of a forceful rebuke, or a well-timed diplomatic tongue lash in return, the U.S. president responded meekly. Trump didn’t hold Russia accountable for anything. In a typical Trump move, he went Charlottesville, where he didn’t have the heart to blame white supremacists despite compelling visual evidence.  Remember the many “fine people of both sides” line?

In this case, Trump would only say that “we have both made mistakes,” and how both countries were to blame for the current state of U.S.-Russia relations.

That’s despite being armed with all the intel by U.S. officials that have resulted in indictment after indictment in the Mueller Russia probe.

Trump was merely doing a typical bully move. He had a chance to take a swing. Even sucker punch Putin.

But you don’t throw a sucker punch when you’re the sucker.

Besides, bullies don’t punch. When the moment comes, and it’s swing or be swung upon, they speak softer. Blame both sides and try to be friends with their enemy.

It may work in business when a CEO sells out his workers to save his butt in a failing negotiation. But in a democracy, your allegiance is to the American people.

We’re left betrayed by a leader who doesn’t stand up and defend our interests or democratic values as forcefully and unequivocally as possible.

Mark it historically. It was there for all to see: Trump’s public betrayal of America.

Filipino Americans know how it feels when a president betrays them.

Filipino veterans of World War II went to fight for the U.S. in the Philippines during WWII. They were promised citizenship and full pay and benefits for their efforts if they answered President Franklin Delano Roosevelt’s order. And they signed up in droves. Filipinos were the bulk of the prisoners of war in the Bataan Death March.

For their efforts they got the Rescission Act of 1946, signed by President Truman, which essentially negated the promise of Roosevelt.

Many of these veterans ultimately became American citizens in other ways. So, these Filipinos weren’t just denied all the rights they were promised. Thousands of them continued to fight for their back pay and benefits as Americans.

It took more than 55 years for them to be made whole.

Roosevelt made the promise, but Truman was the bad guy who rescinded the promise in 1946.

Roosevelt is mostly remembered for his classic betrayal of another group of Asian Americans with Executive Order 9066, which led to the incarceration of thousands of Japanese Americans.

We know how it feels to be let down by a president. It cost Asian Americans a lot more than people will ever realize when your leader abandons you.

And now everyone else knows how it feels too.

Can Trump survive this?

Look at all the things he’s survived to date, including pussy grabbing statements on Access Hollywood, sexual harassment claims, and alliances with white supremacists.

Among all Asian Americans, Filipinos are the Trumpiest, big time supporters who at every negative stay loyal.

The only thing I can think of is that these Filipinos, many of them well educated professionals and doctors, like the idea that a sitting U.S. president  is simply not as smart as most of the well-off Filipino immigrants who support him.

I can hear them saying, “That’s our dummy. We voted for him. We can control him. Just like Putin!”

The summit proves Trumputin shouldn’t be anyone’s idea of some new world order.

And so we are in a new phase in the Trump era of U.S. democracy.

Time for all good patriots on all sides to speak up and defend America–from its president.

As time goes on, Trump tries to undo what he’s done, but he only seems to make things worse.

The summit exposed Trump for all the world to see. It’s not a modern update of “the emperor has no clothes.”

The Trump story is sadder. The emperor has no clue.

Emil Guillermo is the veteran journalist who covered politics and Washington, D.C. from 1989-1994. He writes a column for the Inquirer’s North American Bureau.  Find  him on Apple Podcasts. Twitter @emilamok