‘The best President Russia has ever had’ 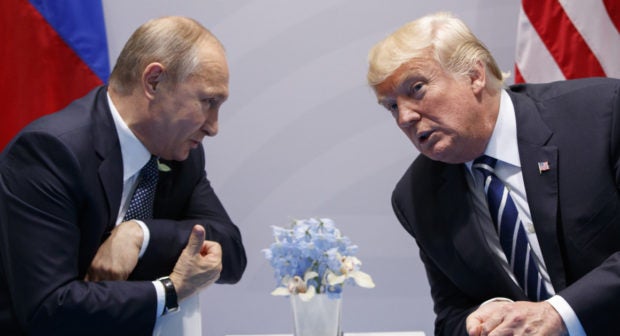 NEW YORK — As dubbed by Michael Avenatti, Stormy Daniels’ lawyer, Don the Con has been his usual deluded blustery self in Europe. No doubt he will convince himself, if he hasn’t already, that the thousands of people who have taken to the streets to protest in no uncertain (and certainly unflattering) terms his visit to the UK are in reality fervently expressing their unstinting support for him and his agenda.

Don the Con has so severed his connection with the real world that he doesn’t have to think twice about conning himself. It might be that all those years as a star of reality television, an oxymoron if ever there was one, caused his arrested development. Or perhaps exacerbated it, given that this con man from Queens, had his development arrested long before then.

Which is why that gigantic 19-foot Trump Baby balloon, also dubbed the “Orange Toddler,” diapered and with smartphone in hand, floating over the streets of London, was the perfect embodiment of the Whiner-in-Chief, floating as it does on hot air.

What might have Don the Con thought of the balloon? A sign of cheeky affection, if not clever homage? With the planet become his reality show, and as its self-proclaimed center, he can say a lá Louis XIV, that Le monde, c’est moi!

That criticism of the British Prime Minister Theresa May, voiced publicly? What criticism? What else could it be but the press peddling fake news!

In the meantime, the Mueller probe continues to draw closer to him. The Department of Justice indicted 12 Russian military officers, working for the Russian Federation, for

hacking and interfering in the 2016 election—on which Don the Con had been briefed before the indictments were announced at a press conference by the Department of Justice’s Rod Rosenstein. That was followed the day after by the arrest of Maria Butina, a Russian and gun rights activist, who has been charged with acting as an agent for the Russian Federation to cultivate ties with conservative U.S. politicians and establish ties with the NRA.

Don the Con said he would bring up the matter of interference in the 2016 presidential elections at his Helsinki meeting with Vladimir Putin. He did, and to no one’s surprise, but to everyone’s dismay, except perhaps his most blindly loyal followers, Don the Con took Vlad the Impaler’s word that his government was completely innocent—he was shocked, shocked!—of the charges leveled by U.S. intelligence agencies. Don the Con said that Putin “was extremely strong and powerful in his denial.”

This is the equivalent of asking Ferdinand Marcos if he stole billions while in office and accepting, with nary a word of protest, his wounded, what, me? Or politely inquiring of a Mafia don like Al Capone or John Gotti if he did indeed run criminal enterprises and murder those who stood in the way. Naturally crime bosses would have you believe they are as pure as winter’s first snowfall.

At one point, Trump was asked pointblank whom he believed, Putin or his own intelligence agencies. Defending Putin, Don the Con said, “I will say this. I do not see any reason why it would be.” He all but declared, I am with Putin here. This, from the man charged with protecting the U.S. Constitution and the democratic process, kowtowing to a veteran ex-KGB  operative without the slightest interest in democracy, in human rights, and bent on sowing internal divisions within the U.S. political system.

(Just to be clear and by no stretch of the imagination is this meant to justify Russia’s underhanded tactics, but there is some poetic justice in all of this, as the United States has so often interfered in the elections of other nations, the Philippines being one.)

As one experienced intel officer put it, the press conference was in effect one between a spy and his handler. What exactly does Vlad have on Don?

If this isn’t treason, what is? We know that Don the Con absolutely has no shame. What about those who continue to support him and are thus complicit in this betrayal? Do they too have no shame?