SAN FRANCISCO — Protesters held a rally in front of the Chinese Consulate before proceeding to the Philippine Consulate downtown, demanding that China “get out of Philippine territory in the West Philippine Sea.” The protest was timed with others in Los Angeles and Vancouver on the second anniversary of the UN’s Permanent Court of Arbitration ruling that China had no right to the territory it was claiming.

Filipino American Human Rights Advocates (FAHRA) in a statement celebrated the court’s finding that “China’s historical claim of the “nine-dash line” [is] illegal and without basis.”

“China continues to violate the UN’s decision with the backing of its puppet Philippine government headed by President Duterte, who is deceived by the ‘build, build, build’ economic push while China establishes a ‘steal, steal, steal’ approach to islands and territories belonging to the Exclusive Economic Zone (EEZ) of the Philippines as determined by UN,” the statement lamented. 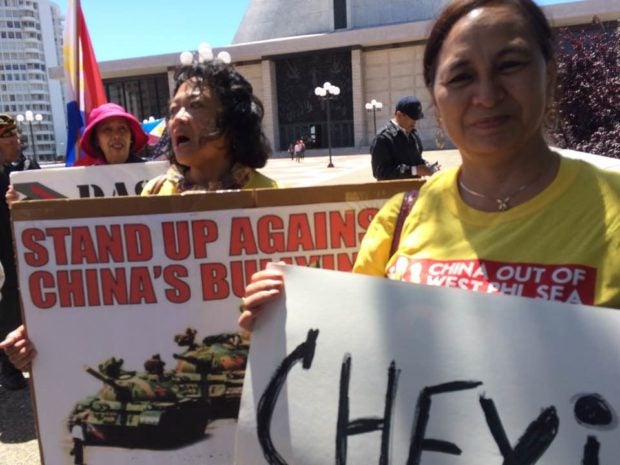 Some of the protesters at the Chinese Consulate in San Francisco. FACEBOOK

FAHRA also found it unacceptable that Filipino fishermen must now ask permission to fish in the Philippine waters from “a Chinese master.”

“Duterte is beholden to the $15-billion loan with monstrous interest rate and China’s investments in Boracay and Marawi, at the expense of Philippine sovereignty,” FAHRA claimed. “This is not to mention that China remains to be the premier supplier of illegal drugs to the country through traders that include the son, Paolo Duterte, with his P6 billion shabu shipment to Davao,” it further charged.

The group demanded that “China abide by the UN International Tribunal Court’s decision two years ago, to honor the full sovereignty of the Philippines over all territories at the Exclusive Economic Zone (EEZ) including the West Philippine Sea and the dismantling of the nuclear missiles and all military facilities installed by the Chinese government at the Spratly islands meant to coerce the Filipinos and all peace-loving people of Southeast Asia who clamor for equal respect and equal sovereignty in the area” among others.

“We demand that they demilitarize the West Philippine Sea (WPS), remove their armed garrison and return the islands to the Philippines now! We never want war. We never desired one. But we have the God-given right to resist evil. As Filipinos and global citizens, we will fight to the end to defend the honor and sovereignty of our motherland. It is our patriotic duty to defend democracy and the rights of nations against colonial powers.” FAHRA’s statement reiterated. 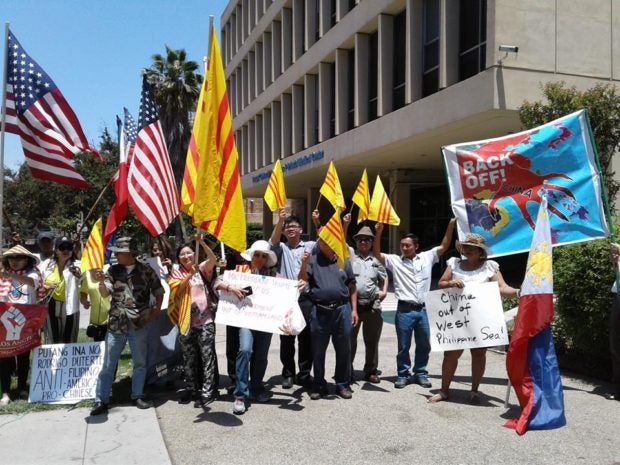 Filipinos and Vietnamese protest together at the Los Angeles Chinese consulate. FACEBOOK

Donny de Leon, a rally organizer, expressed indignation that China continued to bully Filipino fishermen, militarize the West Philippine Sea, and intrude on the sovereignty of the Philippines.

In an interview, FAHRA organizer Ago Pedalizo said the previous Aquino government’s victory in the UN court on July 12, 206 was virtually another Independence Day that Filipinos must celebrate. 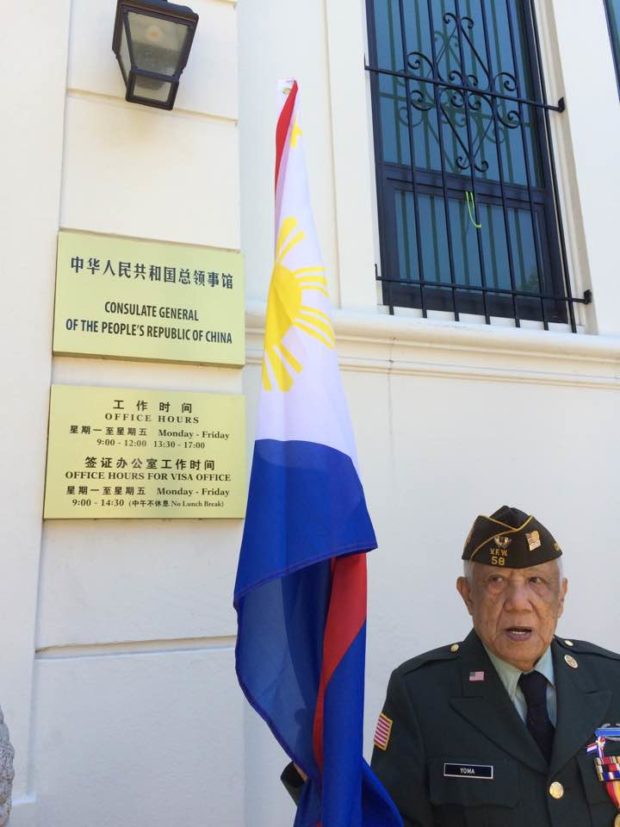 A Filipino WWII veteran at the Chinese consulate protest in San Francisco. FACEBOOK

“Duterte’s government pursues the ‘sell, sell, sell’ approach to sovereignty as a trade-off to all kickbacks he’ll get from the ‘build, build, build’ economic push of China. Nevertheless, the anti-China’s WPS is gaining momentum among the Filipinos that even Diehard Duterte supporters (DDS) and Marcos loyalists find the issue indefensible. Either fanatics are quiet but some have realized they have been duped by a puppet president whose loyalty belongs to a foreigner/colonizer,” Pedalizo asserted. “The powerful naval forces of US, French, UK, Australia and Japan are actually the ones implementing that UN decision on the United Nations Convention on the Law of the Sea (UNCLOS) by pushing the freedom of navigation at the WPS.”

Pedalizo insisted that the biggest obstruction to justice was the “mendicant” Duterte government, “a clear vassal government to a colonizer that bribes through loans that will be paid for by future generations long after Duterte is gone.”

Pedalizo explained other options available to the Philippines that include filing another protest at the UN Court for China to oblige by the court’s ruling, pushing for a U.S. Congress bill to destroy missiles at Spratly islands that coerce small nations, and “building a global movement to publicly shame China and expose its connivance with a tyrant and murderer Philippine president,” and isolating China at all levels.