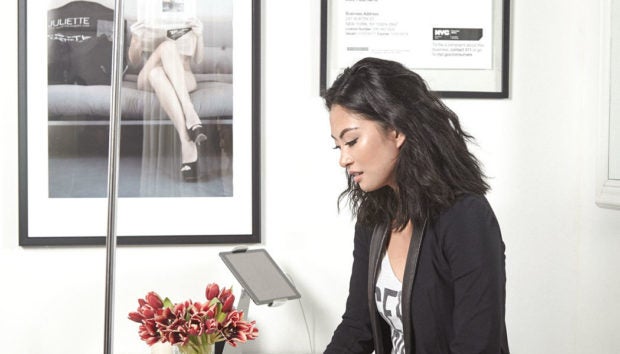 NEW YORK — In New York City, it is a luxury to have your own washer and dryer in your unit, or even in your building. Some residents stuff their dirty laundry into a suitcase and go to a laundromat or use a store front cleaner nearby.

Rechelle Balanzat struggled with her laundry needs and got frustrated by the service she was getting from her neighborhood cleaners. This led her to think: there must be a better way.

That was in 2012. Balanzat used her frustrations and made notes as to how idoing laundry in the city could be better. She saw a vacuum and felt she could fill it up.

“I saw the opportunity there, that a lot of the cleaners were lacking something,” she recalled. “I was actually solving my own problem. I was unhappy with the cleaners in my neighborhood, the way they cleaned my clothes and the way they dealt with us, the customers.”

Because of her background in marketing, branding, and customer service, she saw it an easy fit to bring her expertise to the industry.

“The business is already saturated. Just look around Manhattan,” she said.
Indeed. Walk three to four blocks and you’ll see cleaners, more if you are in mostly residential areas.

But saturation per se is not bad.

“It just means that there’s no shortness of dirty clothes,” Balanzat said.

Last April, after toiling hard, she finally opened a brick and mortar laundry facility in the Upper East Side for her company, Juliette.

Using a smart phone, clients can request Juliette for a pickup. Then her staff will clean their clothes and we deliver them back to them the following morning.

“Juliette is my alter ego,” she explained. “I wanted to give a sense of someone who is there cleaning your clothes, someone real. The idea is about Juliette watching over and taking care of your clothes.”

Opening her UES home is a real game changer for her business. Prior to this, she was renting out space in an existing plant, which posed some challenges for her. The new store gives her control as far as service and quality are concerned.

It took two years of endless phone calls and emails to laundry facilities and cleaners, asking them if they were selling or if would they sell to her. She also visited cleaners across the city and, one day, she got lucky with the space she has now since the previous owner was already looking for a way out and retire.

Now, her business is more than just app-based, it has encouraged foot traffic for residents of nearby buildings who do not need to get onto the waiting list for Juliette invites.

The Juliette App is by invitation only, but one can request for an invite through its website. For now, Juliette covers Manhattan, from the Financial District to 110th Street, and prospective subscribers have to live in a 24-hour doorman building because they pick up and deliver throughout the night.

Juliette started with seed money “just shy of $200,000,” which Balanzat raised on her own.

“It was not given to me in one lump sum, it was a lot of pretty much begging and asking and knocking on so many doors. You start off with your family, then you go to your friends, then business associates. At the end of the day, it is a hustle,” she shared.

Along the way, she encountered a lot of people who said no to her.

“You shouldn’t lose your fire when someone says no to you,” she said. “Everything happens for a reason and to all the people who said no to me, I am happy that they did because I probably would have taken a turn somewhere else and I wouldn’t be where I am today.”

Challenges as a woman entrepreneur

Our conversation with Balanzat shifted to the challenges and struggles she faced as a woman entrepreneur in New York City.

“Part of the challenge being a female entrepreneur looking for funding is, as we see in the current landscape right now, a lot of men in powerful positions would use that as an opportunity to take you out to cocktails or dinner.

“That is when you enter the gray area and, as a female looking for capital, it is very alluring because you want that capital. But then, where do you draw the line. I am trying to earn his trust, I want to show him that I am easy to get along with, but I want this to be strictly business.

“Regardless of what’s going on right now, this is a struggle that many women would always have to deal with because unfortunately, that is the way it is,” she said.

“It brings me to tears when I think about it, when they say, ‘Rechelle, all you have to do is go out on a date with him and he’ll write you a check.’ Someone said that to me and I really had to think about it. Then they followed it up with, ‘You don’t have to do anything you don’t want to do’ and I thought to myself, ‘What? Am I a high-end prostitute? What is going on?’ I am looking [to] fund my company, a working company. That really brought me to tears,” she said.

“Best way to deal with it? You smile and you say no and try not to cause a scene because the world is very small and word gets around fast and unfortunately if you cause a scene, it works against you. You still want to maintain your professional demeanor and politely decline,” she said.

Entrepreneurs say that the first couple of years of a new business can be characterized by lack of sleep, a lot of debt, minor depression, a lot of not knowing which way to turn, which way to go.

Balanzat said she went through all of that and more.

“Sometimes it is a very lonely journey when you are trying to pursue a dream or a vision that only you yourself can see and no one else seems to understand. It gets to you,” she said.

One of her lows happened early on, when she lost her initial staff.

That was the point when she was doing practically everything, from the pick-up of the dirty laundry to the physical cleaning to folding to delivery of the clothes.

“When I was at that low point, the one that hurt the most was seeing my mother, because no mom would want to see their child struggle, and it was a difficult conversation that I had with her where I had to explain that I believed in what I was doing and she just had to accept it,” she recalled.

“That was hard, but I persisted,” she said. “I believed in my dream, and I believed in myself and I knew that if I kept on trying, I knew someone was going to open the door.

Mathematically, someone had to open it eventually, right?”

Nowadays, Balanzat says she can breathe, relax a little, and sleep through the night, confident that she has a physical space, a team and staff that support her.

Owning her space now has further emboldened this young entrepreneur to continue disrupting the laundry industry.