To our Filipino bishops: ‘Thanks for being our guides’ 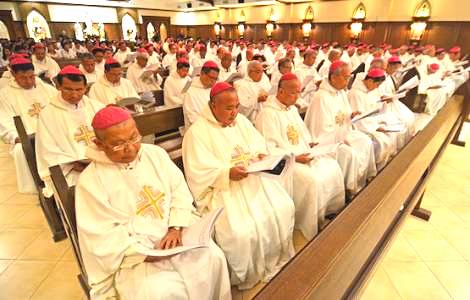 Edifying, enriching, uplifting. I tell you, I am lucky to have known some of our Filipino bishops up close (and personal) and seen for myself how they live the life of Jesus.

Unassuming. Washing and mending their own clothes, dutiful to the Holy Father, dauntless in defending our Mother Church, and “smelling like sheep.” Prayerful and wise. Above all, they so love Father God that I could almost touch faith.

In the Catholic hierarchy, only the bishop has the fullness of the Holy Priesthood. Is this something plucked out of thin air? Or something accidental? Not a chance.

That your parish priest’s authority is a delegated one is intentional on the part of Jesus Christ. That’s why our priests, deacons, and consecrated persons are dependent upon their episkopos in the exercise of the sacred functions (Second Vatican Council, Presbyterorum Ordinis, 7).

Because theirs is a delegated authority, parish priests and other religious clergy have to obey and respect their bishop. Your parish priest cannot just ignore that, at the rite of ordination, he made a solemn pledge of obedience to his bishop who asked: “Do you promise obedience to me and to my successor?”

Successors of the Apostles

Since the Sacrament of Holy Orders maintains the authentic continuity of the Twelve Apostles’ own ministry, our Church is called Apostolic. One, holy, Catholic, and Apostolic Church.

For the curious and the doubtful, it’s best that you check the recorded historical succession of every bishop, for in those records you discover how each one of them today has been validly ordained by a successor of one original Apostle of Jesus Christ (cf. Ireneaus. Against Heresies: Book III, Chap. 3).

No other institution on Earth can claim such authenticated historical succession. Guaranteed to operate for two thousand years and beyond, the apostolic succession is a fundamental building the block of the Catholic tradition (Francis, Homily, Priestly Ordinations, 21 April 2013).

It has been recorded, well preserved, and archived. Let’s take a second look at St. Irenaeus of Lyons, who testified that when Peter and Paul moved out of Jerusalem they became the founders of the Church of Rome.

From Rome to Syria to Manila

As Bishop of Rome, Peter was first, followed by Linus, who was succeeded by Cletus, Clement (AD 30–100), Evaristus, Alexander I, Sixtus I, Telesphorus, Hyginus, Pius I, and so on.

In Syria, the second Bishop of Antioch, was a disciple of John the Apostle, who was consecrated a bishop around the year 69 by Peter, the first Pope, as testified by Ignatius of Antioch in his Epistle to the Philadelphians (written around AD 110).

They belong to the most recent appendage in the long list of successors of Fray Domingo de Salazar, OP, the first-ever appointed bishop of Manila in 1578.

Every priest (like Fr. Robert “running priest” Reyes), religious (like the Benedictine Abbot of San Beda), and the laity must be united with the hierarchy, with the Roman Pontiff, with his local bishop, in humble obedience, and always in humble obedience.

It’s the only way a clergy can be dead sure he’s doing God’s will and not his own, that he is part of the apostolic succession and not apart from it.

Therefore, in addressing Christians as early as the first century, St. Ignatius of Antioch (35-107 AD) admonished all believers with a sense of guarantee:

“Where the bishop is, there let the people gather; just as wherever Jesus Christ is, there is the Catholic Church” (Epistle to the Smyrnaeans).

For two thousand years, the Church’s hierarchical structure and operations have been challenged again and again, but no powers of hell, much less any Vatileaks report, or shaming as “hypocrites,” or sex scandals ever prevailed. All these centuries the one, holy, Catholic, and Apostolic Church functions just the way it is, as intended by Jesus Christ.

A little formula to remember: Loving our priests and bishops = loving our Mother Church = loving Jesus!

Jose Mario Bautista Maximiano is the author of Pope Francis, the Catholic Bishop, and the Priest (2015 Catholic Mass Media Awards “Best Book in Theology”). Comments to [email protected] or twitter.com/DrMaximiano