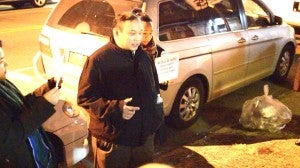 At the town hall at the Philippine Community Center here, Atty. Cristina Godinez of the the Migrant Center at the Church of St. Francis of Assisi criticized President Donald Trump’s controversial executive orders.

“The two EOs are just the beginning. They are un-American not just because they go against the proud history of the US as a nation of immigrants. These EOs pose a national security risk because they drive the undocumented deeper into the shadows. Non-citizens who had or will have any encounter with law enforcement–no matter how minor–are at risk,” warned Godinez.

“The EOs’ language is so broad that this Trump dragnet will potentially capture TNTs, those who are here as tourists, students or temporary workers, and even green card holders most of whom are peaceful, productive members of our communities,” added Godinez.

Nick Cordero, chairperson of Migrante New Jersey, said, “We call on the Filipino community to come together, take a stand and link arms with other vulnerable communities to fight against what we believe is a rising fascist state.”

Maricar Taino, president of the Philippine-American New Jersey Jaycees, told the audience, “It is important when we, as a community with leaders and fellow Filipinos, come closer together, unified, informed, engaged, and equip and support one another for sustainable solutions.”

Godinez further warned: “The chilling effect on the Filipino American community will be palpable because among those who will be affected will be someone’s parent, child, spouse, friend or neighbor. We need to prepare and strengthen our local communities now.” ended.
The meeting broke out into discussion groups to brainstorm concrete actions that the Filipino community can take, before moving to a candlelight vigil in solidarity with those affected by the temporary ban on refugees and immigrants from the seven countries covered by Trump’s executive order. 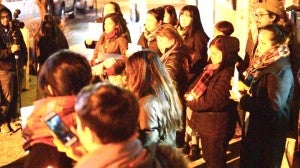 Jersey City Council President Rolando Lavarro also gave a message to the told the vigil: “As he did on the campaign, Trump continues to appeal to the worst in us, sowing fear and divisiveness.  Trump’s executive orders unfairly target Muslims, and are an affront to Jersey City and our incredibly diverse community. We will resist and fight the hatred bigotry coming out of DC. We will stand with and protect our immigrant family in Jersey City and throughout the nation.”

Ruthie Arroyo, chair of Anakbayan New Jersey concluded the vigil with a challenge to Filipino youth to get involved. “Filipino youth must be critical and play close attention to the Trump administration that is spearheading aggressive cuts to funding and access to education, our healthcare system, all while military spending to wage wars abroad will sharply increase.”