Viajeros spokesperson Maria Pureza Escaño believes that true art “does not hate but loves, uplifts not destroys, does not shame the spirit but exalts it and most importantly is not self-serving.” INQUIRER/Jun Nucum

Dubbed as Unang Handog, some of the 17 current members of the Viajeros Filipino Artist Collective attended the grand opening to highlight the excellence of the Filipino artist.

Explaining their Manifesto, Viajeros spokesperson Maria Pureza Escaño—winner of the 2017 International Arts in Berlin competition for sculpture—described their first exhibit as a milestone that offers “actual cases of Filipino excellence in different styles and persuasions.”

“We have artists coming from different walks of life, so you can regard Viajeros as a melting pot of Filipino art. Most of us have the goal of traveling and showing to the world our Filipino soul and culture, to bring about the raising of Filipino pride and morale,” Escaño explained.

“It is sad that many of Filipinos still think that whatever we have is second-rate. Most Filipinos still have that Indio mentality (thinking and acting as a second-class citizens),” she added. She attributed this to the fact that Filipinos were colonized for three hundred years, that we still maintain that indio mentality.

“Most Filipinos do not know that that time and again we have managed to bring home the first prize, the first place, the grand prize not only in arts but in other fields as well.” 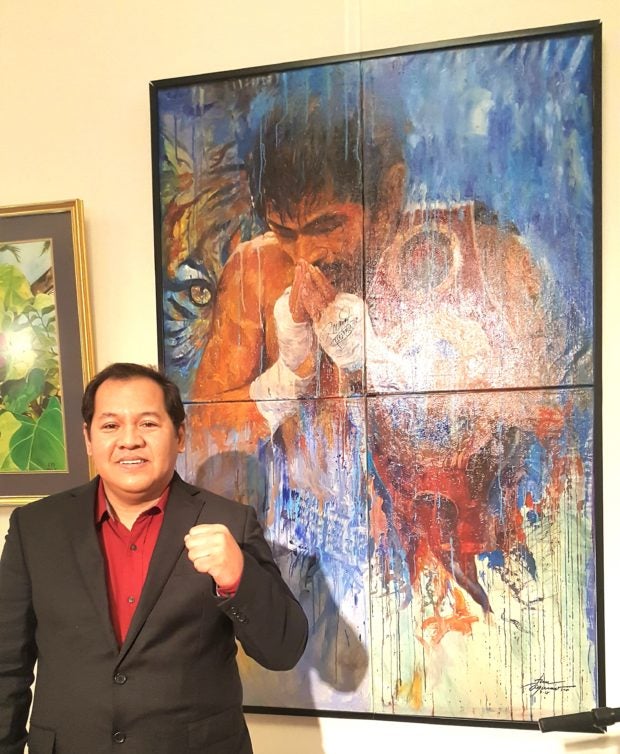 Jun Aquino brought his Heart of a Champion piece, depicting Senator Manny Pacquiao, that would be auctioned off in Malaysia in the middle of July 2018 for the Pacquiao Foundation. INQUIRER/Jun Nucum

Escaño brought her masterpiece Two in Lemuria painting of two colorful peacocks, which she finished just recently and took her three weeks to work on.

“With this art piece, I would like to inspire peace and tranquility because birds, especially peacocks, would not go to a place where there is chaos,” said Esccaño of her painting, which was sold for at least $10,000 even before the exhibit opened

Viajeros founding member Emil Bauto de Leon shared that the current members come from New York, Los Angeles, Texas, California, and the Philippines, but only ten made it to San Francisco. The artworks on exhibit number at least 40. 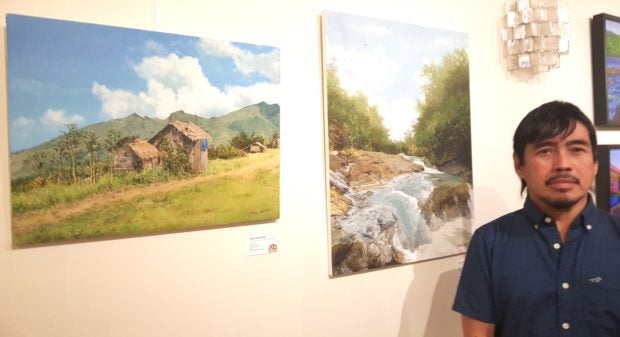 Viajeros founding member Emil Bauto de Leon is very appreciative of the support given by the Consulate in hosting their inaugural exhibit. INQUIRER/Jun Nucum

“Sale of the art pieces depends on the individual artists. After this grand launch in San Francisco, we have scheduled exhibits in Dusit and Solaire in the Philippines and also intend to have one in Texas, New York and in Canada,” added de Leon.

“We had our challenges in Viajeros, including getting together very talented artists (that is why it took us three years to form the group), looking for venues and the promotion of the inaugural exhibit, among others,” de Leon explained. The support given by the Consulate is something invaluable that we really appreciate. They welcomed us with open arms.”

Consul-General Henry Bensurto Jr. confirmed that the group’s objectives are very much aligned with what the consulate’s “spark, connect and empowerment mission.”

A surprise guest for the launch was Assistant Secretary for Social Media of Presidential Communications Operations Office Esther Margaux “Mocha” Uson, who came from New York City where she was invited by Foreign Affairs Secretary Alan Cayetano to a command conference of Philippine heads of posts in the U.S.

“I came here to support the Viajeros. We need to expose our artists and their works here in San Francisco and other parts of the United States and world as well. As they say, this would just be the start of their entry to the international scene,” Uson stated. 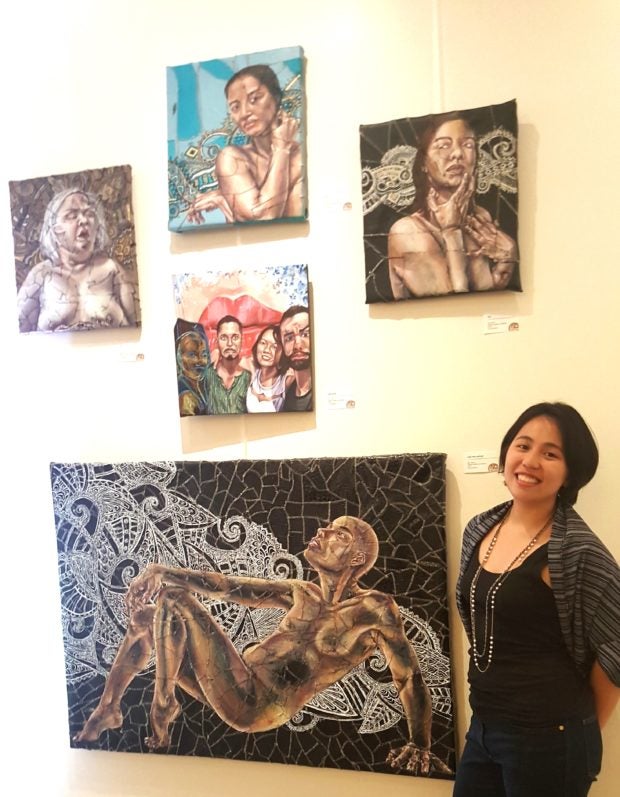 Pro-environment Ina Jardiolin has her canvas made from leather footwear scraps from Marikina, the shoe capital of the Philippines, stitched together for paintings. INQUIRER/Jun Nucum

Aquino, who brought his Heart of a Champion piece depicting legendary Filipino world boxing champion and now Senator Manny Pacquiao, divulged that the same art piece would be auctioned off in Malaysia after an exhibit there in mid-July; proceeds would go to the Pacquiao Foundation. 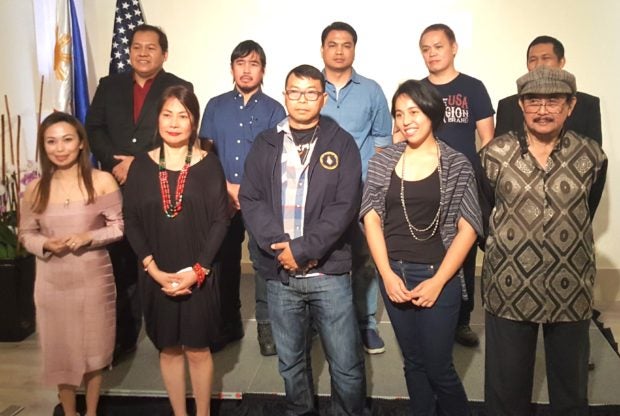 Some of the members of Viajeros group brought to San Francisco at least 40 of their art works to launch their exhibit Unang Handog. INQUIRER/Jun Nucum

“Senator Pacquiao already saw this and asked me how much I will sell it. I answered that since the smaller ones fetch $20,000 each, so this easily would be for $80,000. He then advised me to make it $100,000 that can even go higher in the auction,” Aquino chuckled.

Pro-environment Jardiolin has her family roots in Marikina, the shoe capital of the Philippines, and has her canvas made from leather footwear scraps stitched together for paintings.

“Utilizing the shoe scraps is my way of reducing the amount of garbage thrown and wasted. It usually takes me a month to finish the painting from a canvas that took a week to stitch together. The subjects of my paintings are dancers because I really like how versatile the human body is. I also depict people who have a lot of personality.”

Members of the Filipino community and guests who are mostly art enthusiasts lend their much-needed moral support for the Viajeros inaugural exhibit. INQUIRER/Jun Nucum