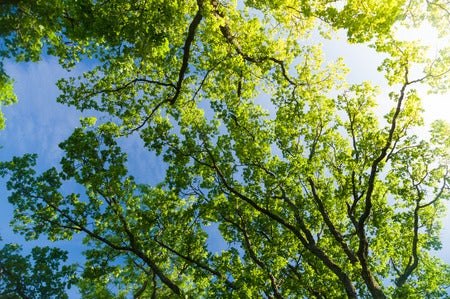 One man and his dog from Kansas City, Missouri had a rather absurd brush with death, after a branch from his garden’s oak tree nearly fell on him.

Sawyer Beslow shared footage of the accident on his Facebook page on Saturday, June 30. In the video, it can be seen that a part of the tree fell off and almost hit him. His dog Milo, looking up at the branches earlier on as faint sounds of the snapping could be heard, got out of harm’s way. Beslow’s wife ran out to see what had happened; though unseen, he could be heard assuring her he was fine.

Beslow said he was checking his planters when the oak tree, which he said is 100 years old, “tried to kill” him. “We are all okay, just a little shook up,” he said. He also reminded everyone to get their trees checked by an arborist.

“I heard the noise from above, the tree cracking, and I looked up and saw the branch breaking off,” Beslow told local media Fox 4 Kansas City.

Beslow said he threw himself on to the garage and covered his head, and that he was lucky that the bulk of the tree branch landed on the other side of the yard.

“The branches on the end came down and hit me on the top of my arm and scraped up my back, but it was the end of the branch, rather than the trunk portion of the branch,” he added.

Beslow also noted that the branch breaking off made such a loud noise, alarming next-door neighbors who went out to check on them.

And while consulting an arborist might again cost him, especially after he just had his tree trimmed six months ago, Beslow already made up his mind: “I think getting it cleaned up and getting certain branches cut off and making sure the trees are healthy is always good.” Katrina Hallare/JB