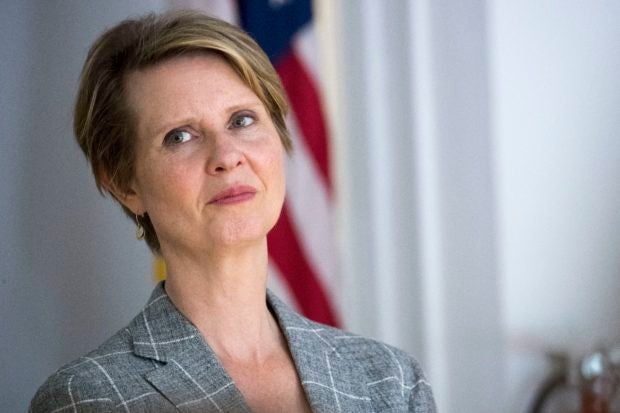 In this June 13, 2018 file photo, Democratic candidate for governor Cynthia Nixon looks at the crowd as she introduced during a campaign event at Borough of Manhattan Community College in New York. Image: AP Photo/Mary Altaffer, File 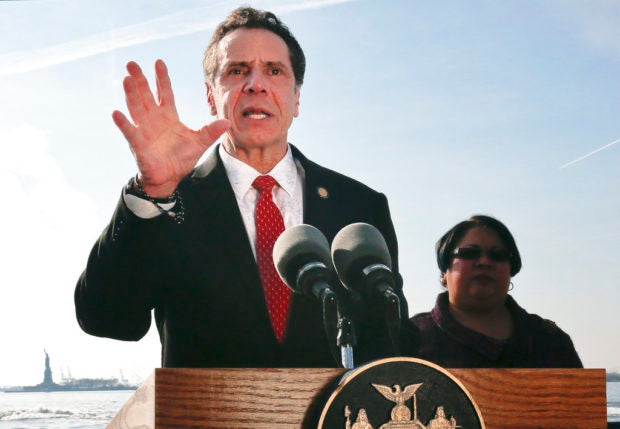 FILE – In this Jan. 21, 2018 file photo, New York Gov. Andrew Cuomo speaks during a news conference in New York, with the Statue of Liberty behind him. Image: AP Photo/Bebeto Matthews, FIle

Her campaign reported a modest uptick in donations — some $15,000 — in the hours following Tuesday’s primary.

“I think that the election of Donald Trump was a real game changer and I think we can throw out the old playbook,” Nixon said Wednesday. “In the last 24 hours, we’ve received hundreds of donations. I think people were really energized by Alexandria’s victory last night and really excited about the prospect of our campaign and our campaign winning.”

Nixon and Ocasio-Cortez have endorsed each other and share many views, including single-payer health care for all, greater investments in education, criminal justice reforms and the abolishment of the U.S. Immigrations and Customs Enforcement agency.

“The community is ready for a movement of economic and social justice,” Ocasio-Cortez said of her surprise victory. She faces Republican Anthony Pappas in November.

Cuomo and his allies, however, say there’s no comparison between a contest for governor and a low-turnout primary in a Congressional district representing Queens and the Bronx. They point out that black and Latino voters make up a majority in the district; Oscasio-Cortez is Latina while Crowley is white.

“This was a minority community largely in this district that is afraid, that is angry, that Ms. Ocasio-Cortez did a very good job connecting with,” Cuomo told reporters the day after the primary. He said the two races were “apples and oranges.”

There are other differences. Crowley skipped two debates with Ocasio-Cortez, fueling criticism that he was an out-of-touch insider. Cuomo’s campaign has aggressively taken on Nixon, portraying her as an inexperienced celebrity, while the governor has moved further to the left, tracking his opponent’s stances on loosening marijuana restrictions, eliminating cash bail and addressing chronic problems in New York City public housing.

And while Tuesday’s primary attracted just 12 percent of registered Democrats, the statewide primary is likely to attract more voters from all corners of the state — and all wings of the Democratic Party.

Christina Greer, a political scientist at Fordham University, said Ocasio-Cortez’s win is the latest twist in the ongoing conflict within the Democratic Party that was highlighted by the bruising presidential primary matchup between Hillary Clinton and Bernie Sanders, who, like Ocasio-Cortez has identified as a democratic socialist. The Nixon-Cuomo contest involves many of the same undercurrents, she said.

“Cuomo says there’s nothing to see here, but that’s part of the problem,” she said. “I think there is something to see here. This race is indicative of the division that we saw in 2016 that’s now become a real chasm.”

Greer noted the big differences between Ocasio-Cortez’s race and the gubernatorial primary and said Cuomo’s move to the left shows he recognizes the risk of a liberal insurgency, even if he won’t admit it.

“I think he does understand the winds are changing, and he is moving with the wind,” she said.

Polls indicate that Cuomo has a comfortable lead over Nixon. He also enjoys a big financial advantage, with more than $30 million in his campaign account compared to just $1.1 million raised by Nixon.

Other candidates in the race include Republican Marc Molinaro, the Dutchess County executive, and former Syracuse Mayor Stephanie Miner, who is running as an independent. NVG

Actress Cynthia Nixon says son has come out as transgender