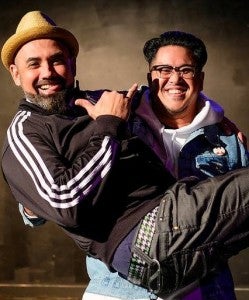 Juan Berumen and Jonah Pavon play boyfriends in “IDWYT (I Don’t Want You To).” PACIANO TRIUNFO

SAN FRANCISCO – Filipino American theater group Bindlestiff Studio will stage a collection of original short plays about love, at its theater on 6th Street from Feb. 9 to 25.

The production will be mounted as a variety show mixing comedy and drama while aiming to capture the complexities of “love, heartache, and the weirdness in between.”

Producers Melanie Elvena and Laura Priscilla Paule explain that this year’s theme, “Time After Time,” spotlights melodrama throughout the ages.

Both grew up watching the Filipino drama anthology “Maalaala Mo Kaya” with their grandmothers.

“It’s a TV show that takes real-life stories and totally sensationalizes them,” says Paule. “But they’re so compelling and relatable…you realize that life itself is also full of melodrama.”

“Tales of the star-crossed and lovelorn have captivated generations of audiences across the world through soap operas, teleseryes, telenovelas and the like,” says Elvena. “We’re hoping that audiences will be just as captivated by the plays TLE will showcase, and reflect on their own experiences.”

Local Filipino American theater artists make up a majority of the acting and directing pool for the show. 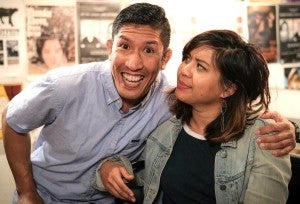 Fil-Am playwrights wrote three out of the seven 10-minute plays chosen this year out of close to 200 submissions. (A call for submissions was announced late last year.)

“Love Is a Verb” by Marygrace Burns is about best friends Ika and Wesley lamenting their respective ex-lovers, reminiscing about missed opportunities, and hoping for future love.

Marissa Martinez wrote “Be Your Own OTP.” In the fanfiction world, a “One True Pairing” is one’s favorite combination of fictional characters to pair together into the perfect couple. In the real world, for a fan like Kathy, it might mean something else entirely.

Conrad Panganiban wrote “Our Last Dance,” a play about former lovers Harper and Noah in their first encounter since they broke up, with their new partners in-tow.

“Praying for Love” by Emmanuel Romero is about Mandy and Marty’s realization of how much things will change after they get married. 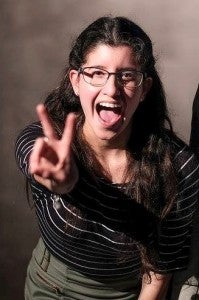 Jenny Cardenas plays Kathy in “Be Your Own OTP (One True Pairing).” PACIANO TRIUNFO

The other plays are: “IDWYT (I Don’t Want You To)” by George Smart; “The Cowboy and the Crow” by Alison Crane, and “The Beauty and Rodrigo” by Sonya Gray Redi.

Elvena and Paule have both been involved in previous installments of TLE, either backstage or onstage.

For this year’s installment, Paule says, “We have a fantastic diversity of plays from silly ensemble comedies to cynical relationship dramas. We even have plays with a touch of magical realism. Each play will be different from the last.” 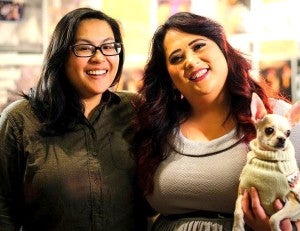 She adds that audiences will have their senses fully engaged. “The show will welcome them to the stage with a lovely visual installation created by Sarita Ocon that will float above the stage. There will be live music that will play through parts of the show.

Elvena says audiences can expect to have a charming and familiar experience, all the while “filled with that very emotional feeling of ‘kilig.’ ”

As an additional prologue to the show, the lobby will feature an installation by artist Robin Birdd. “It recreates a moment in time when you’re at grandma’s house watching telenovelas. We invite audiences to experience how Birdd challenges the fictional aspects associated with soap opera culture,” Elvena says.