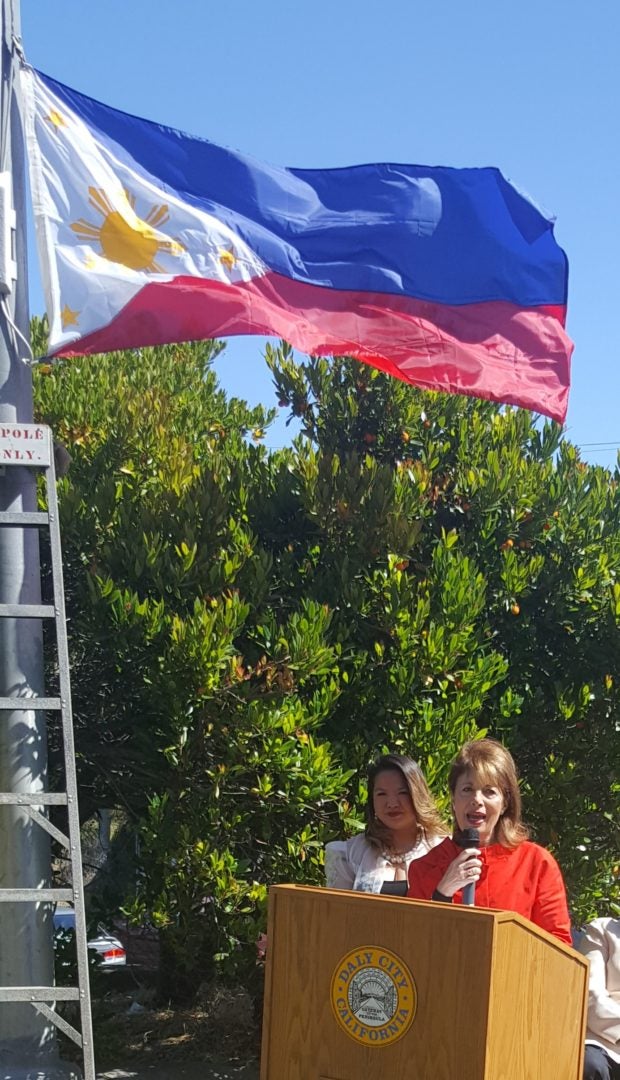 DALY CITY — A flag raising ceremony marked the 120th Philippine Independence Day as this city has done for the last four years, but a prominent California lawmaker found it the right time to apologize for the shortcomings of the United States to the country it colonized.

In her speech, United States Representative for California’s 14th Congressional District Jackie Speier admitted that during the time that Filipinos were struggling to get away from the shackles of colonizers like Spain, Japan, and the Americans themselves, “the United States was not a good actor during all of these.”

“I want to pay a special tribute to all the Filipino Americans and the Filipino nationals to say that I apologize on behalf of our country for our shabby activities during many of those years. It is part of the history of many of us especially the younger generation that may not be familiar with,” Speier acknowledged. 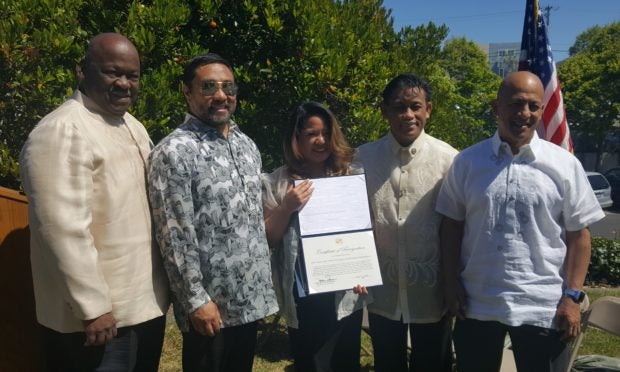 “In San Mateo County we are proud to have one of the largest and successful Filipino communities in the world. Daly City is 30% Filipino, and in fact one of my proudest moments was being able to identify the Filipino community in my district over and over again when Filipinos have come to Washington. Besides, Juslyn Manalo was the first Filipina to be elected member of Daly City council and subsequently the first Filipina mayor of the city.”

Aside from enumerating the contributions of some of the more popular celebrities with Filipino ancestry, among them actors Rob Schneider, Vanessa Hudgens, popular singers Bruno Mars, Arnel Pineda of the band Journey, Apl de Ap of the Black Eyed Peas, and Dancing With the Stars mainstay Sheryl Burke, Speier cited the final acknowledgment of the U.S. Congress of the service of over 250,000 Filipino veterans during World War II through a Congressional Gold medal, the highest civilian honor Congress can award.

“Although the granting of Congressional Gold Medal was an important step, it was not a complete conclusion because, again, we wronged Filipino veterans who we committed to for serving in WWII. We reneged on the promise [that we would consider U.S. veterans deserving of equal veterans benefits] and I continue to want to make sure that we right that particular wrong with the Filipino Veteran Fairness Act that I introduced in a number of Congresses in my term in office,” Speier pledged.

The Philippine flag flew over the Daly City Hall for the whole day of June 11 in celebration of Philippine Independence Day. INQUIRER/Jun Nucum

They all took turns in extolling the Filipinos who fought side by side with their American counterparts in World War II against Japan even if they had revolted against the same American forces in the previous century. They also praised the contributions of the Filipino community in the city.

“As we commemorate the 120th Philippine Independence Day, I reflect back to honor all those who have faded away — the heroes and heroines that had the bravery, the intellect, persistence to overcome the struggle and adversity towards freedom.” Manalo said. “It is my pleasure today to honor my roots in the Philippines just as the generation now needs to honor and cherish the history and never forget the struggle of the past.”

Weiner said he was “honored to represent Daly City and its vibrant Filipino community.”

Canepa stated that the Philippines’ relationship with Daly City “is one that is special and historic” and “I am glad that first Filipina mayor, Juslyn Manalo, is continuing the annual tradition we initiated of raising the Filipino flag during Philippine Independence Day.”

Meanwhile, Guingona recalled that awareness of the Philippines was heightened in Daly City after it became sister cities with Quezon City in 1994.

“It is a good thing to do this Philippine flag-raising here on a yearly basis to show our cultural pride. Having four members of the city council with Filipino lineages means we somewhat arrived in the sense that we have representation on the board,” said Guingona, who was among those instrumental in bringing Jollibee to Daly City in 1996t, he popular Filipino fast food chain’s first U.S. outlet.

Consul General Bensurto explained the agreement signed between Daly City, represented by Manalo, and the Philippine Consulate in San Francisco is in support of initiatives that would “make sure that new generations of Filipino Americans will remember their roots and their heritage.”