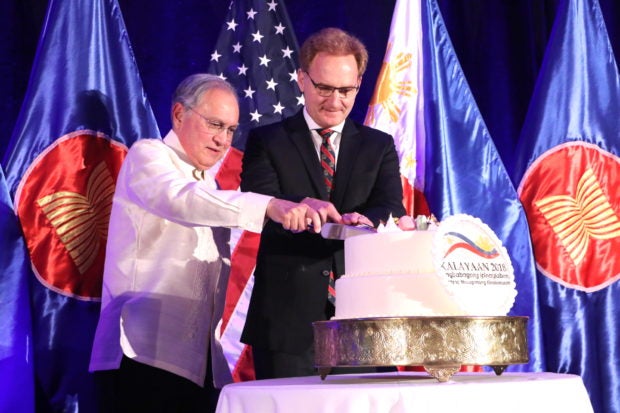 WASHINGTON, D.C. — Bookended by the Washington Caps victory parade in the morning and an LGBTQ community vigil late in the evening (June 12 events which many Filipino Americans participated in), this year’s Philippine Independence Day commemoration was marked by controversy, with Filipino Americans divided over a tradition that had usually unified them.

Except, of course, during the Marcos years. During that period, from 1972 to 1986, Philippine Independence Day was a contentious issue. While the Philippine Embassy and pro-Marcos supporters went about observing June 12 as a“Day of Unity,” opponents slammed any celebration under the “US-Marcos Dictatorship” as a mockery of democracy.

So, for 14 years, a divided community marked the occasion with dueling events. Opponents of the Marcos regime called theirs “Philippine National Day,” emphasizing the Filipino people’s “unfinished struggle for freedom and national liberation.” Marcos supporters, on the other hand, rallied behind the theme “One Nation, One Soul,” stressing unity with the regime’s “Bagong Lipunan” or “New Society.”

The People Power Revolution that toppled Marcos in 1986 eventually paved the way towards “reconciliation,” reuniting opposing forces to work together and help in the country’s recovery and reconstruction. Then- Ambassador to the U.S. Emmanuel Pelaez facilitated a successful “unity meeting” of all community leaders. From 1987 onward, celebrations of Philippine Independence Day were unifying events.

Until June 12 this year. Ambassador Jose Manuel Romualdez stunned many in the Filipino community when he decided to hold this year’s Philippine Independence Day reception at the Trump International Hotel. This time, it was the choice of venue that divided the community once again. Several prominent community leaders opted to stay away. 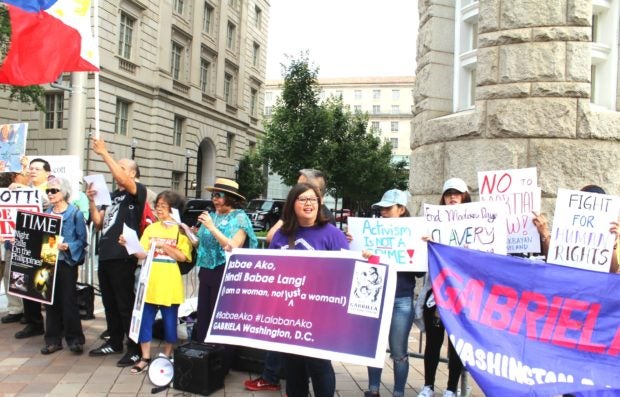 A coalition of community and human rights groups stage a protest outside the Trump International Hotel, surprising some of the invited guests to the reception who were greeted with anti-Duterte chants. INQUIRER

Mencie Hairston of Bowie, Maryland. said she always considered it an honor to be invited to Philippine Embassy events, but after much thought she sent her regrets. “I feel strongly that being at the Trump International Hotel runs counter to what we stand for in our personal lives and the advocacy work we do for our communities,” she said.

Reme Grefalda of Arlington, Virginia, however, felt differently. “As odious as it may sound to some of us, the Philippine Embassy is free to choose whatever venue for their celebratory events,” she noted. “Guests who traditionally celebrate the occasion with the Ambassador should not be labeled as being on one side or the other. Attending is not a statement of political support. It is in agreement that a good time will be had by all!”

The reactions, to say the least, were mixed. It remains to be seen how long this split will last given the strong emotions in the community towards Duterte and Trump.

It will be recalled that this luxury hotel along Pennsylvania Avenue used to be the Old Post Office Pavillion before its transformation in September 2016. Ironically, it was in this historic building that Filipinos, in the spirit of reconciliation, gathered on June 12, 1987 for its first community-wide celebration, “Araw ng Pagkakaisa” (Day of Unity).

The controversy, of course, stems from the political overtones of holding the event in a hotel owned by the holding company of the U.S. President, who has been sued for ethical and constitutional violations that have benefited his business empire. As the New York Times noted, the hotel has earned its status as “a place to see, be seen and curry favor with people in power.”

Even Ambassador Romualdez himself admits that holding the 120th anniversary of Philippine Independence is in itself “a statement.”  He is referring, of course, to “our good relationship” with President Trump. 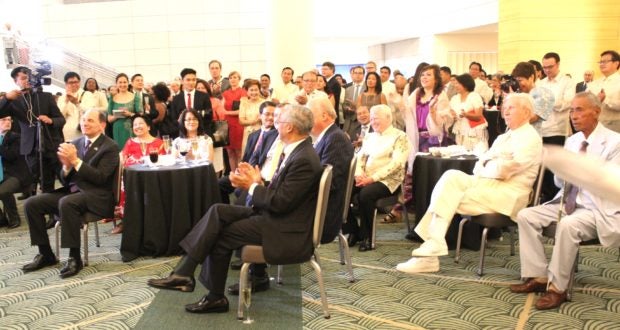 The June 12, 2015 reception hosted by then-Philippine ambassador Jose L. Cuisa, Jr. (center) at the non-controversial Reagan building drew leaders of community organizations and members of Congress from both parties. Many of them were notably absent in this year’s celebration at the Trump International Hotel. INQUIRER photo

But that “relationship” is now being questioned. The day after the Philippine Embassy affair, U.S. Senator Robert Menendez, ranking Minority Member of the Senate Foreign Relations Committee, sent a letter to Amb. Romualdez, asking why the event was held at the Trump hotel and how much the party cost. He requested that the ambassador respond by July 11.

Other embassies, which held their events there, have also received similar inquiries from the Senator.They include Azerbaijan, Bahrain, Kuwait, and Malaysia.

While more than 300 guests feasted and lifted their glasses inside Washington, DC’s largest ballroom, several community and human rights groups converged outside the hotel entrance to denounce the “Duterte-Trump collusion.” The demonstration grew to more than 60 people by the time the Embassy’s Independence Day party got underway inside.

Waving the Philippine flag and hand-made signs, which read “Stop the Killings” and “Fight for Human Rights,” the protesters chanted “Huwad na Kalayaan” (sham independence) and “The people united will never be defeated.”

Speeches by several individuals representing the organizers condemned Duterte’s policy of “extrajudicial killings,” the “intensification of Martial Law in Mindanao,” and the “widening waves of killings of activists, of indigenous peoples and even of priests,” including the “escalating political repression of critics of the Duterte administration.” 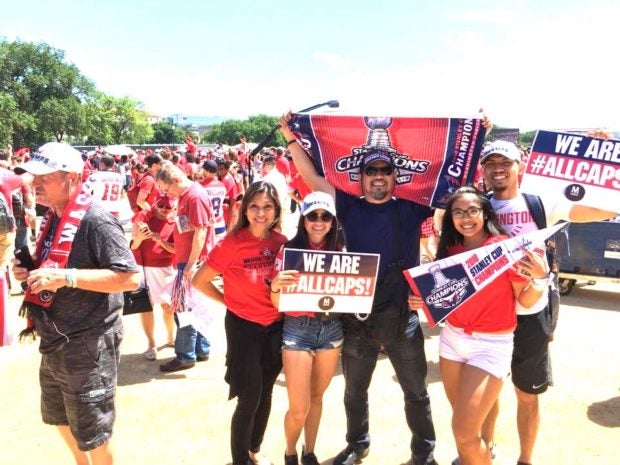 Jo Quiambao of GABRIELA DC called attention to the detention and torture of Jerome Aba (a Muslim Filipino human rights advocate) by agents of the U.S. Customs Border and Protection and of the U.S. Homeland Security at SFO International airport on April 19, 2018. Aba was invited by church groups to speak last April at the annual Ecumenical Advocacy Days conference, but he was prevented from doing so by Homeland Security and deported back to the Philippines.

Eric Lachica of the US Pinoys for Good Governance (USPGG), criticized “Duterte’s accommodation to Chinese encroachment and militarization in their recognized areas of the South China Sea.”

The protesters also called on Duterte to “Free De Lima,” the President’s fiercest critic, and to “uphold genuine democracy” in the Philippines.

The spirit of this year’s June 12 Independence Day celebration may have been marred by “no shows” and discordant voices, but even Ambassador Romualdez himself, to his credit, acknowledged that we “live in a democracy” and protesters are “free to express what they feel and we respect that.”

That’s a different tune from the Marcos years when peaceful protesters were labeled “subversives,” “communists,” and “terrorists” by Philippine Embassy officials headed at the time by an Ambassador also named Romualdez. Marcos goons also harassed and intimidated opponents who dared speak out against the government.

But the scene earlier in the day in downtown DC, a mile away from the controversial Trump International Hotel, was a lot more festive, communal and definitely devoid of politics. Hundreds of Filipinos from all over the metro area took off from work and joined thousands of fans cheer the world champion hockey team, the Washington Capitals. It was their first time to win the Stanley Cup.

Among those in the crowd was Bo Asinero of Manassas, Virginia, who came with his family and friends. “I’ve been a home team fan since we migrated to the U.S. in 1984,” he says. “It’s been a long time since our football Redskins won the Super Bowl in 1991.” 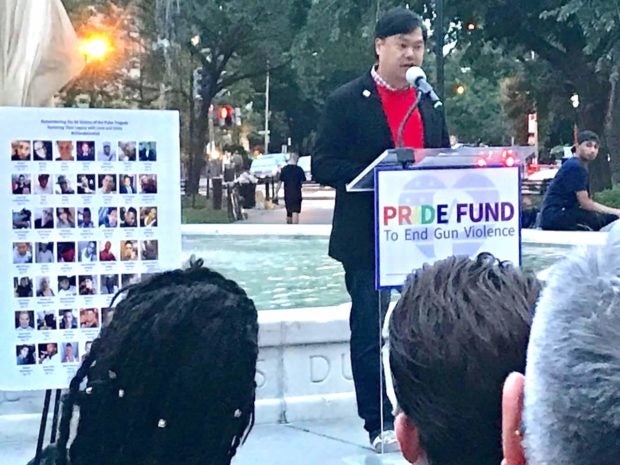 Ben de Guzman of the DC Mayor’s Office on LGBTQ Affairs speaks at a candlelight vigil a mile away from the Trump International Hotel on the same evening Philippine Embassy guests wined and dined to celebrate June 12. CONTRIBUTED

Asinero also notes that winning the Cup this year has unified the city, bringing together people from all walks of life, Democrats, Republicans, and Independents; Trump resisters and supporters; anti-Duterte and pro-Duterte backers; black, white and brown; rich and poor; gays and straight.

“There’s no politics or whatever here,” Asinero exults. “Just pure joy in celebrating a victory that brought everyone together in this city and throughout the region.”

‘A day of contrasts’

Later in the evening, a few blocks from the Trump Hotel, dozens of Filipino Americans joined hundreds of others at Dupont Circle to mark the second anniversary of the fatal shootings at Pulse Nightclub in Orlando, Florida. The  Candlelight Vigil mourned those who died.

“On June 12, 2016, two years ago today, the LGBTQ community was targeted,” said Ben De Guzman, a Filipino American official with the DC Mayor’s Office of LGBTQ Affairs. “A man filled with hate and armed with an assault rifle murdered 49 people and injured 68 others.”

Many shed tears as a Pulse survivor shared her experience and struggle after each of the 49 names were read aloud. The Gay Men’s Chorus of Washington set a solemn tone with their music.

“On a day when my colleagues in the District government were helping the Caps celebrate the Stanley Cup, my kababayansare recognizing Philippine Independence Day in many ways, and other dear friends are remembering the anniversary of the Loving v. Virginia Supreme Court case that struck down anti-miscegenation laws,” de Guzman noted.

“June 12 will forever be a day of contrasts.”