Anthony Bourdain, 1956-2018. Sisig and Lechon were some of his favorite Filipino food. TRAVEL CHANNEL

NEW YORK — Filipino chefs in NYC are mourning the death of celebrity chef and travel writer Anthony Bourdain who, according to news reports, hanged himself June 8 in a hotel in France.

“Anthony Bourdain’s death is a tragic loss to the culinary world,” said Jappy Afzelius, executive chef at Tsismis, a Philippine-inspired tapas & wine bar in the Lower East Side. “He was an inspiration for me to pursue traveling around the world and learning about food and culture.”

The Dumaguete-born Jappy trained in San Francisco and Paris before moving to New York. After working as executive sous chef at Manila Social Club, he went to Italy to study for his master’s degree in Food Culture & Communications at the University of Gastronomic Sciences in Pollenzo.

“I credit my move to Italy to his teachings,” he said. “He has motivated me to never stop pursuing learning about ingredients and to continue to be inspired about the beauty of what the world has to offer.” 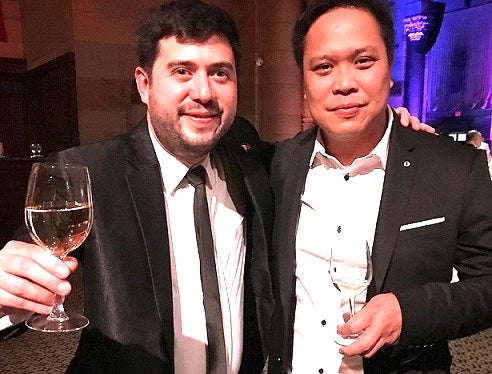 Bourdain was noted for bringing Filipino food to the spotlight through his food and travel program on television. He had predicted that Filipino food – particularly sisig and lechon — would be the next big thing, and that “Americans are just now starting to become seriously interested” in Philippine cuisine.

“I think certain Filipino dishes are more likely to take root and take hold more quickly than others,” the host of CNN’s food and travel show “Parts Unknown” said. “I think sisig is perfectly positioned to win the hearts and minds of the world as a whole. I think that’s the one that’s going to hook ‘em.” Lechon roasting in an open pit was once featured on his show “No Reservations.”

“The skin is extraordinary,” he declared after peeling off crispy skin from a lechon in Cebu, which proclaims itself as the roasted pig capital of the Philippines.

Aris Tuazon, a chef at Ugly Kitchen in the East Village, said he was “devastated and very sad” on hearing Bourdain’s death and the manner of his passing.

“He was my idol,” said Aris when reached by The FilAm.“He gave us so much hope and believed in Filipino cuisine that we will be in the mainstream one day. That helped us chefs to keep on moving forward and believe in what we do no matter what. He influenced me and many chefs and foodies.”

He continued, “He was a big part of the reason why Filipino food is starting to be recognized all over the world. His shows are always full of information and you’ll always learn something new. He will be missed.” Bourdain was reported to have hanged himself in Kaysersberg where he was filming an episode of his show. His suicide happened three days after fashion designer Kate Spade killed herself in her NYC apartment.

Born in 1956 in New York City, Bourdain grew up in Leonia, New Jersey, and graduated in 1978 from the Culinary Institute of America. He has said his love of food was ignited after eating his first oyster while on a family vacation in France.

Bourdain first became famous for his 2000 book “Kitchen Confidential: Adventures in the Culinary Underbelly.” He attracted a cult following on television.

His first show is A Cook’s Tour, which had 35 episodes on the Food Network in 2002 to 2003. His fan base exploded after “Anthony Bourdain: No Reservations,” which ran on the Travel Channel from 2005 to 2013. This was followed by “The Layover” on the same channel from 2011 to 2013, a show premised on what a traveler can eat in a particular foreign city within a 24-48 hour stopover.

“I believed in him so much that my team and I have been pushing to be a Filipino vendor in the Bourdain Market,” said Manny Imperial owner of the Sisig City Food Truck.

The Bourdain Market was envisioned to be a massive food hall with vendors offering a wide array of foodstuff. The plan is currently on hold.