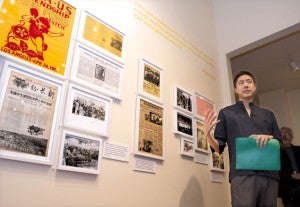 The Chinese American Museum in Los Angeles has an exhibit on Asian American activism. AJ PRESS

The photo is printed across the wall directly opposite the stairwell and elevator doors that lead into the downtown Los Angeles gallery’s second floor. Like the over 250 other artifacts it is showcased with, it illustrates how agitating for social change helped define what it means to be an Asian American and Pacific Islander (AAPI).

The New York-based historian and Los Angeles native traced the roots of AAPI activism to as far back as 1868, when young people started to reject the use of the word “Oriental” to describe their culture and began to adopt the term Asian American.

In the following decades, distinct communities associated with people’s country of origin developed nationwide, despite laws passed by Congress limiting the flow of immigrants from Asia into the country.

Amidst a swelling tide of activism during the 1960s, AAPI communities decided that they needed to band together as a cohesive voice in order to speak out against injustice. They, alongside advocates of the African-American, Chicano-American and Women’s empowerment movements, were part of a collective front pressing for equality.

“The Asian American movement wasn’t just about us being Asians,” Florante Ibanez — a social organizer during the ‘70s, historian and California Library Services Board Member — told the Asian Journal on Thursday.

The Pasadena City College adjunct professor, who teaches a class on the Filipino American experience, added that “the framework that we were in back in the day was a whole social movement, or flow as we called it, of political activity and enthusiasm.”

He described the ‘70s as a time when the spirit of revolution surrounded people and permeated their perception of the world.

“Roots,” which is named after the first textbook published by UCLA’s Asian American studies department, recaptures that encompassing sentiment of rebellion in a compact, densely informative and multi-sensory exhibition. It is organized into six sections which focus on art and media, feminism, anti-imperialism, anti-war activism, student activism, and community building.

A playlist featuring themes and musical genres prevalent during the ‘60s, ‘70s and ‘80s accompanies the newspapers, photographs, posters, clothing and other items on display. These include editions of periodicals like Amerasia Journal and the leftist publication, Katipunan, as well as bulletins and fliers printed for organizations like Kababayan and Search to Involve Pilipino Americans (SIPA).

When one stands at the threshold of the exhibit, the music coming from the left competes with audio from movies playing in an adjacent screening room to the right. Those were produced by Asian American filmmakers during the revolutionary era referenced by the exhibit.

Museum-goers in a hurry could walk past the show’s display cases and gloss over the wide array of artwork and literature in the museum’s small gallery in just a few moments. However, in doing so, they would miss out on the richness of the stories told by the words and imagery, which drench the eye-level space of the exhibition’s walls and hang from its rafters.

Wong and the CAM spent three years accumulating the show’s artifacts, the majority of which were lent from the personal collections of former and current social organizers living in Los Angeles who had taken part in efforts to bring about social change.

“Los Angeles, with its large Asian population, its many universities, which were hotbeds of activism, and with its historic communities, was really a center of what we know of today as the Asian American movement,” said Wong.

The museum’s curator hopes this collection of evidence attesting to a longstanding tradition of social agitation within AAPI communities would help dispel popular notions of Asian-American apoliticism.

He, along with Ibanez and CAM Interim Executive Director Sharon Chen, said they hope the exhibit, which opened the day before President Donald Trump’s inauguration, will help inform and empower concerned members of the community who might not feel like they have a voice.

They also said that the examples and lessons of those who pioneered the struggle for equality in America are now especially relevant, in light uncertainties felt by many communities of color and recent large-scale protests held throughout the country.

“It shows how…people who feel like they’ve been left out of the conversation can reclaim power,” said Chen. “Hopefully, this is [a] starting point for people to think about what we are still going through today.”