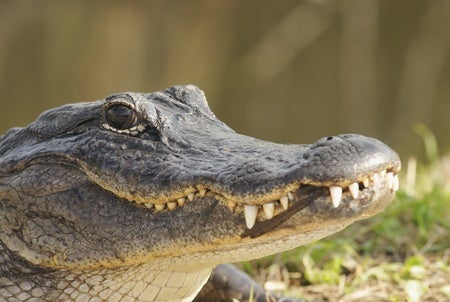 An alligator roaming loose in a city in central Florida headbutted a trapper in a bid to escape.

Ocoee resident Jack Redding filmed how the reptile knocked out the unidentified man, who was working for the Florida Fish and Wildlife. The trapper was called by a local resident after neighbors reported an eight-foot-two alligator on the loose.

In Redding’s video uploaded on his Instagram on May 26, it showed the trapper and police officers carrying the tied alligator at the back of a pickup truck.

The alligator swiftly moved his head toward the man’s, knocking him out unconscious.  It also wagged its tail toward an officer, but missed.

“It was pretty crazy!  I didn’t know what to do,” Redding told Fox 35 WOFL on Wednesday.

Residents said that the gator had been walking around the neighborhood for quite some time before the trapper was called.

“It literally crossed the street from our house,” a local named Jim Jarrells told WKMG-TV. He described the gator as “a pretty good size. It was pretty fat.”

The Ocoee Police Department posted an update, saying “the trapper is doing well and no one was seriously injured.” Katrina Hallare /ra