José Rizal and the Sacred Heart of Jesus

José Rizal and the Sacred Heart of Jesus 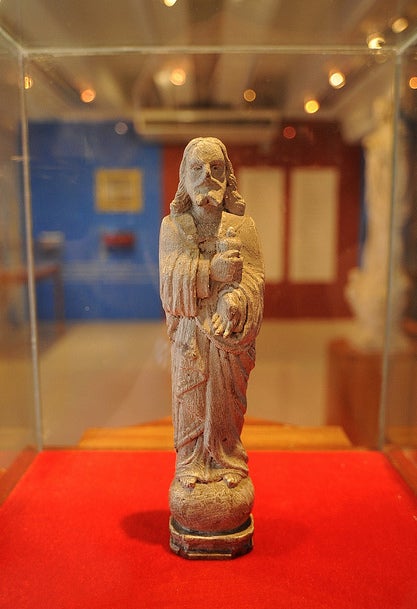 National Hero Jose Rizal carved this Sacred Heart of Jesus when he was 14.

Our National Hero, in writing the Noli Me Tangereand El Filibusterismo,proved himself a true-blue Mason and anticlerical.

In his time, almost always, our young Filipino students in Spain joined Masonry or otherwise gave up the practice of the Catholic Faith. The Spanish Jesuits in the Philippines were also vexed at the frequency with which countless Ateneo graduates turned to Masonry (Letters of Miguel Saderra Matá, SJ, Rector of Ateneo, to Joaquin Sancho SJ, 28 October 1896).

The French philosopher and mathematician Rene Descartes, who put Reason above Faith and glorified human reasoning as a beacon for those who were tired seeking happiness, carried a lot of weight and influenced Rizal.

On his first trip back to the Philippines in 1888, Rizal was active in stirring up anti-friar sentiment among his friends and associates in Manila, prompting radical changes in many families that he visited, some of whom did “not even wish to go to Mass afterwards” (Letter of Valentín Ventura to Rizal, 13 July 1888).

But that’s only the middle part of Rizal’s short but meaningful life story of 36 years. Something supernatural, if I may, qualify the first part and the final portion of his life.

José Rizal and his siblings read the family Bible in Spanish and their mother, Teodora Alonzo, explained the difficult passages they were not familiar with.

The Rizal family went to Mass on Sundays and Catholic days of obligation. They prayed daily at home, particularly the Angelus at sunset. Before retiring to bed at night, they would pray the Holy Rosary in Spanish together and then all 11 children would go and kiss the hands of their parents, Francisco and Teodora. Home was indeed the first chapel. Wrote José Rizal: “My mother taught me how to read and to say haltingly the humble prayers which I raised fervently to God”(Memorias de un estudiante de Manila, 1878).

Teodora Alonzo taught him to love God above all and, I dare say, his love of country flowed from his love of God.

Teenager’s carving of the Sacred Heart

At the Ateneo de Manila, the budding pupil Rizal, 14, carved a statue in honor of the Sacred Heart of Jesus.

Of all subjects, why the Sacred Heart of Jesus? The seed of Catholic Faith has been planted in our hero’s soul and maybe, just maybe, the personal devotion he learned from his mother blossomed.

There was something unique and dynamic in Rizal’s representation of the Heart of Jesus: Our Lord’s chest emptied and the Sacred Heart in His fist.

The Sacred Heart of Jesus is not a symbol but a true heart that loved and continues to love humankind. “And the Word was made Flesh,” assumed a human heart, “and dwelt among us” (John 1:14).

The historical and Biblical Heart Attack was a spear tearing the flesh of Jesus on his side until it wounded His Heart. “One of the soldiers pierced Jesus’ side with a spear, bringing a sudden flow of blood and water” (John 19:34).

At 18 days, the heartbeat of the unborn child could be heard in an ultrasonic stethoscope. Our human heart, once it starts beating, does not stop working until the very last breath.

Wisdom tells us why the human heart is the best choice, that is, to show the nonstop love of God. It also means: “Where sin increased, grace abounded all the more”(Romans 5:20).

Last portion: At the hour of death

GOD FIRST and all the rest are secondary, his mother taught Rizal that. Hence, Rizal remained God-fearing, a pacifist, and peacemaker until the end. His last few days in Fort Santiago saw Jesuit priests coming in and out of his prison door one after another nonstop.

On the eve of his execution, during his supper, Rizal told Captain Dominguez he had forgiven all his enemies, including the military judges who unjustly condemned him to death.

He attended Holy Mass at 3:00 a.m. of December 30, 1896, went to confession before taking the Holy Communion, and was reconciled with God.

At 5 in the morning, teary-eyed Josephine Bracken and his beloved sister Josefa entered the room.  The Cuerpo de Vigilancia testified that Josephine and Rizal were married. Rizal gave Josephine a copy of the book Imitations of Christ in which he inscribed, “To my dear and unhappy wife, Josephine, December 30th, 1896.”

His Catholic marriage with Josephine Bracken was solemnized by a Jesuit in accordance with the Roman Catholic Ritual.

The devotion to the Sacred Heart did not change the Immortal God, but it changed the sinful and mortal devotee.

Jose Mario Bautista Maximiano is the author of 23 Plus Contemporary People (2019). Comments to [email protected]