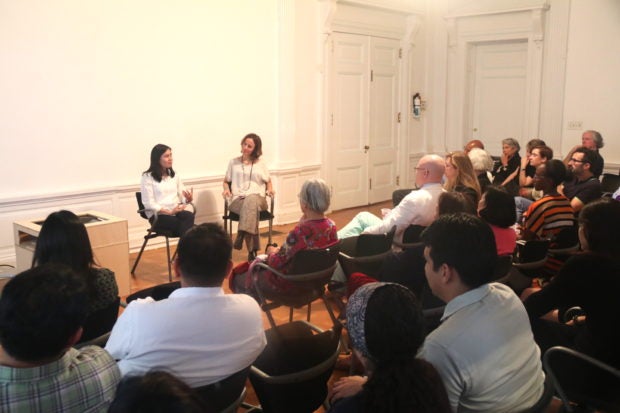 Philippine Embassy’s Public Diplomacy Officer Darell Artates and Embassy of Spain’s Head of Cultural Office . Maria Molina engage in a short discussion and Q&A session after the first screening night of the 2018 EuroAsia Short Film Festival featuring short films from the Philippines and Spain in the evening of June 4, 2018. CONTRIBUTED

WASHINGTON, D.C. — Filipino and Spanish short films kicked off the highly anticipated EuroAsia Short Film Festival (EuroAsia Shorts) 2018 on June 4 at the Former Residence of the Ambassadors of Spain.

Now on its 13thyear, the EuroAsia Short Film Festival spotlights the stories of WomenWorldWide through a weeklong screening.

“This year’s festival looks at the uniqueness and universality of women’s experiences, contributions, and perspectives in all aspects of life. Women, whether artists or family members, professionals or visionaries, everyday people or extraordinary heroines — it’s time the world paid attention,” reads a portion of the 2018 festival statement.

The Philippine entries for the first day of the festival are Johnny Loves Dolores and Nanay, which were written and directed by Filipino filmmaker Clarissa de los Reyes. Both films tackle the struggles and aspirations of Filipino women who make their living abroad.

“We are proud to present Johnny Loves Dolores and Nanay on the first day of the EuroAsia Shorts 2018 with the theme WomenWorldWide. Clarissa de los Reyes is an engaging and talented storyteller who is able to dissect the Filipino migrant experience into unique but relatable parts”, said Darell Artates, the Philippine Embassy’s public diplomacy officer.

“The feminization of migration is very pronounced in the Philippines. Johnny Loves Dolores and Nanay both highlight the consequences of this phenomenon for the migrant women themselves,” she further said during the post-film discussion that she co-led with Maria Molina, the Head of the Cultural Office of the Embassy of Spain.

The EuroAsia Shorts (originally the Asian-European Short Film Showcase) remains a collaboration between a small group of Washington, D.C. embassies and cultural center staff. Since 2006, the festival has presented more than 200 short films, including many award-winning shorts making their US debut. It will culminate in the showing of short films from the eight participating Embassies and the United States on 8 June 2018 at the Embassy of Italy. For more information, please visit http://awoj15.wixsite.com/euroasia-shorts.