A Filipi-NO on Calif. Prop 70: A vote for people over profit 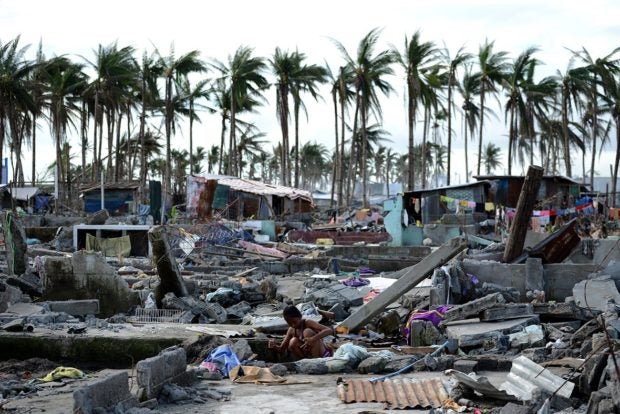 December 7, 2013: A girl sits among debris of destroyed houses in Tacloban, which was torn apart by one of the most powerful typhoons on record. (Source: IBT)

These were the words of Derek Cabe, the representative of Nuclear Free Philippines at the Forum on Human Rights and Climate Change back in May 2015.

Along with other Filipino organizations and individuals, they filed a petition in 2016 requesting the Philippine Human Rights Commission for an investigation of the “Carbon Majors” — big corporations like Shell, BP and Chevron — violations on human rights and impacts on climate change in the country.

This year, the commission will carry out a series of fact-finding missions and public hearings that link both human right violations and climate change.

Although the Philippines sees its (un)fair share of tropical storms every year, the past few years have borne the worst and most destructive typhoons ever recorded in the country’s history.

In 2013, Typhoon Yolanda ravaged a region of the country causing the destruction of lives, homes and other properties. With over six thousand deaths, millions of homes destroyed and millions more jobs lost, the aftermath reveals many realities. The government has always played a weak role in mitigating disasters like Typhoon Yolanda, and climate change has made it more intense and even more frequent.

As a Filipino immigrant who has called the Bay Area home for the past 14 years, this reality calls upon an overwhelming sense of urgency. I am inspired by the kind of action my folks back home are engaging in, calling out the Carbon Majors’ role in furthering climate change by identifying companies’ share in global industrial emissions.

I am with my people in seeking “accountability for the human rights implications of climate change on the workers’ health, labor productivity, work environment and safety, and job protection.”

All of these are on my mind as California prepared for the primary election today, June 5, in particular a statewide ballot measure called Proposition 70. The ballot proposition is a legislatively referred constitutional amendment that would require a one-time ⅔ vote to use revenues from the state’s cap-and-trade program. I call that budget gridlock.

If Prop 70 passes, it would seize funding that is currently being used to fight pollution, further destruction of the environment and improving health of communities in our state. Instead of investing in communities mostly impacted by climate change, particularly low-income and communities of color, funding would be held hostage by big oil polluters and corporate lobbying interests.

California is home to millions of Filipinos just like me. So many Filipino immigrants like myself rely on clean energy, affordable housing, transportation and other programs to promote the health and resilience of our communities through these funds. A vote of NO on Prop 70 ensures that we are united as a people to hold Carbon Majors aka Big Oil Polluters accountable to the the people and our environment. It is a message to our lawmakers that the current system we have in place is working, that California already has many systems in place to oversee climate programs. It is ultimately a life-affirming vote, a call to choose life of all forms over profit.

As Cabe reiterates, we won’t be just numbers in the global fight against climate change. We refuse to be mere statistics. Our vote of NO on Proposition 70 will ensure just that.