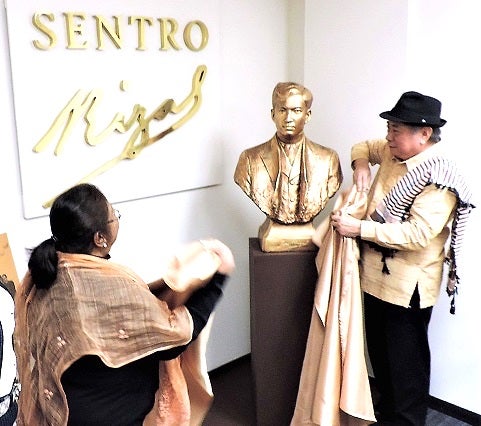 Unveiling the signage and bust of Jose Rizal. RICARDO CALUEN

On May 12 the Sentro Rizal was inaugurated in Toronto, Canada’s most populous city. The cultural center is located in the Philippine Consulate office on 160 Eglinton Avenue East.

In a simple ceremony, National Commission for Culture and the Arts Chairman Virgilio Almario and Consul General Rosalita Prospero inked the Memorandum of Agreement outlining the key responsibilities and commitments of the departments they represent in ensuring the successful implementation of the Sentro Rizal goals and objectives.

The signing of the MOA preceded the ribbon-cutting ceremonies and unveiling of the signage and marker.

In her welcome remarks, Prospero highlighted the significance of a Philippine cultural center in the heart of the Greater Toronto Area which is home to about 350,000 to 400,000 Filipinos or half of the entire Filipino population in Canada.

Almario, National Artist for Literature and also chairman of the Komisyon ng Wikang Filipino, said it is very appropriate for Filipino cultural centers around the world to be named after Jose Rizal who is generally regarded as the first Global Filipino. Almario recited a few lines from a poem by the national hero where he expressed his sentiments of pining for home. He characterized today’s overseas Filipinos as just like Rizal: always leaving the Philippines but forever longing for home.

For her part, Astravel Pimentel-Naik, executive director of the Commission on Filipinos Overseas, underscored her department’s role in ensuring that Filipinos in the diaspora remain rooted in their cultural heritage. She cited the role of CFO in the dissemination of copies of the Virtual Sentro Rizal or VSR.

The VSR is targeted at tech-savvy Filipinos and the youth, bringing the traditional mode of appreciating Filipino heritage into the digital age. It is a portable, multi-lingual collection of selected Filipiniana references in DVD format which were culled from the library collection of the National Commission for Culture & the Arts with additional materials sourced from cooperating producers and publishers.

Sentro Rizal aims to promote Filipino art, culture, and language as stated in Section 42 of Republic Act 10066 known as the National Cultural Heritage Act of 2009. The law states that the Sentro Rizal “shall be a repository, inter alia, of materials on Philippine arts, culture and language: books, digital video discs, compact discs, films, magazines, artworks, tourism promotion materials, information materials, etc. that shall be made available to the public, both Filipino and foreign.” Folk singer and songwriter Joey Ayala, himself a former chairman of the Committee on Music of the NCCA, provided entertainment during the launch. The Mindanao-born Ayala is a pioneer in the incorporation of ethnic instrumentation and melody in neo-folk music compositions. He gladly obliged with song requests, like “Aguila.” The singing of the patriotic anthem “Bayan Ko” made some in the crowd misty-eyed.

While all this was happening, a young artist, Eric Tigley, was quietly doing a live painting of the event. Tigley is a Toronto schoolteacher and children’s book author. Almario had met him and other young Filipino Canadian writers and artists the day before.

In a private huddle with this writer and community volunteer Maripi Leynes before the ceremonies, Almario said he was very happy to note the active participation of the Filipino youth in Ontario in Philippine-themed programs and events.

When asked what the major thrust of his NCCA administration is, the former UP Dean replied it is working towards the creation of the Department of Culture and the Arts. Almario said cultural preservation and promotion is a gargantuan task requiring organizational growth.

Toronto now joins major cities in the world like Prague, Buenos Aires, Seoul, Jakarta where there is a Philippine cultural center or Sentro Rizal overseen by the diplomatic missions of the Department of Foreign Affairs.

The opening of Sentro Rizal in Toronto is auspicious as the consulate prepares for the celebration of the 120th anniversary of Philippine Independence on June 12.