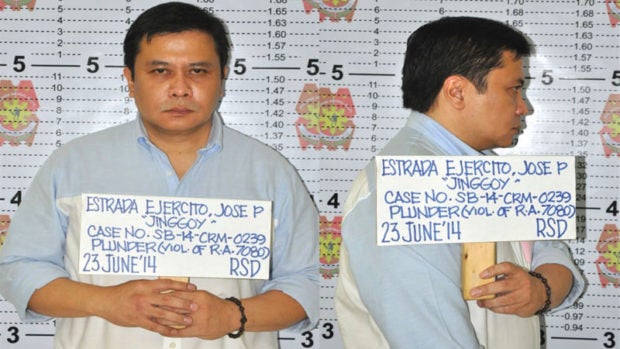 Just as I thought our group, the US Pinoys for Good Governance (USPGG), had clarified that we never invited jailed Sen. Jinggoy Estrada to the United States to speak, he tried to pull us back into his false storyline on why the Sandiganbayan needed to grant him permission to travel. Read this report that ran May 23 in BackroomPolitics.net:

Jinggoy bullies lawyer who exposed his ‘fake invite’ to US

Another shameless display of lack of class.

Jinggoy Estrada, despite his and his family’s wealth, power and influence, just can’t learn how to act with honor and elegance.

Using the social media platform Facebook, the former senator threatened, harassed and bullied US-based lawyer Rodel Rodis who earlier revealed as fake the claim of Estrada that he was invited to speak in Michigan for an event organized by Filipino-American advocates of good governance.

The supposed invite was utilized by Estrada in asking permission from the Sandiganbayan who is currently trying his plunder case to allow him to travel abroad and visit America.

Under the rules, accused in criminal cases especially those who are given temporary liberty after posting bail cannot travel outside the country without first getting the permission of the court where the case is pending. The court eventually allowed Estrada to go to US and a travel authority was issued correspondingly.

But the US Pinoys for Good Governance (USPGG) led by its chair Loida Nicholas-Lewis and president Rodis vehemently denied that Estrada was invited by their group. They accused Estrada of using a sham invite so he can go to the US.

In his Facebook account under the name CitiSen Jee, Estrada shared photos of his supposed speaking engagement in Michigan. He thanked those who attended the event for the warm welcome. He also averred that the photos disproved the accusation that he lied to the court in order to secure an authority to get out of the country.

“I hope that these photos will dispel the accusations/innuendos that I fooled/misrepresented the court by submitting a fake invitation,” he wrote. Estrada also made special mention of Nicholas-Lewis, Rodis and the Philippine Daily Inquirer (PDI) and asked them to see his good intention in accepting the invitation.

Both officers of the USPGG were tagged by Estrada’s followers in the comment thread to call their attention about Estrada’s FB post. In response, Rodis commented that the photos only confirmed that, contrary to what the former senator has indicated in his motion before the Sandiganbayan, the event that he attended was not organized or sponsored by the USPGG. “How could Jinggoy claim the photos refute the accusation that he received a fake invitation letter from the US PINOYS FOR GOOD GOVERNANCE when they only confirm that it was NOT a USPGG sponsored event?”

Thereafter, an angry Estrada began replying to the comments of Rodis where he threw invectives and insults, calling the lawyer names and threatening to barge into that latter’s law office to confront him.

Rodis in his own Facebook post shared screengrabs of his heated exchange with Estrada whom he called as “the plunderer.”

Estrada has the right to defend himself on what he thinks is an untruthful accusation. But, with his stature, he could have done it in a way that is not cheap, disrespectful and unbecoming of his former national position as an elective public official.

He is contemplating to run again as senator in 2019 despite the pendency of the plunder charge against him. Remember his behavior and actuations before considering him in your ballot.

Moral of the story? You can’t equate class with wealth.