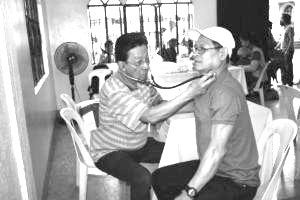 Co-sponsors of the missions were Phil-Am Charity Foundation(PACF) and the Nevada Chapter of the FEU-DNR-School of Medicine Alumni Foundation.

Held annually, this project is funded by the missionary volunteers of these two missions themselves, and this year supported by Mayor Loreto Masa of Alaminos, his wife, and his cousin, Mrs. Lily Starkman of Illinois, and Fr. Joey Faller, the Healing Priest at Kamay ni Hesus Pilgrimage Shrine.

“Partnering with healthcare volunteers from different universities, and working as a team in this humanitarian endeavor to help our less fortunate fellowmen back home, provides a deep sense of inner joy and satisfaction,” according to the missionaries.