Should the U.S. be dealing with a dictator? It did in PH

Makes you wonder. But then, I recall in 1981 when then Reagan Vice President George Bush praised Marcos for his “adherence to democratic principles and to the democratic processes,” and well, you know there’s a lot of showbiz in politics.

That was on my mind when I saw Donald Trump on his middle-of-the-night rendezvous with three Korean Americans this past week. At first blush, it was an unintentional photo op for Asian American and Pacific Islander Month. 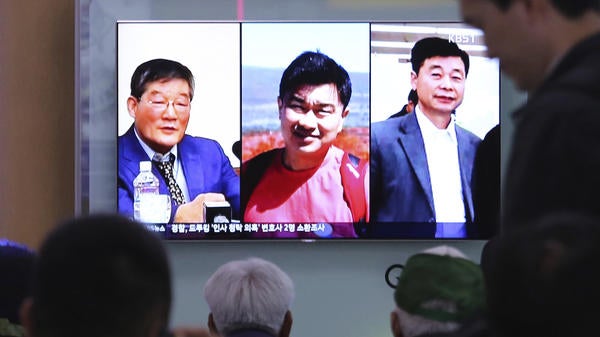 Freed were Tony Kim (Kim Sang-dok), an accounting professor at Pyongyang University of Science and Technology, held since April 2017 for “criminal acts of hostility;” Kim Hak-song, a colleague of Tony Kim’s who has been detained a year for “hostile acts;” and businessman Kim Dong-chul, who immigrated in 1972 to the U.S. and was held nearly three years when he was suspected of espionage.

Trumped up charges (pun intended). This is what North Korea does. Imprison people unfairly.  Starve people to death. Take away rights. It’s the M.O. of the dictator Kim Jong Un. Most of the victims are his own people.

So a trade for three Asian Americans and a peace deal to be named later, that’s sort of reason to be happy. But let’s not forget all the other people under Kim’s thumb. I was struck by the specificity of the headline I saw in The Wall Street Journal: “North Korea Frees Three U.S. Citizens.”

I guess that last detail was thrown in, just in case Americans see pictures and the videos of the freed men deplaning with Trump and wonder who are all those foreigners with our xenophobic leader?

No, he’s still the xenophobe-in-chief. He hasn’t gone soft on people of color. That atmosphere of suspicion and doubt over non-white people that Trump has created in his short tenure gets turned on and off as needed.

But three U.S. citizens is a drop in the bucket compared to the hundreds of others that remain imprisoned in North Korea.

Don’t worry all you Trumpians. The U.S. isn’t talking to North Korea for general humanitarian reasons. There won’t be a program for defectors flooding the U.S.

But things are just a bit different now as Trump starts acting like his buddy Don King in pre-fight promotion stage, selling the big peace summit with North Korea now set for June 12 in Singapore.

Or will we be getting something less? Perhaps something more acceptable for political show biz, closer to the proverbial “whirled peas”?

The summit process moves quickly because both Trump and Kim Jong Un really need this thing to happen for their own personal reasons.

Saddled with new developments every day in the Russia probe, Michael Cohen’s handling of the Stormy Daniels hush money payoff, not to mention his pay-to-play antics selling access to Trump as his personal lawyer, Trump would like one big hole-in-one.

He’s looking for a one shot big deal where he can say his unorthodox politics have taken us somewhere no previous president has even dared. (Maybe there was a good reason.) If Trump succeeds, call it a victory for on-the-job-training. It’s always Trump first, remember.

What about peace? Did you think the man who just faked out his allies and pulled out of the Iran nuclear deal is interested in peace?

And what does Kim want?

If you haven’t noticed, Kim Jong Un’s stature as the mad bomber has toned down a bit over the last year, mostly because now he fears global isolation.

“He’s running out of options,” said Kim Pil-Ju. “I think China turning its back was big.”

Kim Pil-Ju, a college student in his 20s, has lived in South Korea the last 12 years and calls himself the “boy who got away.” He escaped from the north in 2006.

He was on the Asian Boss channel on YouTube. If you’re interested in what real people in South Korea are saying about the summit, the Asian Boss YouTube Channel is a good resource.

I’ve been watching it for takes you won’t get watching or reading the mainstream news. Who talks to regular Koreans or Korean Americans in the regular U.S. mainstream press?

Asian Boss is run by Stephen Park in Seoul, who has been doing interviews with South Koreans (in language) on the prospects of a peace summit and reunification.

So it’s a bit of a revelation to hear people like Kim Pil-Ju on Asian Boss. He feels the speed of the summit process is related to North Korea’s fears that if a move toward reunification isn’t done now with the current Moon administration, then all bets are off if a more conservative government takes over in the next South Korean elections.

“If a conservative party takes power, it could give North Korea an excuse to restart its nuclear program,” Kim Pil-Ju said.

The politics of South Korea will surprise you. While many Korean Americans may cry and cheer the historic nature of Kim Jong Un and Moon Jae-in crossing over the DMZ marker, many Koreans are deeply divided.

But younger people in their twenties know just a few things about North Korea–mostly that the people are poor, starving, and brainwashed. Getting the north up to speed will take money away from the south, and even raise taxes and hurt the economy.

The latest Asian Boss features Kim Pil-Ju with another defector from the North, Oh Eun-Jung, 27. She escaped to South Korea ten years ago when she was 17.

Oh Eun-Jung was skeptical of the summit at first, especially considering the unpredictable nature of Trump. She thinks Kim Jong Un looks at Trump as someone crazier than himself. “I think he’s a bit scared,” she said.

But she also wonders why Kim Jong Un would give up his power. If he steps down, Kim most surely will be tried in international criminal court. “He doesn’t need nuclear weapons if he can be guaranteed power,” she said on the show.

Kim Pil-Ju agreed. “That’s his condition for the U.S./North Korean Summit,” he said. “You guarantee my regime and I will denuclearize. I think that’s how it will play out.”

For these North Korean defectors, as it is for the world, it’s a moral dilemma. Peace is good, but should we be supporting a dictator who has killed countless people? And let him get away with it?

“If we don’t give him what he wants, more lives will be lost,” Oh said.

Kim Pil-Ju, who called himself a victim, points to the 31,000 defectors in South Korea, and the 100,000 in North Korea. He said that number multiplies when you consider family members left behind, many of whom remain imprisoned. He just wants to see Kim Jong Un punished.

“He has to pay for his inhumane and unethical conduct,” Kim Pil-Ju said.  “He starved an entire country and executed many. . .Kim has to pay for all that.”

Somehow seeing Trump at his photo op this week with the three Asian Americans, I don’t think any of that registers under the presidential hair-do. I hope it does by time the summit hits.

Three are free, but there are many, many more where they came from. Trump may not seem to care about any of them, but the closer we get to the summit, all of America, should, not just Korean Americans, or Asian Americans of every stripe.

Emil Guillermo is a veteran journalist and commentator who covered Washington in the 80s and 90s. He writes a column for the Inquirer’s North American bureau. Twitter @emilamok.  Listen to him on Apple Podcasts.