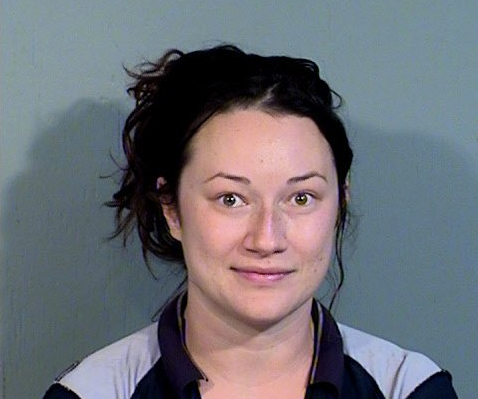 Jacqueline Ades of Phoenix, Arizona, was arrested on May 8 for several instances of stalking a man she met online. She also allegedly sent him 65,000 text messages.  Image: Paradise Valley Police Department

A woman in Phoenix, Arizona, was arrested on Tuesday for several instances of stalking a man whom she had met online. She was also said to have sent 65,000 text messages to him, some of them threatening.

Jacqueline Ades, 31, will face charges of threatening, harassing, stalking and failing to appear in court, a statement from the Paradise Valley Police Department said.

She and the unidentified man met on cyberspace and went out on one date. Ades then started to message him endlessly after he told her not to contact him anymore.

Other incidents that Ades did were trespassing onto the man’s home, sending him threats to kill him and showing up in his workplace claiming to be his wife.

When asked why she did all of those, Ades told local media 3TV/CBS5 on Thursday in a jailhouse interview: “I felt like I met my soul mate and I thought we would just do what everybody else did and we would get married and everything would be fine.”

About the massive number of text messages she sent him, Ades reasoned: “Because it made me find out all my information.”

“Loving him selflessly brought me his information. Because everybody just wants to take. But if you just give and you don’t stop giving, you will all of a sudden receive a lot,” she went on.

When confronted about the messages that were more threatening than loving, she replied: “When you find love, everything is not perfect. I love him.”

Ades is set to appear in court June 15 and is being held without bond.  Katrina Hallare /ra

LOOK: Florida boy gets himself stuck in claw machine