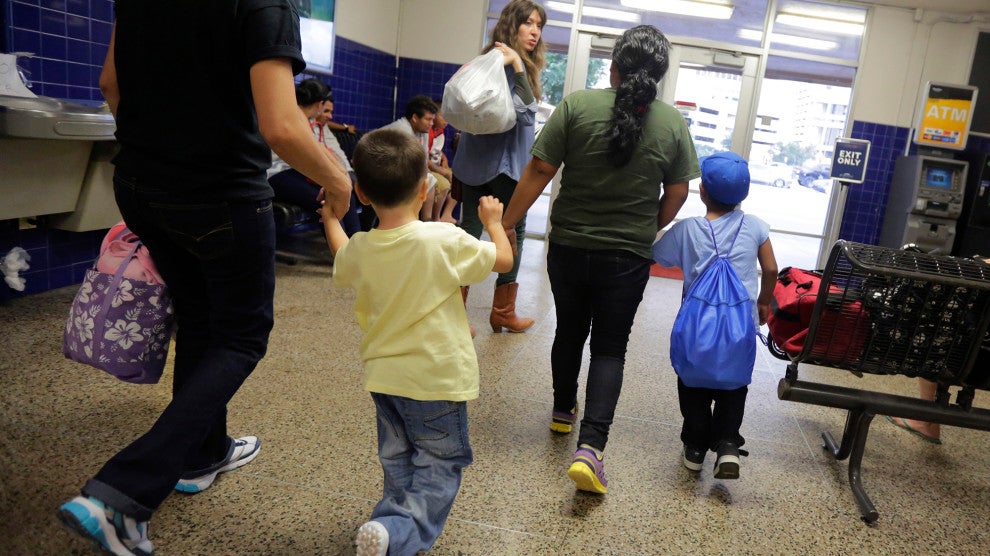 In this July 7, 2015, file photo, immigrants from El Salvador are seen after their release from a family detention center in San Antonio, Texas. AP PHOTO

LOS ANGELES — In order to tighten up immigration enforcement, the Trump administration will escalate criminal prosecutions of parents illegally entering the United States and place their children in protective custody, according to federal immigration officials.

Speaking at Friendship Park in San Diego adjacent to the U.S.-Mexico Border on Monday, May 7, U.S. Attorney General Jeff Sessions and Thomas Homan, acting director of U.S. Immigration and Customs Enforcement (ICE), said the administration is adopting a “zero-tolerance policy” toward anyone crossing the border.

In other words, asylum seekers would be immediately directed to the Department of Justice (DOJ), and everyone would be taken to jail and prosecuted for the misdemeanor of illegal entry into the U.S.

“People are dying trying to enter this country. There is a right way to do it and a wrong way to do it,” said Homan.

Sessions said that at this time, parents may be separated from their children after the arrest.

“This border is not open. Don’t come unlawfully. We cannot take everyone on this planet who is in a difficult situation…If we do our duty to prosecute most cases, then children inevitably for a period of time might be held,” the attorney general said, prompting outrage from protestors on both sides of the border.

Previously, individuals who were apprehended at the border would be immediately deported without criminal charges. An asylum seeker who crossed into the U.S. illegally would have officially committed a federal misdemeanor, but the Dept. of Homeland Security would process their asylum case before being referred to the DOJ for prosecution. Even after being referred to prosecution, the DOJ wouldn’t prosecute until the asylum case was processed and completed.

This new law would send asylum seekers straight to federal prosecution without having to process an asylum case first. Sessions has postulated that many asylum claims are fraudulent and propagated by “dirty immigration lawyers.”

Additionally, this new law, while adhering to the administration’s mission to stiffen immigration policy, could overwhelm the already-crowded detention centers and add on to the massive backlog of cases in immigration courts.

“If you are smuggling a child, then we will prosecute you and that child will be separated from you as required by law,” Sessions put it in an earlier meeting in Scottsdale, Ariz.

The administration’s plan to impose immediate criminal charges on border crossers and asylum seekers comes as no surprise. Ending the phenomenon known as “catch and release” has been a key part of the president’s immigration agenda.

For decades, thousands of Central Americans have been trying escape gang violence and political turmoil of their native countries by seeking asylum in the U.S. In recent years as violence and unrest continues to plague the region, more and more asylum seekers have been trying to find a way into the United States.

Many of these asylum seekers travel in large caravans every year in order to protect themselves. A caravan of 300 people from Guatemala, Honduras and El Salvador is currently trying to make its way through Mexico in groups of about 50 to seek asylum at the U.S.-Mexico border.

Global human rights organization Amnesty International USA slammed the new policy to separate parents from their children and have said they planned to challenge it in a court of law.

“The idea that children can be protected by tearing them away from their families defies all sense of logic and humanity,” said Executive Director of Amnesty International USA Margaret Huang. “These are children who have already suffered the trauma of violence and persecution in their native countries and arduous journey to seek safety. Why in the world would the U.S. government institute a policy that would compound their distress by separating them from their families, claiming it’s for their own good? This is a monstrous policy that flies in the face of human rights and should be rescinded immediately.”