It’s not fun when PH ads in NY are vandalized, says tourism attache 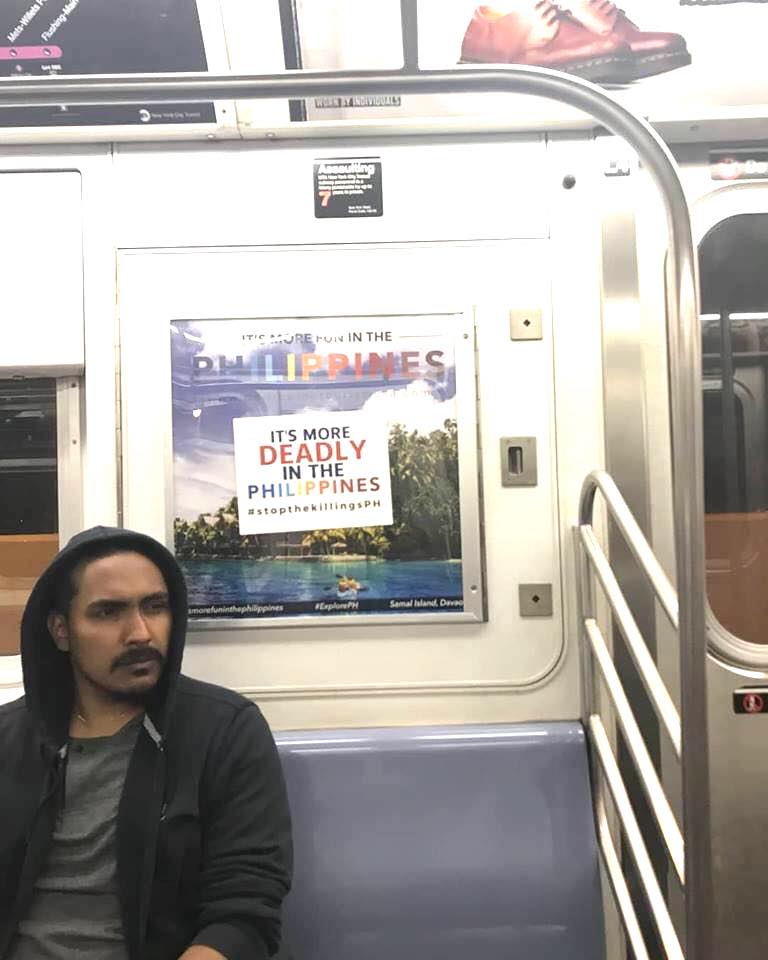 “Sad because effort ito ng mga Pilipino,” she told members of the Fil-Am media in a press conference. “We would like to promote our country to have a very good image. And then they have to do this.”

She was referring to the outdoor advertising “It’s More Fun in the Philippines” posted all over Manhattan on subway trains and buses. They are also visible on subway platforms and on Times Square digital screens.

The acts of vandalism appear to be directed at Philippine President Rodrigo Duterte, in some calling him a ‘Fascist’ because of his government’s brutal campaign against drugs. An estimated 12K suspected drug pushers and users have been killed by Philippine police.

Asked who she thought was behind the graffiti, Del Mundo replied, “Perhaps the same group who are against EJK” (extrajudicial killings).

A mobile ad in New York can be very expensive. Del Mundo said she had no idea of cost because such advertising was commissioned by the Department of Tourism (DOT) office in Manila.

Just to give an idea, the New Yorker magazine reported in 2016 the cost of outdoor advertising.

The frequency and size of the ads need to be determined to get a closer estimate of the cost. Del Mundo said the DOT has about 1,000 posters on trains and subways.

She said the DOT has a modest budget, but Tourism Secretary Wanda Teo made sure New York gets a big chunk of the budget for its marketing campaign because NYC is a “global center.”

The DOT has a budget of P3.1 billion (approx. $59.7 million) for fiscal year 2018, according to the government’s Department of Budget and Management. 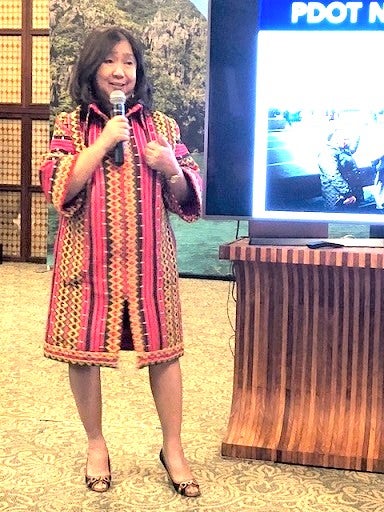 Said Del Mundo, “New York is a source market, a hub. We’re not only targeting the New Yorkers but also the foreigners who are visitors here. New York is the global trend center.”

Del Mundo said she has not received any complaints from tour operators about the planned closure of Boracay island off Aklan province. The Duterte Government has closed Boracay – voted Conde Nast’s Best Island – for six months beginning April 26, to clean up garbage and debris that have accumulated ever since it became a tourist destination in the 1970s.

“There’s not so much impact,” she said.

The government cannot continue to promote Boracay as a premier destination if the island begins to deteriorate, she told reporters in the press conference.

There are alternative locations around the Visayas region, she added. She named Sicogon and Gigantes islands in Iloilo, and Guimaras in Panay. She conceded that Boracay had crowded beaches, and noted how some tourists, like Europeans, “like to go to less crowded places.”

“There are many islands that are comparable or better than Boracay,” she said, indicating the six-month closure would allow the DOT to promote other locations in the country.

Through all the negative publicity surrounding massive numbers of drug-related killings, she said tourism arrivals have actually gone up. In 2016, when Duterte became president, arrivals registered at 5.9 million, according to the DOT website. In 2017, the number rose to 6.6 million.