The announcement was made by Josh Vasquez, PAL area manager for New York, during a press conference with Tourism Attaché Susan del Mundo and members of the FilAm media at the Philippine Center’s Kalayaan Hall.

“PAL will be flying non-stop three years after PAL started flying again in March 2015,” he said.

The flight will be 15-and-a-half hours, and departs JFK Airport at 2 a.m. It arrives in Manila at 6 a.m. The frequency is four days a week, Monday, Tuesday, Thursday, and Saturday. The long-haul flight is PAL’s “ambitious strategy to improve its position in the highly competitive North American market,” according to Centre for Aviation, an independent resource for global aviation news and trends.

“You will be traveling for about 15.5 hours. We want you to maximize your time, sleep on the plane, eat, and when you wake up you’re off to your first appointment,” he said.

He continued, “When our headquarters asked me, are we ready for a non-stop flight, I said yes, because our kababayans in this part of the world deserve a non-stop flight.” He said Hong Kong and Japan have their own direct flights between NYC and their countries. “Why can’t Filipinos?”

For years, PAL was derided as ‘Plane Always Late,’ and bleeding financially because of old planes and poor cabin service. PAL has come back and will climax with the inauguration of its direct flight from Manila to New York City by the end of October 2018. 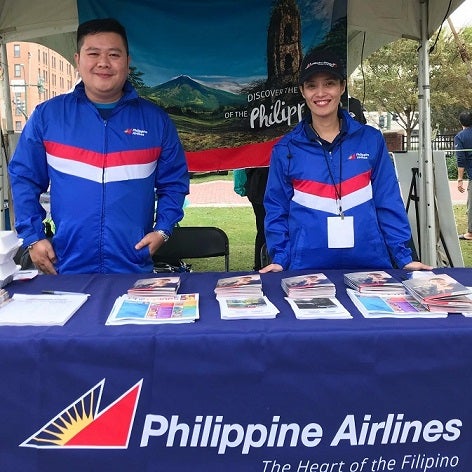 The hard work was done back in 2014 when the airline retired old aircraft, such as the Boeing 747-400. It swallowed $250 million in losses and purchased new fuel-efficient Boeing 777-300ERs and Airbus jets. The buying spree will run through 2021, according to the company.

PAL also revived moribund routes, such as the flight to New York City, which is popular among balikbayan travelers and businessmen who want shorter travel times. Improvements in PAL’s Manila-London flights along with those to Paris, Amsterdam and other European destinations followed.

Separately, the EU lifted a ban against PAL which allowed it to resume flights to London in 2014. After an absence of 16 years, the EU recommended that PAL be allowed to fly to Paris.

The refurbishing of PAL’s fleet goes a long way in explaining its return to prominence.

When tycoon Lucio Tan came back to replace Ramon Ang as PAL president, the turnaround was well underway. To Tan’s credit, he allowed the process to go through.

The reinstatement of Philippine civil aviation status to Category 1 by the U.S. Federal Aviation Administration in 2014 after being downgraded to Category 2 in 2008, over safety issues, gave PAL the opportunity to expand its North American operations.

Vasquez also said PAL was recently ranked a 4-Star Airline by Skytrax, the international air transport rating organization. The rating is the result of an in-depth audit of the airline’s inflight and on-ground service based on passenger experience, he said.

“Skytrax is the Oscars of the aviation industry,” he said. “Hopefully in the next two years we get our 5 Stars.”