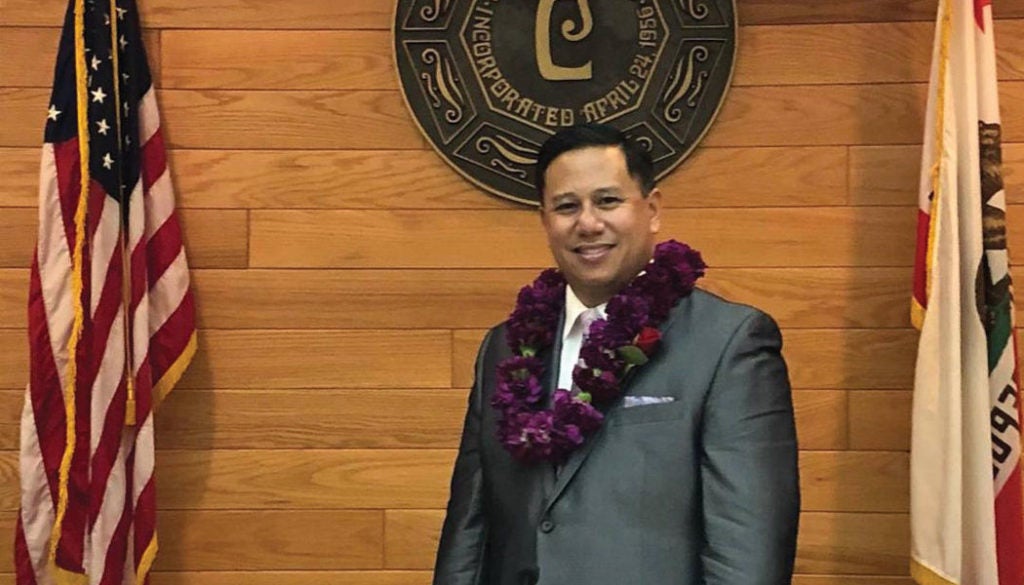 CERRITOS, California – This city swore in Mark E. Pulido as its mayor on Wednesday, April 25, four years after he became the city’s first-ever Filipino American to serve in the position.

“What I love most about serving Cerritos is the opportunity presented each and every day to give back to my hometown for the many blessings that I have received,” Pulido told the Asian Journal.

Pulido, who has called Cerritos home since 1972, considers the city’s residents his extended family, often helping the parents, grandparents, or even children of those he grew up with.

Outside City Hall, Pulido has an extensive history of service in both the local community, local state, and federal government.  With a passion for education, he served on the ABC Unified School District Board for several years and served as board president in 2007-2008 before concluding his service in 2011.  He also served as the board liaison for the ABC Federal Head State and State Preschool programs for seven years.

He was awarded by the Los Angeles County Office of Education its “Board Member of the Year” award in 2009.  In 2017, California Governor Jerry Brown appointed Pulido to the California Science Center Board of Directors and to the Los Angeles Memorial Coliseum Commission.

But Pulido’s leadership and community involvement started way back as a student of Cerritos’ Whitney High School, which has been ranked the number one school in California for several years.

Among his most favorite memories of growing up in Cerritos, Pulido said, was starting the high school’s Club Kaibigan in 1984, which is dedicated to enriching students with their Filipino heritage.  The club still exists today.

“That was my very first leadership position,” said Pulido, laughing.

“The purpose was to one, learn about the culture ourselves because we were born and raised in America.  And two, it was to share it with our friends who were from different backgrounds, thus the name Kaibigan,” he added.

Not much focus was being put on the Fil-Am youth during the 1980s and 1990s when gang violence, teen pregnancy, and substance abuse were among the social issues and challenges they faced, he said.

“I’m so proud of what we did collectively as young people,” he added.  Around 200 students were involved with the club, including his wife, Gloria.

For Pulido, starting the club sent him on a path of purpose and leadership, and taught him what it meant to be grounded in his community.

After high school, Pulido went on to study at the University of California, Los Angeles where he received his bachelor’s degree in history and Asian American studies and again honed his leadership skills by becoming the first Fil-Am to serve as UCLA student body president.

He then went on to receive his Master of Public Policy degree from the University of Chicago as a Woodrow Wilson National Fellow, during which he also served as a graduate fellow of the Congressional Asian Pacific American Caucus Institute at the U.S. Department of Justice, Bureau for Justice Assistance in Washington, D.C.

But Pulido eventually found himself coming back home to Cerritos with his wife Gloria — a Fil-Am who grew up in Cerritos herself — and who also attended UCLA where the couple was involved with the university’s Filipino organization, Samahang Pilipino.

Among tackling mayoral duties of preparing budgets, upgrading aging infrastructure, and ensuring public safety, Pulido’s long-term goals are focused on making sure the city’s plans are aligned with the needs and wants of its community members.

“I’m always interested in engaging with residents to find out what are their continuing priorities, and their hopes and dreams for new ideas and new programs to be established in the City of Cerritos,” said Pulido.

Before turning out of office in 2020, Pulido has his goals set to make sure its members are on the path of seeing their vision for their city fulfilled.

More specifically, Pulido wants to empower the city’s youth and provide them the best opportunities to become leaders of the future.

“I want to make sure we are doing things as a city, to assist families, our school districts, our communities, and the development of leaders of our future,” said Pulido.  “It’s so important that our civic leaders come together consciously to stress and implement programs and services that will fully empower our youth.”

Similarly, Pulido hopes to empower the community’s large senior population as well by ensuring them a continued good quality of life in their golden years.

“We’re a community where people move to because of the safe neighborhoods and quality schools which are factors that people look for when they want to raise families,” shared Pulido.

“But now, we have this dynamic called aging in place,” he added.  “Once people raise their kids and send them to college and enter retirement, people are choosing consciously to stay because they love their community.”

On Cerritos’ strong Filipino American community, Pulido said he was proud of what it has become.

Filipinos make up a large percentage of the city’s majority Asian community, with a population of 7,223.

“I’m so proud of our Filipino American community in Cerritos for being a dynamic model of what can happen when Filipino Americans come together to support each other socially, economically, and politically,” said Pulido.

“The Filipino American community of Cerritos is more than 50 years old and we have fully realized the promise of political empowerment, civic engagement in our community, and in doing so, we are equal partners with all communities in moving our city forward.  That is why I am so humbled to have the opportunity to lead as a mayor of Cerritos at this important time,” he added.