As balance of power changes in Asia, what does Kim really want? 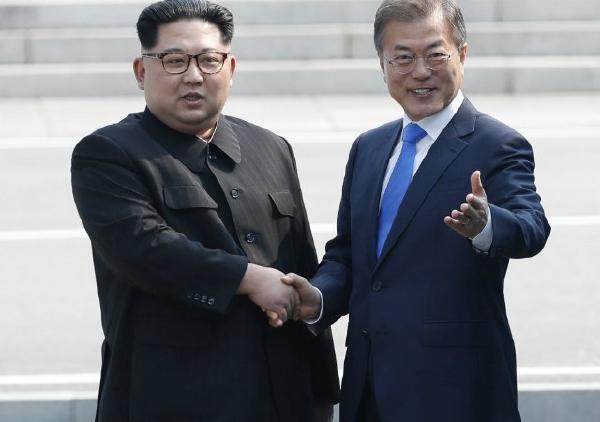 Let’s not make too much about the Korean summit quite yet. We’re still early in the hand of a high stakes poker game. That’s where we see way too many pleasantries like Kim and Moon holding hands, saying nice things to each other, and acting like lovesick pols, stepping over the threshold of the DMZ like a newlywed couple.

It’s the nuclear version of a shotgun wedding. Both need each other in the 21stcentury.

The South is running scared of the possibly reformed mad man, but happy to entertain reunification if it means it doesn’t have to fear the very real possibility of waking up every morning as burnt toast.

That is Kim’s power hand, of course.  Nukes are in the house. For the time being.

So it’s a big concession when Kim Jong Un tells South Korean President Moon that North Korea will close its main nuclear test site in May, as reported by several outlets.

It’s a big deal that Kim insists he will not fire missiles at the U.S. But do you trust him?

Let’s not forget the west’s concern. Donald J. Trump would like everyone to forget Russia, Urinegate, whores, and Stormy Daniels.

He’d like to be seen as doing something that no other president in recent years has done. He’s risked  alienating a madman to create some sense of progress with North Korea. So far, Trump’s unorthodox style has prevailed. But it’s early.

And who knows if Kim isn’t playing Trump?

Trump was asked that last week and downplayed it. But consider what Kim is really giving up: Nothing.

He mothballs his nukes for a while, but reuniting with Korea gives Kim everything he needs to be a much bigger world player. He doesn’t need nukes if and when he can merge with the south

Once Kim is legit, he becomes bigger and stronger and more menacing without nukes. He becomes like Trump. An acceptable mad man with bad hair.

Meanwhile, Trump just wants to point to something he’s done. In the past, he couldn’t sell steaks, water, college, or casinos. So here’s his chance to put his brand on a brokered de-nuclearized peace.

And then he can be just like Nixon in China, before the impeachment.

Trump wants it all badly. Almost as much as Kim and Moon.

But what about the people of Korea? Polls say most young South Koreans don’t want reunification. If you’re in your 50s and 60s, you want it.

But younger people in their twenties know just a few things about North Korea—that they’re poor and starving. Oh, and brainwashed. Getting the north up to speed will take money away from the south, and even raise taxes and hurt the economy.

It’s all that, and the fear that Kim is known as the madman who starves his people and has forced more than 30,000 to sneak into the south from the north. The stories they tell of their poverty-stricken lives are heartbreaking.

The north will suck up resources for sure. Will the south get a return on investment?

If people in the south are hesitant, what of the north?

If you’ve been brainwashed you just want what Kim wants. But if you’re biting your tongue and can see how modern the world really is, you can’t wait to follow the defectors and break free of your chains. I’d bet a lot more are like that, figuring out that Kim’s world is a fantasy world. If Kim is losing his grip, it’s just another motivating factor for Kim.

Kim must realize he can’t keep the citizens of the north under a primitive rock forever.

Of course, he’s a dictator. Does he become a regular politician? Does he and his army end up leading the whole country?

I don’t know what’s more dangerous. Kim with nukes. Or Kim as a legit pol? Who do you trust more?

Meanwhile, the Philippines watches, knowing it has interests with all the players.

If it continues to cozy up to China, Manila will likely go along with Beijing, watch the north and south make nice, and get out of the way.

As a former American colony, the Philippines also wants to placate Trump.

In Trump’s eyes, the autocratic Duterte can do no wrong. As long as Duterte rules with an iron fist, Trump will praise him at every turn.

So it’s a win for the Philippines if the region is indeed safer and Kim ends his nuclear ambitions. It’s just that I’d be concerned with Kim’s other ambitions.

What will Kim replace nukes with to propel himself to power?  He’s not just going to reunify and go back to playing basketball with Dennis Rodman.

Does he ultimately worm his way to the top and take over the entire unified country of Korea? And then what?

The nukes come back with a stronger, bigger, more powerful Kim? I hope they’re thinking these things through in the White House.

Judging how decisions are made in Trumpville (consider that pulled nomination of the pill dispensing White House doctor to head the Veterans Administration), not to mention the failure of the Trump administration to fill out key positions at the State Department, who knows if anyone has thought beyond a plan A down through,  B,C, D, or E.

Kim is going for a leveraged move here just like when a small company buys out a much bigger company. Just don’t discount Kim’s track record. Honorable? Uh, no.

Of course, it could be just like Trump to go forward without considering such things as Kim’s human rights violations, the humanitarian concerns, or how about the death of  American Otto Warmbier?

Warmbier is the Ohio college exchange student who was held prisoner in the north, and who was returned last year all but dead. As the summit began, his family filed suit against North Korea for torture and murder.

Warmbier’s death is no small point. Let’s not forget about it and all the humanitarian points as Trump and  the free world figures out how to allow Kim back into respectability.

It may be that all the other U.S. presidents were right to go cautiously. We’ve come this far safely.  And there’s no WWIII.

But with Trump and Kim running the show, who knows what we’re going to get.

Emil Guillermo is a veteran journalist and commentator who covered Washington in the 80s and 90s. He writes a column for the Inquirer’s North American bureau. Twitter @emilamok.  Listen to him on Apple Podcasts.