She’s a foreigner, a dayuhan, a woman from another country.

But Sister Patricia Fox does not command a navy that bullies Filipino fisherfolk in the West Philippine Sea.

She is not aligned with criminal organizations who smuggle illegal drugs into the country.

She’s not part of any foreign military power.

Still, Duterte wants you to believe this elderly nun is a dangerous woman. He wants you to see her as a threat who must be expelled.

We’ve seen her photos. We see  Sister Pat mingling comfortably with peasants and workers. We see her riding a tricycle. She’s an old woman who dresses simply and who appears at ease with ordinary Filipinos.

Yet, in the eyes of Duterte and his allies, this 71-year-old nun who has lived in the Philippines for nearly three decades is a treacherous enemy of the state. 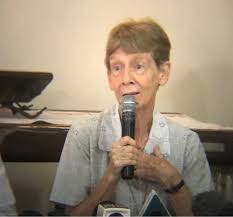 Sister Patricia Fox is being expelled from the Philippines. INQUIRER FILE

They want to kick her out of the country she has called home for many years.

Has she engaged in any activity that would considered political? Yes.

And Sister Pat has not denied it.  She has visited political prisoners in Mindanao, and has even fasted and prayed for their release, as the BBC reported.

She went to Mindanao because “the government was denying there were any human rights abuses, so we actually went to interview people who were victims, or their families were victims, and to find out if there are human rights violations and to document them,” she told the BBC.

In fact, Sister Pat has been involved in these struggles ever since she decided to make the Philippines her home, long before Duterte, long before the mass killings of Filipinos under his regime.

Sister Pat even joined efforts to help farmers at Hacienda Luisita who were arrested at a protest, as she told columnist Ceres Doyo.

Yes, that Hacienda Luisita, that symbol of the Dilawan Duterte supporters love to rail against.

She couldn’t care less what party is in charge, what faction of the Philippine elite is in power. She will defend poor people in a country she has embraced as her own.

Is she a threat? As a foreigner in the Philippines, has she ever been dangerous?

Well, she did become a bit of a challenge to the people who welcomed her to the country when she arrived in the Philippines in 1990. As Sister Pat said so herself in a statement, when she discovered that “things are done differently” in the Philippines.

“But the people in the rural areas where I spent most of my time, were so patient and laughing with me at my mistakes.”

There are foreigners, especially white visitors, who come to a country like the Philippines with a sense of superiority, a messianic complex that prevent them from becoming truly part of the communities they set out to serve.

That’s not the image we get with Sister Part.

In nearly 30 years, she patiently embraced the life and struggles of people with little power in a country where they are routinely bullied by the powerful.

It was a long process, as she recalled. And she got much help from the Filipinos she sought to serve. It was from the people in the rural areas where she first stayed “that I came to learn some of the basic issues which caused their poverty: lack of their own lands; control of markets; dependence on pesticides.”

“I stayed with tribal people and learned how the mountains are their supermarkets and pharmacies, how they were excited to have their own schools which taught sustainable agriculture but also preserved their culture. But also about how large mining and logging corporations as well as plantations were threatening the life and livelihood of these rural people.

“As I lived in the city, I came to know the situation of the workers and their lack of job security which is now happening in other countries as well. As a Christian, believing that our mission is to bring God’s Kingdom to the here and now, I couldn’t help but to get involved both with projects, such as training in organic farming, to uplift the livelihood of the farmers, but also to advocate with them for their rights to land, livelihood, peace, justice, and security, all universal human rights which the church sees as integral to her mission.”

Duterte wants you to believe a woman with such humility and commitment should be viewed with suspicion and disdain.

Duterte, who inspired a brutal campaign of slaughter and who appears to not care about foreign encroachment on the country’s territory, wants you to believe that an elderly nun whose main concerns in life are human rights, livelihood, and justice is an enemy of the Filipino people.

“Whatever happens, I will be forever grateful to all those Filipinos that I call my friends and for all those from both church and sectors who have supported me through this time,” Sister Pat said. “I may lose my right to be in the Philippines, but I can never lose the learnings and beautiful memories. “