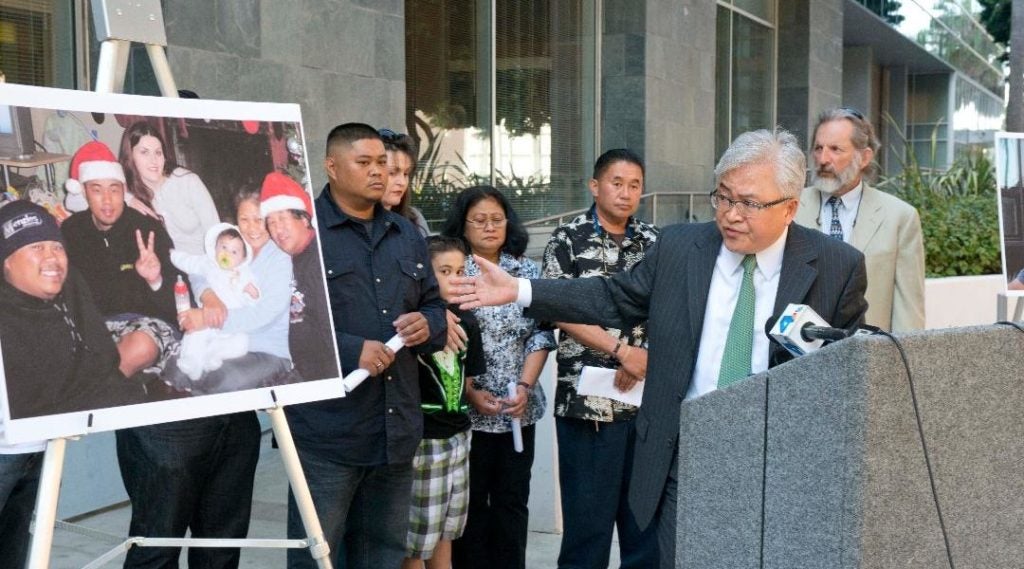 LONG BEACH, California — The city of Long Beach, California has reached a $2-million settlement with the family of a mentally disabled Filipino American man who was shot to death at an arcade by city police in 2015. The settlement is said to be among the largest approved by the city in a police brutality case.

Mharloun Saycon, 39, was at the Looff’s Lite-A-Line gaming establishment he frequented, when staff aware of his mental illness called police to help escort him off the premises after customers grew nervous of his possession of a knife.

A statement released by the Long Beach Police Department a day after the shooting said a preliminary investigation found that while officers were responding, they received an update that Saycon was waiving the knife inside the business, causing some customers to leave.

The statement said that officers arrived to find Saycon seated and armed. Upon giving verbal commands to drop the knife, it said Saycon failed to comply with orders.

Attorneys representing the family said Saycon was seated in the chair with a small pocket knife in his lap when police arrived, and stayed seated throughout the incident.

Saycon did not make any threats, nor exhibit aggression or violence, according to a news release by the family’s attorneys.  The release added that when calling police, staff made clear that Saycon was not threatening anyone and that they just needed help getting him out.

“Despite that, rather than make any effort to assess Mharloun’s mental state or speak to any other patrons at Looff’s about the situation, Officers Cruz and Nguyen immediately responded with unreasonable force,” read the release.  “Within seconds of their arrival, Cruz and Nguyen both deployed their Tasers without warning.”

“Through the tasing, beating, and shooting, Mharloun remain seated in his chair, where he died moments after being shot.  Surveillance footage irrefutably establishes that Mharloun never threatened the officers, but sat defenselessly while Cruz and Nguyen attacked and shot him,” the release read.

Joe Sayas, co-counsel representing the family, said Nguyen unloaded all eight bullets in his .45 caliber within a period of 7.28 seconds.

“The gun had a total of eight bullets, and he unloaded everything — the entire clip,” Sayas told the Asian Journal.

The city does not admit any wrongdoing in the settlement agreement.

“It seemed to be a fair settlement for all parties and it enabled us to resolve the matter without… the need for trial and potential greater financial exposure,” Deputy City Atty. Howard Russell told the Los Angeles Times.

“The case was hard fought,” said Sayas. “This small bit of justice for the Saycon family came only after a federal judge denied a motion filed by the officers and Long Beach, asking the court to declare that they were immune from suit.”

Saycon’s mother Ana Luz Saycon, and father Khanly Saycon, filed a wrongful death suit after the incident in 2016.  The Long Beach City Council voted to approve the settlement on December 5, 2017. The settlement was executed on March 6, 2018.

“All we want is our son, who deserved to live,” said Saycon’s father.  “While nothing can bring him back to us, if this case saves even just one life by holding the police more accountable for how they treat people with mental illness, that’s the most I can hope for.”

Saycon came to the U.S. from the Philippines in 1985 and studied at Santa Monica High school where he was an honor student and athlete, before attending nearby Santa Monica College.  He was diagnosed in his early 20s with bipolar schizophrenia, his family said at a news conference back in 2016.

Attorneys for the family also hope that the settlement will bring awareness to the need for better training of officers in dealing and interacting with individuals who are mentally disabled.

“A settlement of this magnitude sends a message to the City and its officers that it must improve tactics and training for officers who detect and interact with persons affected by mental health disabilities, because mental illness is not a crime,” said Cindy Pañuco, a counsel of the case.

“This settlement will not bring back the life taken,” said Dan Stormer, an attorney who represented the family.  “However, it testifies to the gravity of the case that the settlement is one of the largest in the City’s history for this type of suit.”