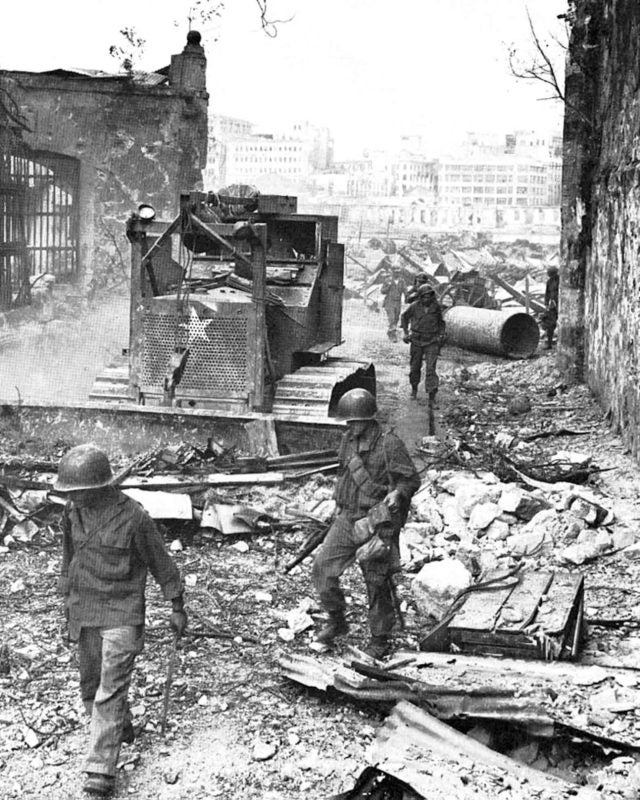 American GIs after breaching the thick walls of Intramural in February 1945.

The horrific Battle of Manila lasted for one month from February 3, 1945 to March 3, 1945. More than 100,000 Filipino civilians and over 1,000 American soldiers died during the brutal fighting. At the conclusion of the battle, Manila was in ruins.

Many historians have compared the extensive damage of Manila to the destruction of Berlin, Germany and Warsaw, Poland. It took many years after WWII to rebuild these three great cities.

In theory, there should not have been a Battle of Manila. The Japanese commander, General Yamashita, declared Manila an “Open City” when he ordered his forces to evacuate the city in early January 1945. Yamashita had followed General Douglas MacArthur’s directive from December 1941.

Yamashita, known as the “Tiger of Malaya,” saw little military value in Manila, and stated that “I do not intend to preside over the destruction of Manila.” He did leave behind a few thousand soldiers to blow up bridges to slow the American advance.

Rear Admiral Iwabuchi disregarded the orders. He planned to use his 17,000 sailors and the few thousand soldiers to counter the American advance. He wanted the Americans to pay a high price in blood to capture Manila.

The first clash in the city between the American soldiers and the Japanese happened on February 3, 1945. American forces crashed through the gates of the Santo Tomas Internment Camp to rescue the incarcerated allied civilians. During the rescue, the Japanese guards at the camp decided to take civilian hostages.

Eventually after negotiations, the guards agreed to release the hostages if they were given a safety escort off the campus. This event was the only negotiations during the Battle of Manila. The remainder of the battle was a fight to the death for the Japanese.

There was street to street and house to house fighting. Historians have compared the brutal urban battle in Manila to the fighting between the Soviet Red Army and the Nazi Germans in Stalingrad in the Soviet Union.

General MacArthur attempted several times to get the Japanese officers to surrender, but they had decided to fight to the death. Initially, the Americans were very careful about shelling buildings with artillery to minimize civilian deaths. The Japanese proved to be too tenacious. The Americans increased the shelling, which resulted in more collateral deaths of civilians. The American soldier became the reluctant destructor of the Pearl of the Orient.

The Japanese also had pill boxes and bunkers at Fort McKinley (Fort Bonifacio today). Once again, it took horrible fighting with flame throwers and light artillery to defeat the Japanese sailors. The amount of civilian and American casualties continued to increase.

There was a deliberate tactic by the Japanese to burn everything in sight. The sky above Manila was obscured by thick black smoke. The Japanese burned colleges, universities, government offices and cultural buildings containing books, artwork, and important historical documents.

The fires forced civilians to evacuate their houses and pour into the streets, where many were massacred. The areas of Paco, Ermita and Malate sustained incredible destruction and deaths. As the Japanese defeats mounted, they took out their murderous frustrations on innocent Filipinos.

By far, the largest fighting of the Battle of Manila was at Intramuros. The old Spanish enclave had walls 40 feet thick and 15 feet high. The Japanese secret police, the Kempeitai, had their headquarters inside the walls of the old fort, the notorious Santiago prison. The Japanese held five thousand Filipino hostages within Intramuros’ walls.

The Japanese in Intramuros refused to surrender or negotiate for the release of the hostages. It took massive artillery bombardment by the Americans to breach the solid walls of the old enclave. American infantry followed tanks through the gaps in the walls. The savage fighting lasted for six days. The Japanese atrocities against the Filipinos finally stopped when all the Japanese were dead.

The architectural and cultural heritage of Manila was mainly gone after the battle. The unique blend of Eastern and Western culture was in ruins. Unfortunately, in many cases, ugly modern buildings replaced the old beauty and charm of Manila.