Robredo in NY: Angat kaluluwa, or lifting our spirits

Robredo in NY: Angat kaluluwa, or lifting our spirits 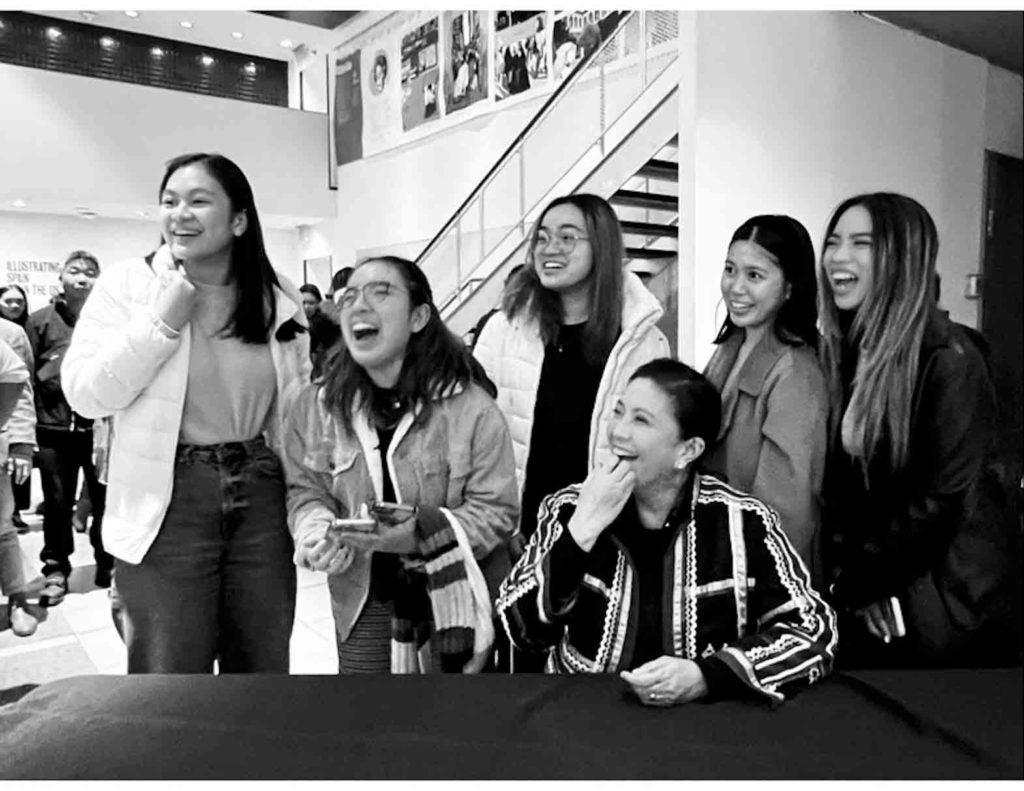 No handlers, no capricious demands, no preening,  no do-you-know-who-I-am airs: all familiar, off-putting behavior politicians believe the public expects of them. Hence, the derogatory term Filipinos have long had for this species that flourishes in the wildlands of Philippine politics —Trapo, (from “traditional politician”), or “rag.”

In sharp contrast, former vice-president Leni Robredo was and is a breath of fresh air.

In the US as a guest lecturer at Harvard, Robredo responded directly, in timely fashion, and in the affirmative, to a request to give a talk to students and the Filipino community at New York University’s King Juan Carlos Center, at its Washington Square campus.

The Center’s auditorium, which, barely a week before, held a screening of the FAMAS-award-winning feature KATIPS, was packed, the audience a mixture of students, community activists, Leni supporters, and the simply curious. Sponsored by Sulo: Philippine Studies Initiative at NYU, the Steinhardt Department of Teaching and Learning, the King Juan Carlos Center, and NYU Abu Dhabi 19 Washington Square North, the forum had the former vice-president and human rights lawyer in conversation with NYU professor Lara Saguisag, followed by questions from the audience. (Full disclosure: I teach at NYU and am a member of Sulo.)

Among the topics Robredo touched on were her experience as second-in-command of the national government, the projects she undertook while in office, the run for the presidency earlier this year, the massive disinformation campaign against her, and her plans for the future.

For most of her six-year tenure (2016-2022) there would be no room at the presidential table. President Rodrigo Duterte didn’t even want her, the 14th vice-president, to be at the inauguration that is held traditionally for both the incoming president and vice-president, with each office elected independently of the other. He did appoint her in July of 2016 to a Cabinet position, as head of the Housing and Urban Development Coordinating Council, only to be banned from Cabinet meetings in December of the same year, prompting Robredo to resign.

Much, much briefer was her appointment by Duterte in November of 2019 as co-chair of the campaign against drugs. After a mere 19 days on the job, she was unceremoniously booted on orders from the notoriously mercurial and misogynistic Duterte. Robredo had started to ask hard questions about the antidrug war, requesting classified information, and was therefore seen as less than a loyal supporter of the president.

Rather than curse the darkness, and not wanting her office to be purely ceremonial, the vice-president started Angat Buhay (Uplifting Lives), laying the groundwork for sustainable programs to alleviate poverty, that are now being continued by the non-governmental organization, Angat Buhay Partnerships Against Poverty, with its initiatives in education, housing, healthcare, and nutrition—launched on July 1, 2022, the very first day of her becoming once again a private citizen. (With a smile, Robredo recalled driving around that very first day, sans security, and how liberating it was.)

Coincidentally, Ateneo de Manila University last July announced that a new species of a water-scavenger beetle discovered in the Cordilleras has been christened Anacaena angatbuhay, in honor of the antipoverty program.

Angat Buhay’s first project is a dormitory for the indigent students at Southern Luzon State University in Quezon Province—a replication of one of the first initiatives undertaken when she was vice-president: housing for the displaced residents of Marawi City in 2017, when the city was occupied by extremist armed groups, leading to a vicious battle with and subsequent defeat by the Philippine Army. It was however a pyrrhic victory, as Marawi suffered  massive devastation from which it has yet to fully recover.

The question was raised about possible US chapters of Angat Buhay. While welcoming the interest, Robredo said she preferred to form partnerships; a chapter, she explained, will be dependent on Manila for direction while partners can undertake projects independently but ones that share Angat Buhay’s objectives.

As for the massive disinformation campaign on social media platforms aimed at her run for the presidency, Robredo said ruefully that at the outset she and her staff didn’t take the trolling seriously, believing that it would peter out. Too late they realized it was a well-orchestrated plan driven by professionals. Lesson learned, perhaps, for a possible future run—a possibility which she addressed. “If I decide to run again, it will be the result, not the motivation” of the work she and her team are doing through Angat Buhay.

Cognizant of the slings and arrows that we all have to endure in this roller coaster of a ride we call life and of the dystopian nature of much of Philippine politics, she exhorted us to not lose hope. She may have been preaching to the choir, but it was a choir that desperately needed to have its spirits lifted—Angat Kaluluwa. And lifted they were, through her implicit appeal to the better angels of our nature, with the challenge of going about in whatever ways each of us can to create a better world.