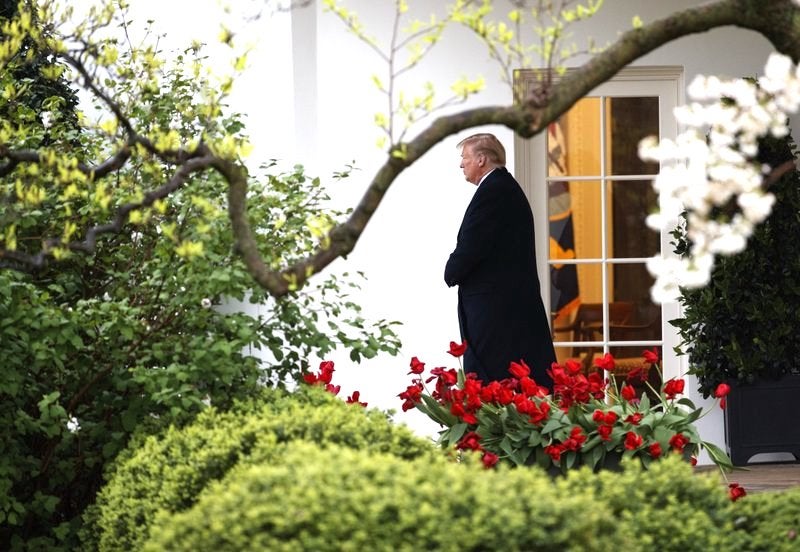 President Donald Trump walks from the Oval Office of the White House to Marine One in Washington, Monday, April 16, 2018, for the short trip to Andrews Air Force Base en route to Miami. AP PHOTO

WASHINGTON — President Donald Trump and his allies have hit a new level of anxiety after the raid on his personal attorney’s office, fearful of deeper exposure for Trump, his inner circle and his adult children — and more than concerned that they don’t know exactly what is in those records and electronic devices seized last week.

There is also some worry that Michael Cohen, the self-described legal fixer who helped make bad stories go away and took a leading role in Trump Organization projects in foreign outposts, may strike a deal with prosecutors out of concern about his own prospects.

“I think it’s a huge minefield for Donald Trump and the Trump Organization,” said trial attorney Joseph Cammarata, who represented Paula Jones in her sexual harassment suit against President Bill Clinton. “I think this is on its own track and this train is coming down the track with brute force.”

The wild legal show continued to play out Monday, at a court hearing in New York before a federal judge who is considering what to do with the material that the FBI seized from Cohen.

Trump left the White House for Florida, for a two-day summit with Japanese Prime Minister Shinzo Abe at the president’s Mar-a-Lago estate. Advisers are hoping the meeting will draw attention from the legal tempest in Washington and New York.

On the trip south, White House spokeswoman Sarah Huckabee Sanders sought to put distance between Trump and Cohen, saying: “I believe they’ve still got some ongoing things, but the president has a large number of attorneys, as you know.”

The federal raid, carried out a week ago in New York City, sought bank records, information on Cohen’s dealing in the taxi industry, Cohen’s communications with the Trump campaign and information on payments he made in 2016 to former Playboy model Karen McDougal and to Daniels, both of whom allege relationships with Trump. The court proceedings Monday dealt with who gets to look at Cohen’s seized documents and devices before they are turned over to prosecutors.

Though Cohen once said he “would take a bullet” for Trump, he is aware of the possible outcome — including potential prison time — and has expressed worry about his family, said a person who has spoken to the lawyer in recent days but is not authorized to discuss private conversations. Cohen has not been charged with anything.

Trump’s moods have grown darker in recent days, as he lashes out at the “overreach” of the raid. Further angering the president is that the raid was triggered in part by a referral from special counsel Robert Mueller, who is looking into Russian interference in the 2016 U.S. presidential election. The raid was authorized by the U.S. Attorney for the Southern District of New York.

On Twitter Sunday, Trump said that all lawyers are now “deflated and concerned” by the FBI raid on Cohen, adding that “Attorney Client privilege is now a thing of the past.” Trump has also taken to downplaying Cohen’s role.

The president also inveighed further against former FBI Director James Comey, who said Monday morning that Trump was morally unfit to be president. That was a few hours after Comey said the same and worse in a highly promoted ABC interview. 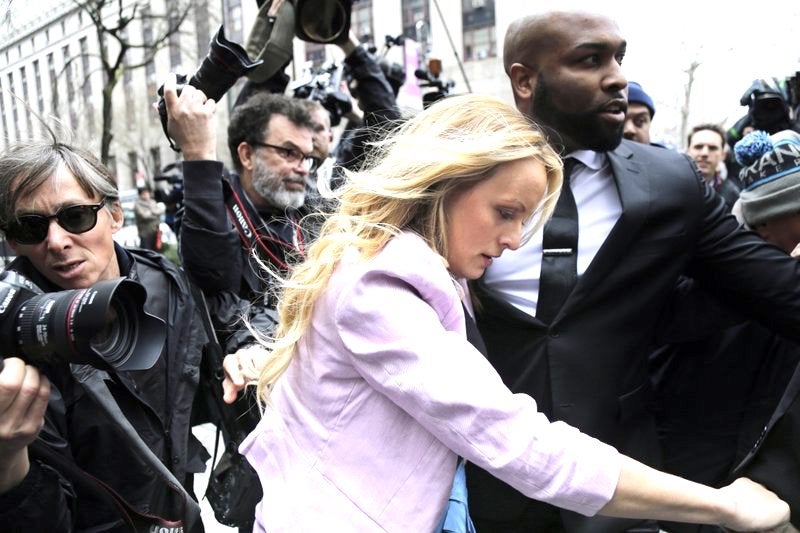 Many in the White House view the aftershocks of the Cohen raid as potentially more threatening than Mueller’s Russia probe, fearful of what skeletons may be in the lawyer’s closets, according to five officials and outside allies who all spoke on the condition of anonymity to discuss private conversations.

“I agree with the consensus forming that it’s very dangerous for the president, probably the most serious thing yet,” said Sol Wisenberg, a defense attorney who was a deputy independent counsel during the Starr special counsel investigation into Clinton. “Even if you shut Mueller down some way, how do you shut down the Southern District (federal court)?”

Trump’s anger at the probe has intensified, with him musing publicly about firing Mueller and the man who authorized the probe, Deputy Attorney General Rod Rosenstein. Those around Trump have hoped that this week’s visit to Mar-a-Lago, where he is generally happier, along with the tightly scheduled summit with Abe, would somewhat distract him from Cohen and from Comey’s ongoing publicity tour.

But White House aides have also expressed worry that they can control Trump less at his palatial Florida estate, where he is known to seek out counsel from club members and get revved up by their at-times provocative advice. One recent presidential dinner guest was Hannity, a longtime Trump ally whose connection to Cohen shed more light on the attorney who was more than just a lawyer for Trump.

Cohen has long been a key power center in the Trump Organization and a fixture along the edges of Trump’s nascent political life. In Cohen’s own estimation, he is Trump’s Ray Donovan, the bruising television character who takes whatever steps are needed to fix problems for the tycoon he serves.

He has regularly threatened lawsuits against those who pose a challenge to Trump. He has berated reporters for writing unflattering words about his boss. He has worked with tabloids, including the National Enquirer, to kill unfavorable stories about Trump. He has said he used a home-equity loan to finance a $130,000 payment to Daniels in the final days of the 2016 campaign and did so without Trump’s knowledge.

The president has consistently denied a relationship with Daniels, who claims the two had sex not long after first lady Melania Trump gave birth to the couple’s son Barron. He has also pushed back against other claims from women.

A recent Trump fundraising email praised Mrs. Trump, with the president calling her “my rock and foundation.”