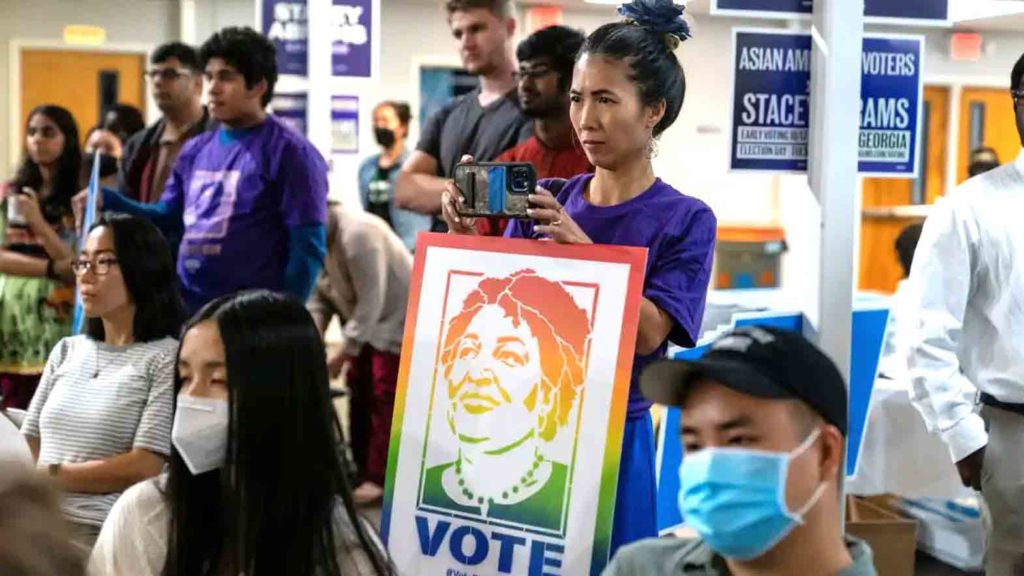 I was watching Republican Allan Fung, dubbed by Fox as one who could flip Rhode Island’s decidedly blue Cong. District 2. When he lost, I knew some election day prognosticators would be confounded.

Society did not exit from democracy on Tuesday. Voters went to the polls and saved it.

That included many Asian American Filipinos, and thanks to the AALDEF exit poll, I will share what some of them.

But don’t think Tuesday was a return to normalcy where losers conceded gracefully and we were all working together. It’s not that normal yet. There’s still some odious Trumpism present.

Yes, election deniers mostly lost on election day. But the Jay Chen deniers won. And for that, we must say, shame on you Michelle Steel.

Make that Michelle Park Steel. That’s her name when the Korean American isn’t hiding behind her GOP operative husband’s surname and wants to show her AAPI-ness.

Steel is going back to Congress representing California District 45, but she did it by lying and slurring the good name of her Democratic opponent, Jay Chen.

First, she played the victim game by falsely claiming Chen was making fun of her accent. He wasn’t.

But then as the race tightened in October, Steel doctored ads to make it look that Chen had ties to the Chinese Communist Party and was teaching propaganda in schools. That wasn’t a red wave, more a red splash of racist lies.

Chen, a decorated Navy intelligence officer, whose grandmother fled China for Taiwan, and is a proud Asian American was being portrayed by Steel as a communist sympathizer. He definitely is not.

But Steel made that her doubly racist, Asian-on-Asian weapon, pandering to her constituents in the Little Saigon part of Southern California’s Orange County. And then by defiling Chen’s good name.

Steel already had the white conservatives in Orange County. But there’s nothing like a little racism to invoke generational trauma in the Vietnamese community to boot.

District 45 is a strange mix in Southern California, with the larger part in conservative Orange County. That enabled Steel to win handily 55 percent to 45 percent.

But a smaller part of the district is in Los Angeles County, which Democrat Chen won 53.9 percent to 46.1 percent.

That’s redistricting for you. Steel already had a huge advantage over Chen. But then she added a little racism just to make sure. She must have figured she had lots of money pouring in from Kevin McCarthy’s PAC. What’s a small lie compared to “the big lie”?

It’s still despicable, and yet Steel’s going back to Congress.

After the racist lies in her campaign against a fellow Asian American, how can she be trusted seen as a worthy public servant?

What does an Asian American think? That’s not just a subtitle of the daily webshow I do, it’s what people should want to know about us on all issues great and small. Because we’re here.

And we won’t be ignored.

But we are, ignored that is. When does anyone ever highlight us in media exit polling. There’s never a big enough sample to get a reliable sense of what we think when they think to think of us.

Enter the AALDEF exit poll for the 2022 midterm elections, a multilingual (11 languages, including Tagalog) poll of 5,351 Asian American voters  in 15 states on Nov.8.

For me, it served as confirmation that roughly two-thirds of Asian American voters are Democrats, with a third Republican. That was true for the House, Senate and Gubernatorial races.

But 2022 was not just about donkeys and elephants, this was an election about the fight between the election deniers vs. the defenders of our democracy.

When asked if the outcome of the 2020 Presidential election was legitimate (asked in DC, Louisiana, Massachusetts, Michigan, New Jersey, Texas and Virginia only) 59.2% percent said Yes.

Compare that with the national generic numbers in the CNN exit poll, where 63% said Yes. But more than a third said No.

Asian Americans aren’t election deniers. And they offered up a higher approval rating for Joe Biden, 45.3% vs. 31.4 disapproval; 23.3% said they didn’t know.

Asian Americans also won’t deny your right to an abortion, according to the AALDEF exit poll.

Abortion was ranked high in mainstream exit polls after inflation as a motivating factor to vote.

Exit polls are also famous for asking other extraneous yet relevant questions along the lines of “while you’re here, let me ask you about…”

So, when asked if one had been a victim of anti-Asian harassment or violence in the past two years, only 21.6% said Yes; 78.4% said no.

These are answers the mainstream public should be interested in.  But what does it mean? That non-voters are more likely victims?  Or it could mean that the more you are a full participant in the system, the less likely you are to be a victim of anti-Asian harassment or violence. Perhaps that’s one more motivation to vote.

Another area that was surprising was on the question of trans rights. When AAPI voters were asked if they support laws to protect transgender people from discrimination, 65.2% supported; 20.9% said don’t know; 14% were opposed.

Who would’ve known? The large number is a revelation for me with transgender members in my family. I am glad the question was asked.

It’s important in an era when school boards are the latest battlegrounds in the battle for inclusion or censure. The past is important, but so is the present because every Asian American first is history.

And this election there was one small one worth noting.

Do you know Kenneth Mejia?

I am more Norcal than SoCal, but my Los Angeles friends were telling me about Kenneth Mejia for some time.

Mejia, 34, a Filipino American CPA allied with progressive labor groups, won for Los Angeles City Controller, the guy who signs the checks. Mejia beat a veteran termed out Los Angeles City Council member.  And he won convincingly by a landslide.

Mejia is a bit of an odd duck wild card. He’s outspoken and has had to delete some tweets in the past. But he’s also an accountant. A fiscal progressive? In this long game of politics, I’d say he’s both evolving and emerging as a new generation pol to watch out for—in a good way.

Interesting to note, he did not appear to have the endorsement of Filipino American pol of the hour, Rob Bonta, the California attorney general. (While votes were still counted, Bonta was leading in his race). I suspect Mejia was considered too extreme for the generally progressive Bonta, at least for now.

So on the national scene, we may have averted disaster with a rousing win for democracy.But these local races help define Nov. 8 too.

Michelle Steel is a shameful disappointment. Was Trumpism rebuked on election day? Steel’s Asian Trumpism is disgusting and still won. It shouldn’t have.

There were also negative things that were observed by AALDEF poll watchers, significant things like missing interpreters, or poll workers asking for identification.

But we can take hope from the emergence of young pols like Mejia, and an understanding of what AAPI are thinking as they exit the polls.

AAPIs  engaged and involved, are definitely positive signs in our democracy.

See his webshow on www.amok.com.