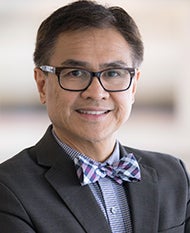 DAVIS, California — A Filipino American doctor, who graduated from the University of the Philippines, will lead a team of more than 300 scientists with an estimated $90 million in annual research funding.

Dr. Primo Nery Lara Jr. has been named director of the National Cancer Institute-designated UC Davis Comprehensive Cancer Center, a clinical enterprise that serves more than 10,000 adult and pediatric patients throughout the region every year.

“Dr. Lara is well-respected among his peers and his advice is sought by many,” said UC Davis School of Medicine Interim Dean Lars Berglund. “He is a resourceful and experienced leader, and I know he will build upon the strong foundation already in place at the Comprehensive Cancer Center to bring it to new heights and continued national prominence. With instrumental institutional support from both UC Davis Health and UC Davis, he is well-positioned to do so.”

Lara completed his medical residency at Rush University Medical Center in Chicago and received his Doctor of Medicine degree at the University of the Philippines.

The first Filipino American to lead an NCI-designated cancer center, Lara emigrated to the U.S. in 1992 from Manila; he is now a naturalized U.S. citizen. He is one of eight children raised by a single mother, all of whom now live in Northern California. He is married to Elizabeth Lara and has two sons, Joshua and Matthew, both undergraduates at Stanford University. The family lives in Davis, California.

Lara’s move into the director’s role comes with unprecedented commitment and support from the university and health system, with enhanced resources to meet the National Cancer Institute’s more rigorous requirements and the growing clinical needs for advanced cancer care in the region.

Lara, 52, replaces Ralph de Vere White, who retired in 2016. As director, Lara will hold the Codman-Radke Chair in Cancer Research and serve as executive associate dean for cancer programs. Lara was selected for the position after a national search; he has served as acting director since July 2016.

UC Davis Health is nationally ranked leader in health care research and in health care delivery.UC Davis is the only NCI-designated comprehensive cancer center that cares for patients throughout the Central Valley of California, a diverse region of more than 5 million people.

Known to most as “Lucky” Lara, the new director began his career at UC Davis as a hematology-oncology fellow specializing in cancers of the lung, prostate and bladder. He was invited to join the faculty in 1999.

Lara is an accomplished scientist, with principal research interests in the field of developmental therapeutics and in cancer clinical trials development. He has served as the cancer center’s associate director for translational research, which takes novel therapies from the laboratory into the clinic to benefit patients, since 2008. Lara has chaired or co-chaired many trials from phase I to III and has authored or contributed to more than 200 peer-reviewed scholarly papers, most of which describe research into novel cancer therapies.

In March, Lara was named incoming deputy chair of SWOG, a leading international cancer research organization, where he will also oversee the National Clinical Trials Network portfolio of treatment trials.

Lara is active in medical education and training, serving as principal investigator of the NCI-funded K12 Paul Calabresi Clinical Oncology Training Grant, which trains junior faculty scholars to be independent, patient-oriented cancer researchers. He also chaired the American Society of Clinical Oncology’s Continuing Medical Education Subcommittee in 2012-2013 and was Education Committee chair of the International Association for the Study of Lung Cancer from 2011-2013.

Among Lara’s key priorities are building on the multi-disciplinary programs and projects across UC Davis to develop novel approaches to diagnose, monitor and treat cancer.