Cryptocurrencies saw a second day of sharp declines on Wednesday, as investors continued to fret about the stability of the sector and the financial health of major exchange FTX despite plans for a rescue deal from bigger rival Binance.

The proposed deal between high-profile rivals followed week-long speculation about FTX’s financial health that snowballed into $6 billion of withdrawals in the 72 hours before Tuesday’s deal, raising questions about the solvency of one of the world’s largest crypto exchanges.

FTX and Binance did not disclose the terms of their agreement, and markets face fresh uncertainty over whether it will proceed.

Bitcoin, the biggest cryptocurrency by market value, was down 5.5% on the day at $17,656, after a 10% plunge on Tuesday that marked its worst day since mid-August. Ether, the next largest, extended losses on Wednesday to hit its lowest since July.

FTT, the smaller token tied to FTX, was down 16% after collapsing 72% on Tuesday. Its market cap dropped below $600 million, down from around $3 billion at the start of the week, according to CoinGecko data. 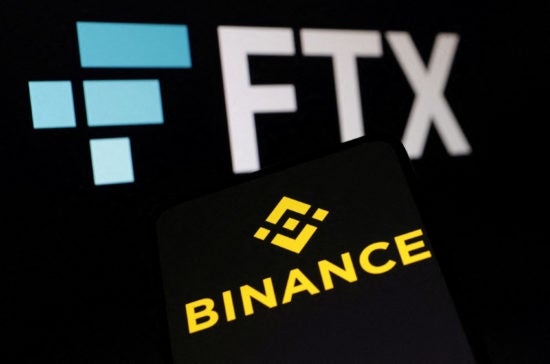 Binance and FTX logos are seen in this illustration taken, November 8, 2022. REUTERS/Dado Ruvic/Illustration

“What if the deal doesn’t go through, or (Binance CEO Changpeng Zhao) comes back and says I’ll give 10c on the dollar? That’s the blind spot the market is not ready for,” said Scottie Siu, investment director at Axion Global Asset Management in Hong Kong.

Zhao tweeted a letter to staff that there was no “master plan” behind the deal and that “FTX going down is not good for anyone in the industry” and is not a win.

“Regulators will scrutinize exchanges even more,” he said in the letter, earlier reported by the Financial Times. “Licenses around the globe will be harder to get.”

Zhao also urged investors not to trade FTT tokens and to ignore the prices.

The turmoil at FTX is the latest sign of trouble in the fast-moving world of cryptocurrencies. Crypto prices have slumped this year as a broader downturn in financial markets prompted investors to ditch riskier assets. After rapid growth in 2020 and 2021, bitcoin will be down around 62% in 2022.

Binance coin, the token used on Binance, was not spared either. The world’s fourth biggest cryptocurrency, with a market value near $50 billion, was at $299, down 8.8% on the day.

“It has been a truly devastating year for the industry,” said senior researcher Ryan Wong at Huobi, a crypto trading exchange, who said that the turmoil in the industry would “lead to massive distrust from the public towards centralized establishments, which would, in turn, lead to even stricter regulatory impact.”

“We expect more headwinds ahead as events unfold due to FTX’s involvement with many institutions.”

Some analysts drew parallels with the collapse of the stablecoin TerraUSD and its linked token Luna earlier this year, which set off a series of bankruptcies at Singapore fund Three Arrows Capital and U.S. fintech firms Voyager Digital and Celsius.

FTX allows users to buy and trade cryptocurrencies, which can be held on the platform.

Its CEO Sam Bankman-Fried said his teams were working on clearing the withdrawal backlog, though uncertainty in the market about the bailout’s status and the depth of problems kept traders nervous.

“Crypto players are reacting quicker to news and rumor, which in turn builds up a liquidity crisis much faster than one would have seen in traditional finance,” said Fabian Astic, head of DeFi and digital assets at Moody’s Investors Service.

He attributed this to the “limited transparency and uneven regulation in crypto finance.”

It is unclear how regulators will regard a deal between the two crypto exchanges. U.S. antitrust enforcers could insist on looking into the merger, antitrust experts said.

The U.S. operations of Binance and FTX are not part of the deal, said Bankman-Fried, who is from California but lives in the Bahamas, where FTX is based.

Binance is also under investigation by the U.S. Justice Department for possible violations of money-laundering rules, Reuters reported last week. That is one of a series of investigations this year into Binance’s troubled history with financial regulatory compliance.

Singapore state investor Temasek Holdings, an FTX shareholder, said in emailed comments to Reuters: “We are aware of the developments between FTX and Binance and are engaging FTX in our capacity as a shareholder.”