Marah Sotelo, actor with a day job, is ‘Gypsy’

Marah Sotelo, actor with a day job, is ‘Gypsy’ 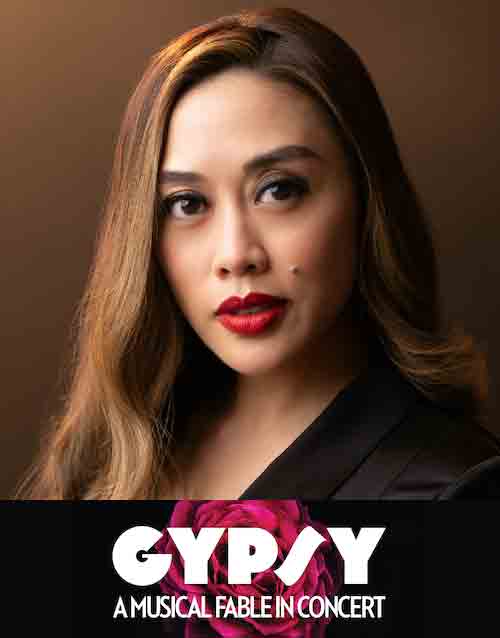 Marah Sotelo is performing in 42nd Street Moon’s production of Gypsy: A Musical Fable in Concert with four performances in two venues CONTRIBUTED

SAN FRANCISCO – It was not too long after Marah Sotelo and her family had moved to the United States from Bacolod City in the Philippines and settled in a suburb of Illinois when her mother, a nurse, introduced her to the magical experience of musical theater when she was eight.

Now, Sotelo is performing in 42nd Street Moon’s production of Gypsy: A Musical Fable in Concert with four performances in two venues on Nov. 3 and 4, 7:30 p.m. at the Heritage Theater in Campbell, California, and on Nov. 12 and 13, at 7:30 p.m. in San Francisco Alcazar Theater where 42nd Street Moon’s In Concert series features a stripped down production of acclaimed and popular musicals with the actors/singers backed by an orchestra.

Gypsy is a Tony-Award winning stage musical loosely based on the memoirs of Gypsy Rose Lee, a burlesque show stripper. Sotelo plays the lead character “Louise” who eventually becomes “Gypsy Rose Lee.” “Louise” has a complicated relationship with her mother “Rose,” the “ultimate stage mother,” who forces her into stardom.

Sotelo’s mom “was really into the classics like Gypsy and Guys and Dolls. Just the idea of mixing acting, singing, and dancing; that was really exciting for me,” she says. She her youngster to see several musical theater productions at the local community theater.

“I remember seeing The Pirates of Penzance. We saw Oklahoma.We went to go see a lot of the Disney stuff that was touring as well at the time.” Singing and dancing were part of Sotelo’s childhood. “It’s a big part of Filipino culture. I was exposed to it at a young age.”

Eventually, she went to a middle school that had “a really great music program” where she was involved in interesting  and off-beat musical theater productions geared towards seventh and eighth graders. “I remember doing this one musical that was like Oklahoma meets Romeo and Juliet. It was a story about two feuding families, but it took place somewhere down South and the music was very much like Oklahoma.”

Being part of this production was a pivotal moment. “It was a big deal because I actually ended up getting a leading role in that.” The experience gave her a sense of confidence in doing musical theater. “The theater bug really bit me in middle school.”

In Schaumburg High School, in a northwest suburb of Chicago, Sotelo continued to be involved in the theater department and be a part of theater productions such as Once Upon a Mattress, Guys and Dolls, and Cabaret.

But it was when she saw a touring production of Miss Saigon at Drury Lane that she “got really, really excited” about musical theater.

“It was the first time I saw someone that looked like me playing a leading role. And so it was through Lea Salonga and her work that I got really interested in musical theater.”

Seeing more diversity on stage showed her the possibilities that musical theater can offer. “It was a culmination of all those things” that led Sotelo to fall in love with performing on stage and later become an advocate of diversity and inclusion.

Sotelo majored in vocal performance in college but with “a mixture of doubt” and still being in the process of “exploring all kinds of things” changed her major half way through, thinking, “I don’t know if I really want to do this for a living.” She ended up graduating with an education degree and worked for a long time as an elementary school teacher.

But the lure of theater was something she could not escape and, on the side, she was performing in local theater productions. “That’s kind of how I stuck with it. I’m no longer a teacher, I’m now a project manager. That’s my career. But, you know, as Filipinos, we moonlight and we have a day job. I think I found that happy medium.”

After living in Champaign Urbana in central Illinois with her husband, they had a short stint in Chicago before moving to San Francisco seven years ago. Before long, Sotelo became part of the San Francisco Bay Area musical theater scene.

Atypical of most Filipino parents, Sotelo’s were quite supportive of her career choices and never pressured her and her brother to follow a certain path. “All they wanted was for us to go to school and do our best. They let us carve our own way through life.”

But like her character’s mother in Gypsy, Sotelo sometimes wishes that her own mother pushed her more, to a certain extent, in pursuing musical theater as a career in the past.

“There are definitely those times when I was kind of like, ‘why didn’t you push me more?’ Not that I want a tiger mom or a stage mom. But it’s kind of funny how I grew up completely opposite of all that. I do feel really lucky that I was never really pressured to do anything or to be anything.”

Sotelo’s mother, who now lives in San Diego, would still come to see all her shows. “She’ll fly up to San Francisco and see every show that I’m a part of. It’s been wonderful.”

If given the chance, Sotelo confesses that she would consider a full-time career as an actress, but certain things prevent her from pursuing acting full time. “A lot of it is, unfortunately, the system. It’s difficult to be a part of a system that needs work and needs help.”

This “system” is currently being challenged and slowly being changed by shifting societal norms, and Sotelo has also come to a point of “caring less what the world says.” She  she used to be afraid of just getting into an audition room when she was younger. “You look around and you see other people that are called back and no one looks like you.

There also would be moments when she gets called back for a role but she thinks the role needs to change. Instead of being afraid and discouraged, Sotelo has decided that she “would just keep pushing and keep showing up for these auditions where [roles] wouldn’t traditionally go to people who look like me.”

Sotelo has a word or two for casting directors: “There are so many people like me out there who have what it takes. We have the talent. Maybe we’re just not what you are imagining, but I want to show you that we can be put in these roles.”

Her approach to playing traditionally white characters is from a universal perspective and that these characters are fictional.

“I never look at it as if I’m playing a white person. Not at all. I’m playing a human being who is complex. These are made up characters based on real life human beings that have experienced all these things that we can all relate to.

“I actually find it beautiful when a person of color can come in and portray these roles because there’s just so much nuance. There’s so many things that you can do. That’s what I find exciting as an actor.”

Like her mother, Sotelo loves “a lot of the classics” but also thinks that “new stories need to be told, especially for people of color.” She adds that she loves “being up on stage, being visible and inspiring other people.”

She gets excited about seeing young audience members seeing “themselves” on stage. “I didn’t get that when I was younger. It was very difficult for me as a child to imagine myself up there.”