Domestic violence is ‘healable and preventable’

Domestic violence is ‘healable and preventable’ As a freshman at University of Texas at Austin Deborah Tucker did not find campus life an extension of the safe and loving home she grew up in.

Some creepy guy harassed Tucker and her two roommates. He stalked them and kept trying to break into their apartment, so they reported him. The police couldn’t catch him but they surveilled their place for a week. The stalker was watching.

“As soon as the cops were pulled off, the guy broke in again. And unfortunately, we had a friend staying with us that particular weekend, and he assaulted her,” Tucker said during an October 28 media briefing organized by Ethnic Media Services.

Tucker has been advocating against the use of violence against women ever since. She founded the Austin Rape Crisis Center, the Austin Center for Battered Women and is current president of the National Center on Domestic and Sexual Violence(NCDSV).

“I’ve pretty much earned every one of these bright white hairs doing this work,” Tucker says. 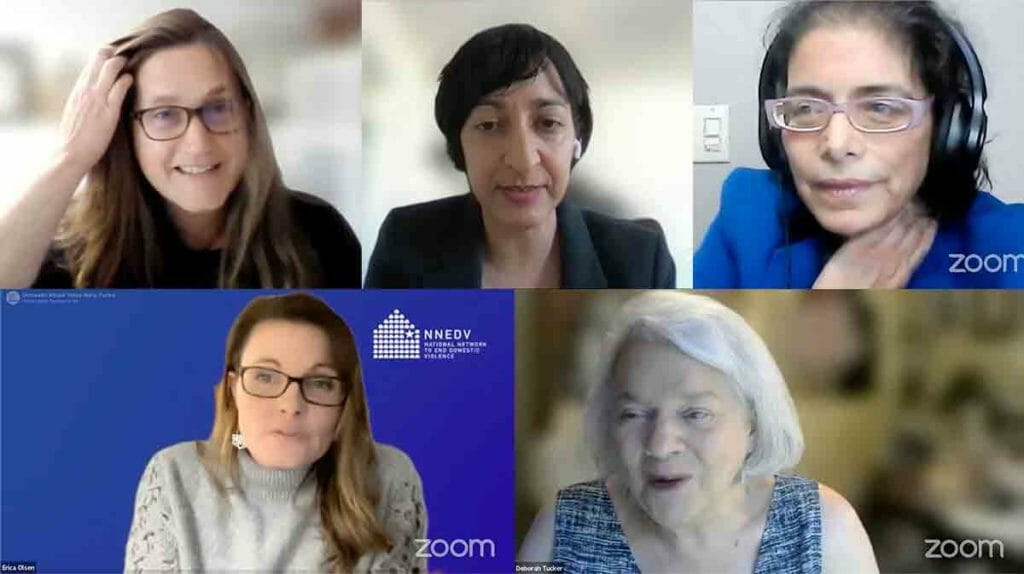 Domestic and sexual violence occur across the world in every culture, including in California, where “more than half of have up close and personal experience” with it, says Jenna Lane, communications officer with the Blue Shield of California Foundation. “It is truly everywhere, which is troubling.”

“It can also be emotional. It can be financial, like controlling someone’s money or getting them fired from their job…. It can be legal, like threatening to call immigration on someone,” Lane says. The big question is “What to do about it?”

“DV is everywhere; it is healable: it is preventable,” Lane says.

Tucker, who co-founded the National Domestic Violence Hotline in 1996, went to Washington in 1974 to help then Senator Joe Biden work on the first rendition of the Violence Against Women Act (VAWA). It has been reauthorized a few times, most recently in March 2022.

The law authorizes an array of supportive services, including funding for different DV programs, giving victims the choice to go to court instead of mandatory arbitration, and increasing services and support for survivors from underserved and marginalized communities—including for LGBTQ+ survivors of domestic violence.

Good statistics on DV are hard to come by. A lot of DV occurs between intimate partners and is often not reported.

States also define DV differently, an issue that exists even between various state-level agencies within a single state. For example, in California courts have a penal code for criminal cases, a family code that controls family court, and civil code for civil court.

“Domestic violence isn’t even uniformly defined across those codes in the same state,” says Pallavi Dhawan.

Dhawan was a prosecutor in the Family Violence Unit of the Los Angeles District Attorney’s office. “I spent 13 years handling really horrific cases of murders and rapes and attempted murders,” she says. And Dhawan was good at it. In 2019 she received the L.A. County Bar Association award for Prosecutor of the Year.

Dhawan now works out of the City Attorney’s office, which sponsored California Senate Bill 1141, legislation that adds coercive control to the definition of domestic violence within the Family Code.

The bill relied on research that estimated between 60% and 80% of female domestic abuse survivors have experienced coercive control.

“I was tired of hearing people say that domestic violence requires physical abuse and bruising. And I heard that in court a lot, and I heard it from jurors and judges, “ Dhawan says.

Common forms of coercive control include isolation, deprivation of resources, monitoring a person’s movements and behavior. It’s all of those things that strip away a person’s autonomy and reduce them to a shadow of their former self, Dhawan says.

Erica Olsen is the Safety Net Project Director at the National Network to End Domestic Violence (NNEDV), an umbrella for nearly 2000 local domestic violence programs nationwide. She focuses on the role of technology in DV cases.

“Abusers will misuse any kind of technology as a tool of abuse,” says Olsen. “Some abusers may install a hidden app or monitoring software on a partner’s device without their knowledge. Some may misuse social media sites or smart devices in the home as a way to harass or stalk.”

Tactics include tracking someone’s location without their knowledge, or hijacking financial or social accounts to commit fraud or impersonation, distributing intimate images without consent or posting threats or harassing content online. For LGBTQ survivors, their abusers may specifically threaten to out them online. “That’s a very common tactic,” says Olsen.

A piece of the new VAWA includes a provision for Civil Action for Nonconsensual Image Sharing, which gives survivors an option to go to court to recover monetary damages and access to protection orders.

The Department of Justice says rape arrests from 1980 to 2015 dropped from 26,000 to 15,000. That indicates the efforts to combat DV are working. To end it, advocates say more must be done proactively on the prevention side with victims and their abusers.

“Here in Texas, we did a huge study a few years ago of everyone who was in prison for having committed murder or a serious violent crime, and the 80% rule came out,” says Tucker, in reference to life-changing events that predict abusive behavior. According to her findings, 80% of inmates included in the study grew up in families where domestic violence was used.

Whenever Tucker works with lawmakers she reminds them “that 80% of the people that we lock up for murder grew up and had to deal with the use of violence against themselves or someone they loved very, very early in life.”

When it comes to improving legislation, she adds, “If we want to stop the worst of the violence… we gotta stop domestic and sexual violence. It’s all interconnected,” she says.