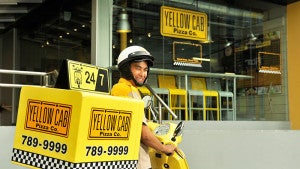 HONOLULU — Yellow Cab Pizza, the New York-style pizza restaurant founded in the Philippines, officially opened its first U.S. branch at 801 Dillingham Boulevard in the neighborhood of Iwilei in Honolulu, Hawaii.

With over 130 locations worldwide, Yellow Cab Pizza is one of the 14 brands owned by Max’s Group Inc.(MGI), which also includes brands such as Max’s Restaurant, Pancake House, Teriyaki Boy, Dencio’s and Krispy Kreme.

It was registered as a trade name by the International Restaurant Group, Inc., whose partners include Michael and Maly San Luis, owners of the nearby Filipino restaurant, Max’s of Manila.

To mark its Hawaii debut, Yellow Cab gave away free pizza to its first 50 customers.